Imagine a city that is not addicted to fossil fuels. How would that change the way we live, work, and move around the city?

The Urban Futures Studio proudly presents the Post-Fossil City Contest. We are calling on artists, designers, architects, urbanists, authors, photographers, filmmakers and all-around creative thinkers to imagine a city that is no longer reliant on fossil fuels. Proposals in any shape or form are welcome: from illustrations, 3D models and essays to videos, products and interventions.

The deadline for submissions is February 24. The jury will select ten finalists, who will receive €1,000 to further work out their plans with support from our curatorial team. The finalists will present their proposals at a public event in Utrecht on March 16. The finalized works will be included in the Post-Fossil City Exhibit in Utrecht, which opens on June 15. From these ten, the jury will select a winner, who will be awarded €10,000.

The Post-Fossil City Contest is now open! The deadline for submissions is Friday February 24. A jury will select the ten best proposals.

In order to make the future, we first have to imagine it.

Fossil fuels have shaped the world as we know it. They have defined how we move around in our cars, generate electricity, how we produce and consume food, run our economies, and design our cities. As we’re moving towards a post-fossil future, our addiction to coal, gas and oil will come to an end. This transition and new era will reshape cities and everyday life so radically that it’s hard to imagine what it will feel, taste, smell, and look like.

Innovation is the result of responding with ideas to problems. Both the automobile and bicycle were developed in response to dissatisfaction with transportation by horse, and as we know, these means of transportation continue to make an impact on our environment. Planners and architects like Cornelis van Eesteren, Robert Moses and Le Corbusier designed cities for car traffic — machines for living, focused entirely on efficiency. Today, their ideas are seen as failed utopias, that have nonetheless strongly influenced the urban landscape. Let us design — aspects of — a new, post-fossil city, adapted to this major challenge of our time? Do you think this city would be a utopia or a dystopia, and which problems might arise in the process of achieving this?

The Urban Futures Studio asks creative thinkers and makers to take the problems of our current cities as a starting point, in order to imagine the everyday texture of the post-fossil city. We would love to hear and see your ideas. 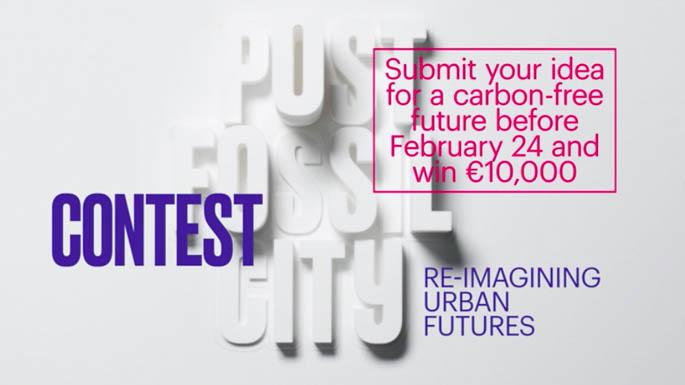