Official opening of “Q-Village · Gangtou” International Young Designer Competition is coming！Join-in the revival of the village with the power of design, discover lost cultural memories in the continuation of rural life and aesthetics, and rebuild the confidence of rural culture.

Standing at a turning point in history, we must play our part in the continuation of cultural legacies and the revival of cultural intelligence if we are to witness the magnificent transformation of this centennial village, discovering traditions that are uniquely Chinese rooted deep within, sparking innovation and vitality embedded within the village.

Under this premises, “Q-Village · Gangtou” International Young Designer Competition is ready to activate rural spaces with the power design and innovation efforts, thus educating and enhancing the fun features of rural built spaces.

Gangtou Village Is a 600-year old traditional village in Huadong Town, Huadu District, Guangzhou, Guangdong Province, Gangtou Village covers a total land area of 2.83 km2. In the south, the village features a typical Cantonese dwelling layout that resembles a comb, which is known as “comb-style layout”. With water on east, south and west, the village has four streams meeting in the south to form a beautiful harbor, hence the old saying “three streams run northward and four streams return to their origin”. With such a favorable geographical location, the village was once built with a freight port in ancient times, serving as a vital hub for land and water transportation in Huadu. Enjoying great prosperity and fame, it was also widely praised in the common saying “Gangtou Village in the east and Langtou Village in the west”.

The general layout and building form of ancient Gangtou Village, together with its unique harbor-style idyllic view, are still very well preserved. There are seven ancient alleys in the village, each about 3m wide and 85m long. About 40,000m2 of ancient buildings of the Ming and Qing Dynasties as well as the Republican Period are well preserved in the village, including private houses, ancestral temples and ancient bridges, making it an “open-air museum of Lingnan architecture”.

Overview of “Q-Village · Gangtou” International Young Designer Competition
In response to the rural revitalization strategy, Gangtou Village, with its inherent Lingnan cultural legacy, aims to build a Lingnan-sytle demonstration village under the Beautiful Countryside Initiative by rediscovering and recreating the spatial values of the historical village. In this context, “Q-Village · Gangtou” International Young Designer Competition is launched to solicit innovative design proposals on space renovation and trade mix planning. The design proposal should focus on enhancing the interest of rural spaces and avoid mass demolition or reconstruction. Meanwhile it should provide solutions for renovation of traditional buildings and trade mix planning of cultural and creative industries. The specific functions are subject to the designers and some descriptions on future operation and business model are required. 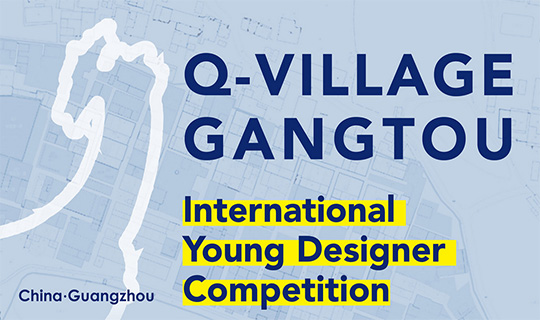