RE-IMAGINING THE ATHENAEUM OF PHILADELPHIA

Celebrating its 200th anniversary in 2014, The Athenaeum is an independent member-supported library and museum that engages members, scholars and the interested general public.

A vital on-site and on-line community, it actively celebrates the cultural and intellectual life of Philadelphia with historical, design, literary and educational activities.

Looking Forward is a conceptual architectural design competition which challenges architects, designers and artists to imagine an Athenaeum of the future. Imagine: After three years of careful dismantling, moving, painstakingly re-assembling and most importantly, restoring, John Notman’s historic Athenæum building has finally arrived at its new location in Fairmount Park, where it will serve as the headquarters of the newly formed Philadelphia chapter of the Friends of Brownstone (PhilaFOB). Flush with government funding from lottery and fracking revenue, PhilaFOB made the Athenæum Board of Directors an offer it couldn’t refuse. So now, for the first time since 1845, the lot at 6th & St. James Streets is vacant, and the Athenæum, still a vital independent lending and research library, with growing architectural and design collections, must re-imagine itself without its historic building. Given its location and its corporate purposes, what might a mid-21st century Athenæum look like? 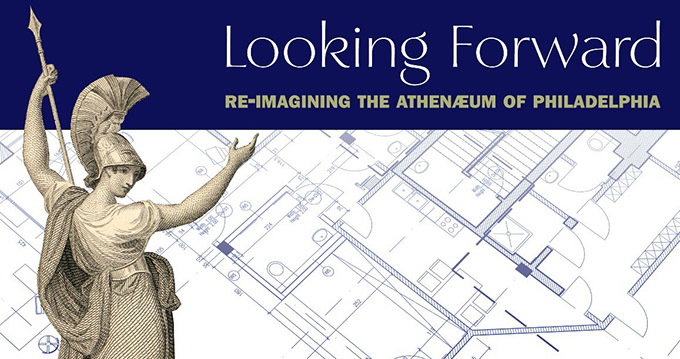