RECONVEXO is a competition of ideas for the reuse of the remaining staves from the expansion works of Rio de Janeiro’s Subway.
There are more than 6,000 staves originally intended for the tunnel connecting Line 4 to Gávea Station.
This stretch should have been inaugurated along with other stretches executed for the Olympic Games Rio2016. Today, due to the financial crisis in the State of Rio de Janeiro, the execution of this expansion work is indefinitely on hold. The result is a huge amount of precast concrete parts with no certain destination.
To reinterpret its possible uses, to redefine its meaning: this is the purpose of the RECONVEXO Competition.

INTRODUCTION
​
A major event in its size and complexity, seen as a great opportunity to attract investments and accelerate the application of internal resources, the Rio2016 Olympic Games have leveraged transformations in Rio de Janeiro.
With resources of around R$30 billion from the federal, state and municipal governments and from public-private partnerships, the city moved from the relative stagnation of the previous decades to a massive process of urban reformulation.
Considering that the main legacy of the Rio2016 Olympic Games is not properly the construction of sports equipment, and that these, like other structures, should not suffer the side effects of ostracism and underutilization, would the Games have contributed effectively to the implementation of a medium or long-term Urban Policy?
Have we expanded the city infrastructure in the right direction?
Were the Games really catalysts for a fairer city?
After all, who were the main beneficiaries?

Immaterial legacy
​
Legacy: complex word, ambiguous, possibly controversial.
From the outset, legacy is something that should not be understood only in the material sense, of concrete works. There is also a legacy in the immaterial sense.
We must ask ourselves: To what extent the total opacity of the decision-making process of the games is not part of our legacy?
The urgency in the process of urban transformation for the Games, did it not reinforce Rio’s citizens difficulty to collectively coordinate, their historically small ability to mobilize for urban solutions?
In what measure is this reiteration of our difficulty to self-reflect on the city not part of the legacy of the Games?

Unforeseen Legacy
​
Although it has always existed, the Olympic legacy has not always been positive. On the contrary, it has often boiled down to idle structures in financially ruined cities.
Object of this competition, the 6,784 unused precast concrete pieces are an emblem of the unforeseen legacy of the Rio2016 Olympic Games. They represent the leftover portion, the margin of error of this transformation process, the waste, the erratic urban planning.
RECONVEXO Competition summons upon a reflection on the real needs of the city of Rio de Janeiro, through the elaboration of imaginative, critical and poetic proposals for the use of these pieces.

The staves
​
Structural parts for the tunnel installed by Tunnel Boring Machine (TBM), popularly known as “Big Armadillo”, each set of 8 staves composes a ring of tunnel structure.

Each ring has 4 types of pieces:
​
– (5x) “A” pieces of regular external size 0,4m x 1,84m x 4,77m make up the main part of the ring.
– (1x) part “B” and (1x) part “C”, both with external trapezoidal shape 0,4m x 1,84m x 5,02m(variable), in order to facilitate the fitting of the last piece – “K”.
– (1x) “K” piece with external trapezoidal shape 0,4m x 1,84m x 1,58m (variable) which functions as the ring closing wedge.
Once coupled the pieces form a ring with 11,13m of radius.
The manufacturing process used metal molds supplied by the manufacturer of TBM (Herrenknecht Tunneling Systems, Germany) filled with fiber reinforced concrete, subjected to thermal steam cure for 6 hours and stockpiled for at least 28 days.
From the stockpiling the staves are led to the entrance well of the tunnel, where they are installed by the TBM itself.

SELECTION CRITERIA
​
Proposals should:
– Interpret the meaning of the Olympic legacy. In other words, they should question how punctual public investment can improve the city and the ways in which its inhabitants can relate to it
– Promote the enhancement of urban space and greater equity in the population’s access to it
– Use as much as possible of the available material
– Use the staves within the municipality of Rio de Janeiro Comments
– There are no restrictions of any kind on how the parts will be used
– Use the virtual models of the staves made available in attached annex to this edict
– The accuracy of these models is approximate, however, in order to match the proposals, the models cannot be changed, under penalty of disqualification
– Despite being a competition of ideas, and as such not being tied to technical feasibility, the proposals are expected to be based on structural common sense

PARTICIPANTS
​
WHO CAN PARTICIPATE IN THE COMPETITION:
University students or teams of students in the fields of Architecture, Arts, Engineering, Design, or any other courses that are interested in the subject.
Newly graduated students with less than one (1) year of graduation.
WHO CAN NOT PARTICIPATE IN THE COMPETITION:
Students who work, are professionally associated or have direct family ties with the contest organizers or jury members.

Each registered team can send only one proposal.
In case of participation by teams, the Team Member Responsible for Registration (Registrant) must be identified in the Identification Form.
There is no limit on the number of team members.
Participants are not allowed to integrate more than one team.

The registration fee for each team in the contest is R$ 150.00.
Payment of the registration fee will be made by credit card (Visa or Mastercard) through the following link: http://sgu.net.br/event/RECONVEXO_PUC.
To enter the payment page you need to create a “login”. Once in the contest page you must proceed to “registration”.
Payment must be made by the the Registrant, as designated in the Identification Form.
The Identification Form must be sent to: reconvexo.puc@gmail.com

Note: A minimum number of 80 teams are required to cover organization costs. If the number of registrations does not reach this baseline, the registration fee will be refunded to the contestants, bank fees duly deducted.

QUESTIONS
​
Questions regarding this announcement must be sent to: reconvexo.puc@gmail.com.
All questions will be answered by April 07th, 2017.

SELECTION
​
The works will be analyzed by the Jury anonymously, using only the identification number.
According to the opinion of the Jury, appropriate Honorable Mentions will be selected.
The Jury is sovereign and its decisions cannot be appealed.

PRESENTATION
​
The works must be sent in digital format to the organization via email to: reconvexo.puc@gmail.com, until midnight of April 21st, 2017.
The reception of the material will be confirmed by the organization via email.
The graphic material must contain the proposal duly identified through the registration number.
Proposals must be submitted in up to two boards in A1 format to be printed by the organization for Jury evaluation.
– Each A1 board should be sent in a separate PDF file with a maximum of 5 megabytes.
– Along with the graphic material the Presentation Form should be sent. The information contained in this form will be used as basic Press Release material or as publishing material.
– Teams which proposal may be identified by any means other than the Registration Number will be eliminated from the selection of the jury. 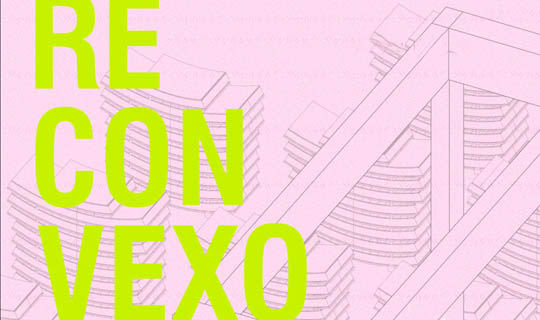