The New York State Canal System is one of the most transformative public works projects in American history. The entire system was listed as a National Historic District on the National Register of Historic Places in 2014 and designated as a National Historic Landmark in 2017 for its role in shaping the American economy and urban development. Despite its past success, vessel traffic on the Canal System has steadily declined over the last century. Deindustrialization and competition from rail, pipelines, roadways and the St. Lawrence Seaway, put the Canals at a disadvantage in transporting freight. Pleasure boating activity levels have likewise fallen and are today only half what they once were. In contrast to the decreasing maritime activity on the Canal System, recreational uses along it – from hiking and bicycling in spring, summer, and fall to cross-country skiing and ice fishing in winter – have grown in popularity. The 750-mile Empire State Trail, which will run from New York City to Canada and from Albany to Buffalo, is expected to be completed in 2020. It will further enhance opportunities for recreation along portions of the Canal System. To date, however, much of the Canal System’s potential to stimulate tourism and economic activity in the communities along its corridor remains untapped.

To address the challenges and opportunities facing the Canal System, the Competition seeks visionary ideas for physical infrastructure projects as well as programming initiatives that promote:
• the Canal System as a tourist destination and recreational asset
• sustainable economic development along the canals and beyond
• the heritage and historic values of the Canal System
• the long-term financial sustainability of the Canal System

The two-stage Competition is open to individuals, businesses, non-profits and municipalities. Respondents are encouraged to form multidisciplinary teams. These could include, for example, urban designers and architects, planning and community specialists, hydrologists, infrastructure engineers, artists and curators, development economists, real estate developers, local officials and financing partners. Submissions from both domestic and international teams are welcome. 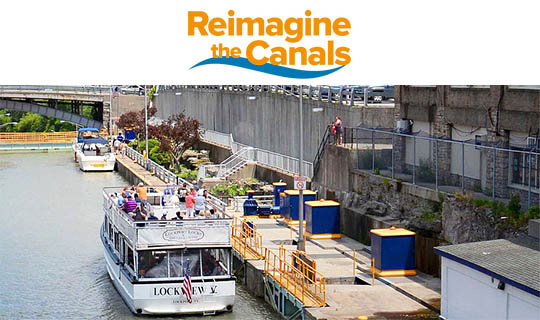