Park Avenue, one of the world’s premiere thoroughfares, is traditionally known for its tall buildings that are home to Fortune 500 companies. The medians of Park Avenue, or the “centerlines,” are traditionally characterized by plantings and periodic sculpture installations. Park Avenue medians represent a traditional element of New York City but also provide an opportunity for reinvention. Other areas of New York City, such as the High Line, have successfully transformed into an exciting destination for city dwellers and visitors alike.

Fisher Brothers is pleased to sponsor a $30,000 privately-funded design competition using the Park Avenue medians (between 46th – 57th Streets) as a canvas for collecting visionary design proposals with the potential to enliven Park Avenue’s commercial district. The goal of this competition is to foster creativity and challenge participants to think outside the box; to propose exciting ideas that have never been considered possible for the medians; and to reimagine the existing urban landscape. We want ideas that bring Park Avenue into the 21st century.

Fisher Brothers urges competition participants to think “beyond the centerline,” using the medians as a blank canvas for creative ideas to engage the community and reimagine Park Avenue. Designs should be considered a seed that when planted will completely change the dynamic of the Park Avenue centerline and the Midtown East neighborhood. We encourage you to conceptualize this project in any way that inspires you and the parameters remain broad to allow for maximum creativity.

Up to 10 competitors selected by an esteemed jury will be invited to publicly display their designs at Park Avenue Plaza, a building prominently located on Park Avenue and 52nd Street, in February 2018. The jury will select a $25,000 grand prize winner and a popular vote will determine a $5,000 prize winner.

All competition information and key dates are below. We hope you take the opportunity to express your creativity and participate in this competition. If you are interested in participating, please fill out the entry form at ENTRY FORM by December 15, 2017. 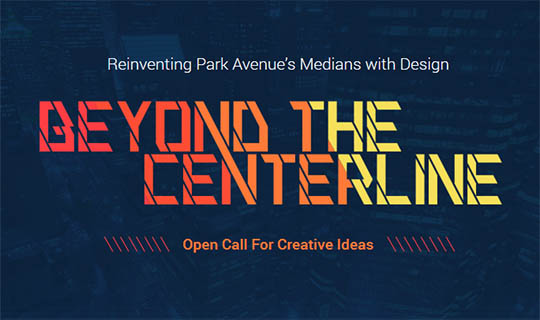