Water stretches, existing buildings, bare lands, engineering works…The call for projects “Reinventing the Seine” consists in submitting sites along the Axe Seine to occupy, animate, rent or purchase to implement innovative projects. This multi-site approach is aimed at revealing and giving life to the Axe Seine : the local authorities and ports of the territory are laying down a challenge for innovators worldwide… to invent new ways of living, working and travelling on and along the water, making use of the various sites. The river and innovation will thus play their part in inventing the great metropolis of the 21st century, stretching from Paris to Rouen and Le Havre. Reinventing news possibilities of living on the water and along the banks of the Seine.

The goal of the “Reinventing the Seine” innovative call for proposals is to select projects with ties to the Seine and its canals and then carry them out in the short term, throughout the area of the Seine Axis and its major cities of Paris, Rouen and Le Havre. These projects will be developed on the identified sites within the framework of this call for proposals.

The Paris/Rouen/Le Havre Seine Axis is a vital territory for the attractiveness of the metropolitan area and its quality of life. Access to the sea is one of the key conditions to be open to the world and rank among the major cities of the 21st century. From Greater Paris to Le Havre, the Seine traces a line of undeniable wealth, there for all of us to rediscover and reclaim for our common good.
The river’s important role in shaping our territory, as demonstrated in the studies carried out by Antoine Grumbach, must be highlighted through large-scale projects along the whole length of the river.
The “Reinventing the Seine” call for proposals creates the framework that is necessary to make this ambition a reality and provide multi-disciplinary teams with the tools they will need.

In the cities along the Seine Axis, as is the case for all the world’s major cities, citizens are taking back ownership of their river and canals by reinventing their uses. The river, more than merely representing a way to get from point A to point B, can become a living space, a place for urban walks, leisure activities, economic activity and housing, while maintaining its role as a biological corridor.
A group of partners along the Seine Axis have come together to issue a challenge to teams around the world to transform some forty sites into showcases for new ways of living between land and water.
On the water, above it and along its banks, cutting-edge projects will emerge and take shape, embodying the many possibilities of living in harmony with the river. 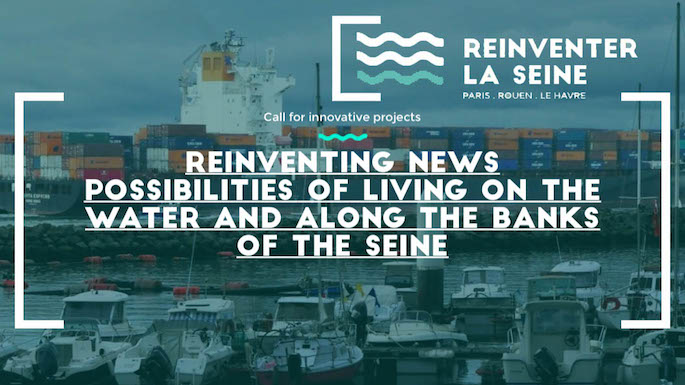