In partnership with the musée des Beaux-Arts de Lyon, the network Architecture, Patrimoine et Création, of the ministry of Culture, launches an international ideas contest of architecture around an extension of the musée des Beaux-Arts of Lyon. RESTART CONTEST has for goal to stimulate research and experimentation ans to also encourage new synergies between students and young professionals.

It encourages reflection on restructuring the museum and/or a contemporary graft in a former royal benedictine abbaye – whose foundation dates back to the seventh century and the bulk of the building to the reign of Louis XIV – transformed into a museum in the early nineteenth century. Partially classified as a historic monument, the building underwent a major renovation and extension project carried between 1990 and 1998 by Jean-Philippe Dubois and Jean-Michel Wilmotte, who raised it among the leading European museums.

The musée des Beaux-Art of Lyon is located in the heart of the historic center of Lyon – a UNESCO World Heritage Site in 1998 – in the southern part of the Place des Terrreaux, refitted in 1994 by Christian Brevet and Daniel Buren, near the national Opéra of Lyon, rehabilitated by Jean Nouvel and Emmanuel Blamont between 1989 and 1993.

Twenty years after its ambitious restoration, the museum rethinks its uses and tis reflection on its spaces, its link with city and its urban environnement.

Despite the size of the building forming the quadrangle of the old abbey – 14,450m ² including 8,840m ² for only the exhibition areas – the musée des Beaux-Arts of Lyon is today is strongly contained in the presentation of its collection, in particular for the works of the modern period.

The development of an ambitious program of temporary exhibitions recent years, coupled with and unprecedented enrichment of permanent collections, has led to the rethinking of the museum areas in view of a redeployment.

The creation of a Pole of Art Museums in the City of Lyon (2018), which now unites it with the Museum of Contemporary Art in Lyon (Renzo Piano, architect), reinforces the opportunity for this reflection.

The international REST-ART CONTEST architectural ideas contest is open to all students from schools and faculties of architecture from the 4th year of architecture, as well as to architects who have graduated since 2013. It closes November 1, 2019.

Three prizes will be awarded to the most relevant proposals. Mentions may be awarded by the jury. The winning projects and mentioned will be the subjects of a wide communication around the contest.

The winning projects will be subject of a temporary exhibition at the musée des Beaux-Arts of Lyon.

Candidates are invited to reflect on the artificial lighting of a part of the Musée des beaux-arts de Lyon, both on the interior and exterior façades and on a choice of rooms (exhibition rooms, baroque refectory, staircases). This proposal must be integrated into an overall project. This prize will be awarded by Renaud Lièvre, directeur iGuzzini France. 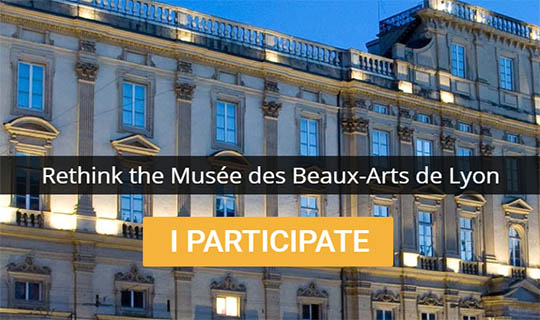