On Sept 8th, 2022 we held a ceremony at Sursock Museum in Beirut, Lebanon, to announce the winners of The Beirut Port competition as part of the 7th annual Inspireli Awards.

Beirut Port competition is 4th design competition as part of the Inspireli Awards, the largest international architecture competition for students regardless of their economical, ethical or social background.

Almost 2 years ago, Inspireli offered help to Beirut after the devastating explosion in Aug 4, 2020, by organizing this competition. Our help was accepted and we became the official organizer of a competition for the city of Beirut.

Inspireli’s goal was to show that Beirut is not alone in these times of crisis. The competition was organized free of charge, both for the students to apply and for the Municipality of Beirut as a receiver of the designs, too.

For a year, many universities and students from 43 countries around the world worked on the project in their University studios and it resulted in 249 projects submitted by 579 participants. Winning projects are offered to the Municipality of Beirut with the aim to help the first steps or renewal of the destroyed port and bringing ideas on how to integrate more public spaces into the port area.

The two round voting system with more than 800 jurors selected first the 40 finalists – see the Finalist gallery here – out of which then the best 4 project and 4 honorary mentions were awarded in Beirut last week.

Ruben Epping (Germany) from Lund University Sweden, and the Project “Port of Beirut: Public re-claimation of the waterfront“. 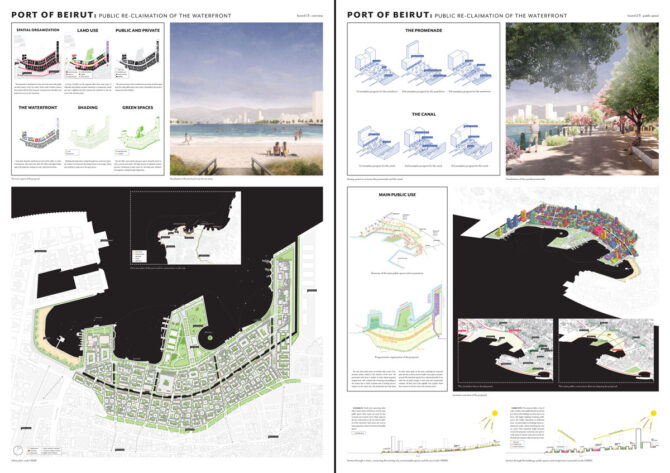 After the devastating explosion at the port in August 2020, the city of Beirut was left with immense humanitarian and material damage. Most of the port and its surroundings have been destroyed and are waiting for recovery and redevelopment since.
The catastrophe started a discussion about the future of the port and offered the opportunity of claiming the land closest to the city center for urban development.
To achieve a well accepted and sustainable new district, respecting the location as a site for memorial and connecting it to the existing neighborhoods as well as to the city center is of high importance. At the same time the focus should lay on the needs of the citizens of present and future Beirut.
The proposal presents a possible outcome of a development that could be partly accompanied and supervised by representatives of the public. Especially the development of the memorial site to a park should be based on a public participation process. By involving the citizens, the acceptance of the new district can be increased and the emotional relevance of the site respected.

The subject of the design is a residential high-rise building in the port of Beirut. The design is based on an architectural and urban study, which was prepared as part of a undergraduate project. It is a revitalization of the area destroyed by the 2020 explosion. The explosion in Beirut, the capital of Lebanon, occurred on August 4, 2020, when large amounts of ammonium nitrate stored in the port exploded, causing at least 218 deaths, 7,000 injuries, property damage of $ 15 billion and about 300,000 people found themselves homeless. The cargo of 2,750 tonnes of the substance had been stored in a warehouse without proper security measures for the previous six years after it was seized by the Lebanese authorities of an abandoned ship. The explosion was preceded by a fire in the same warehouse, but since September 2021, the exact cause of the detonation has still been under investigation. Currently, the area is unused, the debris has not been removed and the port is waiting for its new use. One of the main issues in the urban design was the interruption of the height difference between the port and old Beirut. At this point, there is now a very unfavorable highway, which by its existence forms a barrier between the city and the coast. Old Beirut is currently located 12-15 meters higher than the port itself. We solved this problem by creating individual platforms within individual blocks. These create a gradual, easily crossable terrain element, which makes it easy to overcome the height difference. Above the port, among the skyscrapers, there is also a pedestrian “cobweb”, from which one observes the entire city and approaches the height of the surrounding buildings. It is also within easy walking distance of the old Beirut to the sea. The subject of the diploma thesis was one of the blocks in the port, containing 3 residential skyscrapers. Within the diploma thesis, only one of them was elaborated in detail – containing 54 above-ground floors and 2 underground floors. We will find in it an extensive concierge service for residents of luxury apartments, penthouses on the highest floors, fitness and wellness, cafe, barbershop, etc. It is a high-rise building with a reinforced concrete core, superstructure and internal reinforced concrete skeleton. A second flared mantle was designed over the entire building, which creates a more favorable indoor microclimate for the building’s users, pleasant winds and also increases the architectural attractiveness of the entire building. 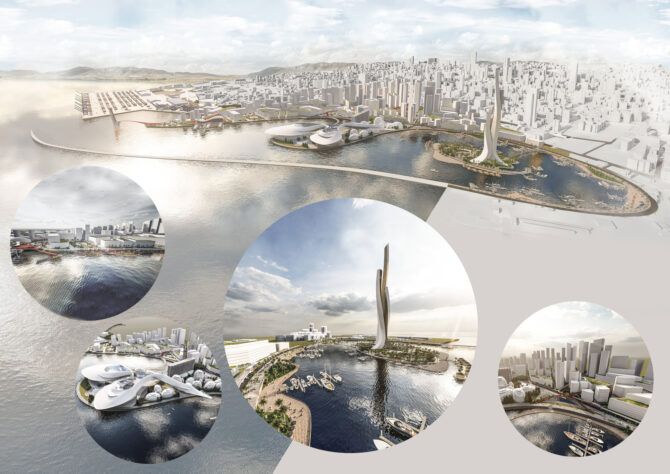 “Beirut Port: An Urban Life Generator”, is a project that aims not only to regain the functioning of the industrial part of the port, but also to transform it into an international landmark through different strategies. The design approach began by studying the visual permeability, the public and industrial ratios in the port, connections with nonfunctional landmarks, maritime circulation and creation of new water channels within the project. Some strategies include the creation of a main axis from Electricite Du Liban, through a tunnel under Charles Helou highway directly towards the silos. Soft circulations are incorporated at different spots, one facing the Mar Mkhael Train Station towards Karantina, and one from Mar Mikhael through Charles Helou Bus Station towards the port. All these maintain continuity in the transition and stitching of the now separated regions Karantina, Mar Mikhael, Gemmayze, and Beirut.
The project intends to create a public zone in the port (1st & 2nd queue), through limiting boat traffic and incorporating visitor attraction functions like an opera house and a cultural center, that maintain a dialogue with Martyrs’ Square and serve as a principal entrance from Beirut. The silos are transformed into a memorial linking back to the tragedy of the explosion. Others include a maritime museum, a modern arts museum, a convention center and a commercial center. Facing Charles Helou Bus Station is a mixed-use residential area with a souks street at the very end line near the sea. Taking into account the strategic location of the port and the train station’s historical location near the port, we created a metro station on the 3rd queue as main attraction point. Hence, people coming from the cruise terminal have the possibility to reach out to any location in the country and vise versa. This generates further economic gain and easy access to the port.
The industrial zone (current cranes zone) is restudied and incorporates high tech systems such as high bay storage systems, drone controls, automated vehicles, etc.. . Spaces are studied to serve with maximum efficiency, solving the problem of wasted spaces in the port. The link with Karantina region is also rehabilitated by transforming the region into a economic district, and building an urban balcony that extends along the peripheries.
Finally, our project aims to give a new significance to the Beirut port, through turning it into a main component for the regeneration of Beirut urban life.

Chee Kin Tan and Jennifer Wei Zhang (Malaysia and China) from Tsinghua University, with the Project “The Beirut Lines“

The Beirut Lines envisions a bold elevated public hub, connecting four urban axes of the city and bridging across the existing urban fabric from the northern coastline towards the Green Line – an intervention designed to create a new urban culture, inspiring wider regeneration and synthesis on an urban and social level. For many years, the Beirut port represented more of a barrier than a connection between the city’s communities and its coast. The reconstruction of the port area opens up the opportunity for a pivotal civic gesture that will both catalyse the area and fill the void of active public spaces in the city.

Urban Catalyst – The Beirut Lines envisions a bold elevated public hub, connecting four urban axes of the city and bridging across the existing urban fabric from the northern coastline towards the Green Line – an intervention designed to create a new urban culture, inspiring wider regeneration and synthesis on an urban and social level. For many years, the Beirut port represented more of a barrier than a connection between the city’s communities and its coast. The reconstruction of the port area opens up the opportunity for a pivotal civic gesture that will both catalyse the area and fill the void of active public spaces in the city.

A Public Hub – Consisting of a series of (semi) open and multi-levelled courtyard platforms, the mixed-use public hub creates a rich spatial experience that inspires spontaneous moments and interactions between interior and exterior spaces; contained within a singular rectilinear form. Diverse programmes aim to attract both locals and tourists, becoming a starting point for dialogue between different social groups. Central to the scheme is the permeability of the structure and versatility of space, enabling the freedom to adapt to the public’s needs. While proposing tentative programmes, the architecture does not impose a strict functional narrative on the users, but instead remains polyvalent by providing a framework that allows the programme to evolve with the city and its inhabitants.

Elevated Connectivity – While culturally and morphologically diverse, the compromised mobility network and inward-focused developments of the city have exacerbated the disconnection between the different communities and neighbourhoods in Beirut. Converging towards the port site, The Beirut Lines becomes the connective element between the active coastline and historic Green Line, interwoven into the existing network of organised spaces in-between. By elevating the structure, The Beirut Lines liberates the ground plane, allowing the brownfield site to recover through phytoremediation using a sea of sunflowers, and creating better connectivity between the city and its seafront.

A Symbol of Collective Hope – The revised port zone is located at the east end of the plot, while the brownfield remediation site opens up different possibilities for the area. We imagine a public recreational landscape at the central seafront, framed by an urban expansion zone which enables various cultural and commercial uses to promote greater social integration and economic viability. In addition to the pragmatic purpose of the brownfield remediation site, it encapsulates the resilience and strength of Beirut and its people. The memory of the blast and its effects can be observed in two dimensions: the void and the ruins. The remains of the Silos structure (the ruins) are preserved, with wire mesh frames tracing the missing pieces, and stand amidst the sunflower field (the void) as a beacon of hope. Passing through the elevated public hub, users are taken on a journey, following the gradual recovery process of the site. The Beirut Lines extends the historic Green Line into the remains of the cardinal Silos structure, linking the memories of the city.

Around 20 people from different countries travelled to receive their awards and made a beautiful event at the Sursock Museum in Beirut – you can see the photo gallery of Beirut Port competition winner’s announcement ceremony here.