The call for ideas NAUTICAL MICRO MUSEUM was launched on February 2022 by YAC – Young Architects Competitions – in collaboration with the Baglietto SPA  to design an itinerant exhibition space to host the rich and unique nautical collection of Baglietto, the oldest shipyard in Europe.

With its nearly 170-year glorious history of heroism, science, craftsmanship and innovation,  this shipyard has been fitting out the most desirable and renowned ships in the world. Today, Baglietto aims at showing such history to a heterogeneous public through a “travelling micro-museum”. Like a ship, this moving architecture will land on various destinations to tell its story to ship owners, visitors, and enthusiasts.

The challenge of Nautical Micro Museum competition was to honor the history of one of the most prominent shipyards in the world telling once again stories of uncontaminated islands, legendary ships, storms, and adventures in the never-ending and everlasting epic of the exploration means par excellence: the boat.

Hundreds of contestants from all over the world took this design challenge up and submitted valuable concept ideas to an internationally-renowned jury panel featuring, among the others, Melodie Leung from Zaha Hadid Architects, Lars Almgren from Dorte Mandrup,  Ryohei Koike from BIG – Bjarke Ingels Group, Francesco Paszkowski, James Whitaker.

Seven top-ranking projects have been rewarded with  a total cash prize of  € 15,000.

In particular, the French team Zecler Studio made of  Boris Hilderal  ranked first winning a cash prize of € 8.000 + the actual construction of his concept idea. 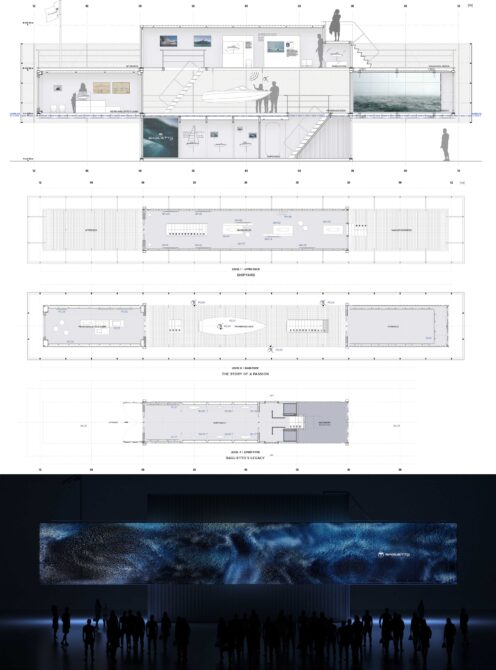 On the horizon. On the water. Beyond the technical prowess, it is indeed the pleasure offered by naval architecture that drives us for this project. Our proposal draws from the moving landscapes, the unexpected, the legacy and the fragments of intimate stories of a boat trip. The visitor wanders, from bottom to top, in a landscape in progressive transformation, from the most immersive to the most open. Thus, the collection deploys on three levels following to alternating sequences. Sometimes indoors, sometimes in the open, connected by bridges and belvederes. Space is perceived in motion. The whole project offers refined atmospheres, simple forms, favoring the play of light, points of view, perspectives, refinement and the softness of natural materials. Emotion and curiosity, awakening and understanding are also at the heart of our approach. Complemented by the immersive force of the audiovisual installations, the scenography establishes a constant dialogue with a ‘here’ and an ‘elsewhere’. 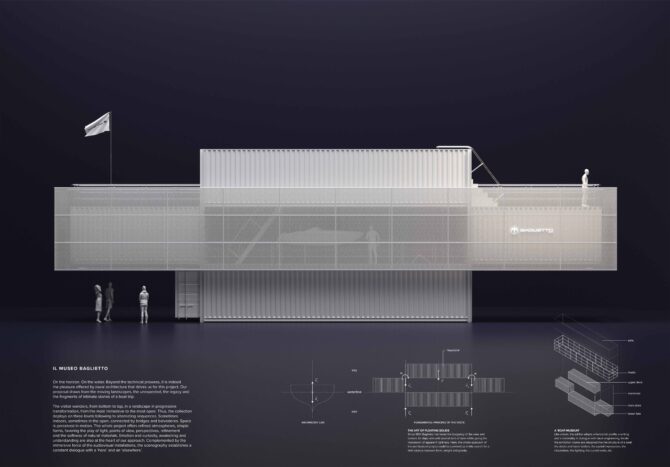 The second prize of € 4,000 was awarded to the Irish  team AI atelier  featuring Andrada Ispas, whose project took inspiration from Baglietto’s passion and innovation in the nautical field. 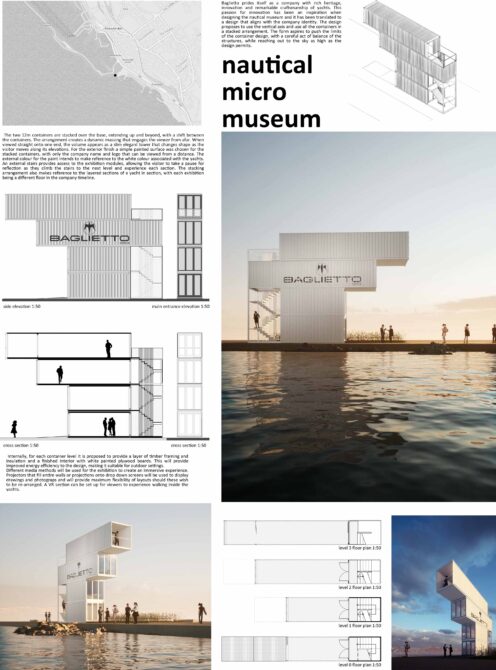 The design proposes to use the vertical axis and use the containers in  a stacked arrangement. The form aspires to push the limits of the container design, with a careful act of balance of the structures, while reaching out to the sky as high as the design permits. The arrangement creates a dynamic massing that engages the viewer from afar. When viewed straight onto one end, the volume appears as a slim elegant tower that changes shape as the visitor moves along its elevations.. For the exterior a simple painted surface was chosen for the stacked containers, with only the company name and logo that can be viewed from a distance. The external colour for the paint intends to make reference to the white colour associated with the yachts. An external stairs provides access to the exhibition modules, allowing the visitor to take a pause for reflection as they climb the stairs to the next level and experience each section. The stacking arrangement also makes reference to the layered sections of a yacht in a section, with each exhibition being a different floor in the company timeline. 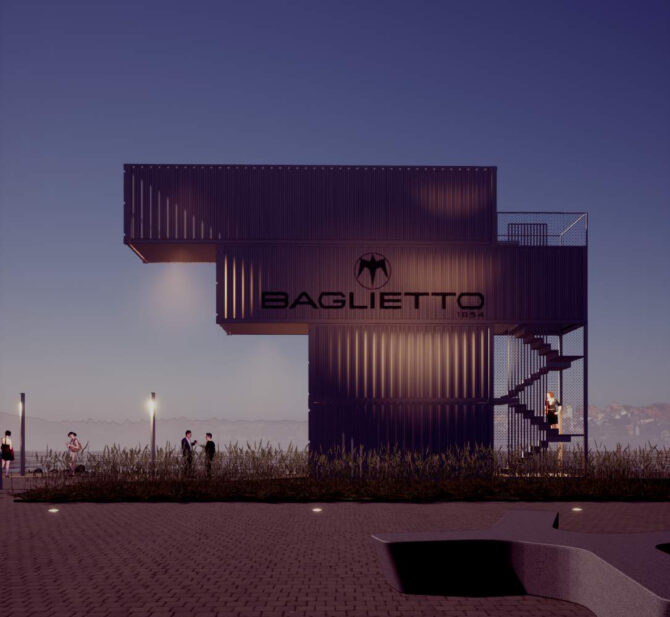 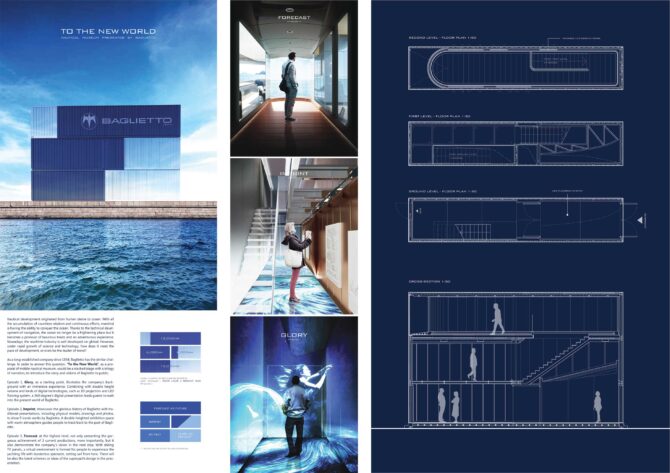 Their  proposal develops  a  trilogy of narration to introduce the story and visions of Baglietto to public: Episode 1, Glory, as a starting point, illustrates the company’s background with an immersive experience. Combining with double height volume and kinds of digital technologies, such as 3D projection and LED flooring system, a 360 degree’s digital presentation leads guests to walk into the present world of Baglietto. Episode 2, Imprint, showcases the glorious history of Baglietto with traditional presentations, including physical models, drawings and photos, to show 5 iconic works by Baglietto. A double-heighted exhibition space with warm atmosphere guides people to track back to the past of Baglietto. Episode 3, Forecast, at the highest level, not only presenting the gorgeous achievement of 3 current productions, more importantly, but it also demonstrate the company’s vision in the next step. With sliding TV panels, a virtual environment is formed for people to experience the yachting life with borderless spectacle, setting sail from here. There will be also the latest schemes or ideas of the superyacht design in the presentation. 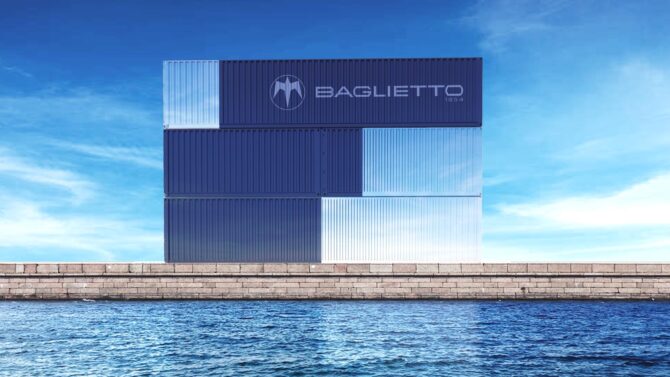 Two Gold Mentions rewarded with € 500 each went to teams JYQ TEAM and Lighthouse made by students only in order to further foster, as a wish of Baglietto, the talent of young, brilliant designers.

Qingyu Xue, Jiarui Zhang and Yuqiao Sun are the members of the team JYQ TEAM from China: The project uses four containers to provide visitors with a universal exhibition experience space for Baglietto. The containers are tilted to create interesting gray space by using the gaps between the containers. Visitors go up and down the stairs as if they were going through a gangway to each deck. The project combines traditional exhibition methods with VR experience, driving simulation. The combination of audio and visual exhibition improves the participation of the visitors and the fun of the exhibition. 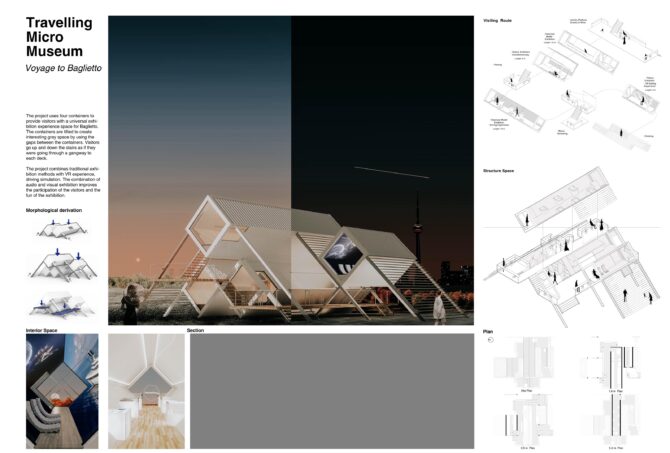 Sunbin Jeong, Jae hoon Lee, Seung Uk Byeon, Minjeong Jang, So Yeon Kim made the team Lighthouse from South Korea. Their proposal lays on the the idea to create a space where people could indirectly feel like they were on a yacht on the sea, not just by watching the exhibition hall and experiencing it instead of directly riding on a yacht. As a result of analyzing the angle of the bow of the Baglietto yacht, it was found that most of the boat reached 60 degrees, so the shape was changed by setting the standard for the contain­er mass of 60 degrees. For the sense of openness, the 60-degree mass on the first floor was rotated in an obtuse angle to create a community space where people gathered through the open space between the mass and the mass.  In addition, when looking at the facade by tilting each mass on the second floor by 15 degrees and 30 degrees, the container mass was expressed as a design reminiscent of the ship’s head. 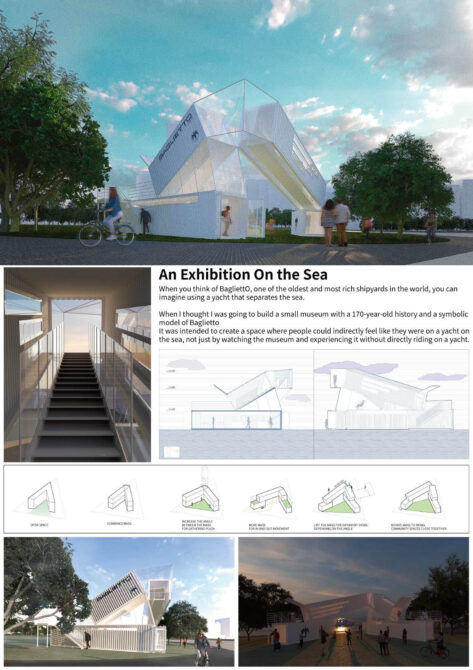 40 additional high-quality and valuable projects (10 Honorable Mentions and 30 Finalist Mentions) follow-up in the ranking of this exceptional call for ideas.

Vist YAC’s website to have a look to all the awarded projects: www.youngarchitectscompetitions.com