TerraViva announces the results of “The Cuban Square” competition
TerraViva has officially released the complete list of awarded projects of the design contest “The Cuban Square”.
The goal of this competition is to explore the potentialities of Plaza de la Revolución (Havana, Cuba), in order to come up with a design proposal capable of giving it a new life.

How could it be transformed into a place for community life and social interaction? What kind of intervention might turn the square into a livelier area, accessible and functional for both local dwellers and international tourists? The Cuban Square aims at reinterpreting a space full of history and cultural value through innovative and original projects.
TerraViva thanks all the designers for participating in “The Cuban Square” competition! 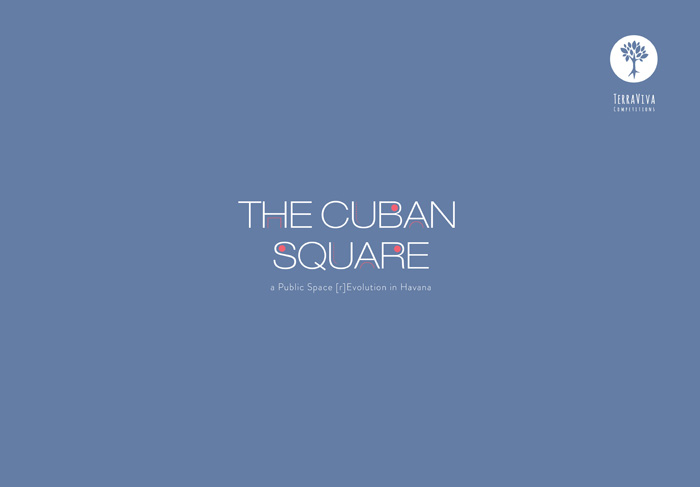 Organized by TerraViva, the competition was open to students, architects, designers, artists, makers, activists and anyone interested in the transformation of the contemporary urban space. 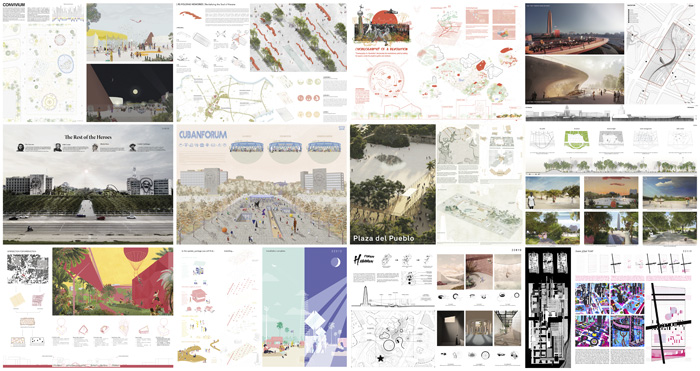 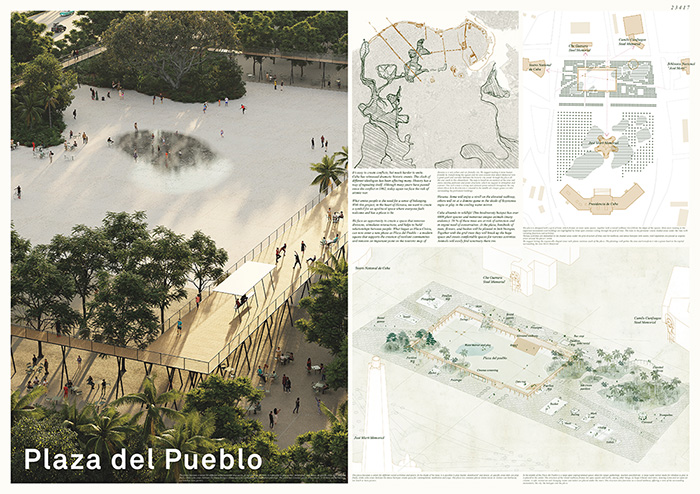 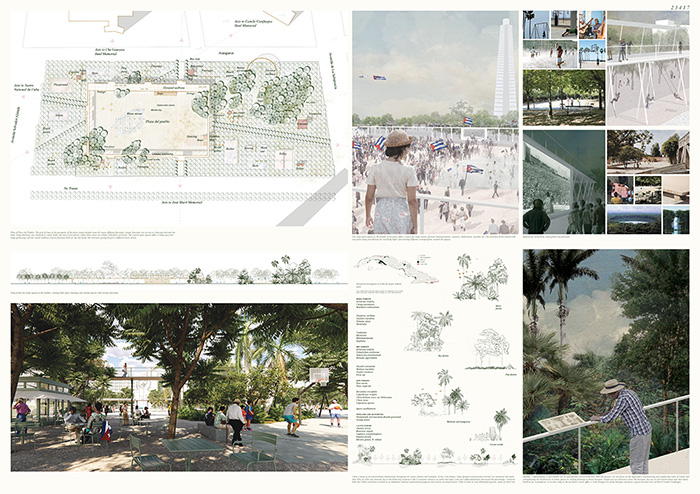 It’s easy to create conflicts, but much harder to unite. Cuba has witnessed dramatic historic events. The clash of different ideologies has been affecting many. History has a way of repeating itself. Although many years have passed since the conflict in 1962, today again we face the risk of atomic war.
What unites people is the need for a sense of belonging. With this project, in the heart of Havana, we want to create a symbol for an apolitical space where everyone feels welcome and has a place to be.
We face an opportunity to create a space that removes divisions, stimulates interactions, and helps to build relationships between people. What began as Plaza Civica, can now enter a new phase as Plaza del Pueblo – a modern square that supports the creation of resilient communities and remains an important point on the touristic map of Havana. Some will enjoy a stroll on the elevated walkway, others will sit at a domino game in the shade of Roystonea regia or play in the cooling water mirror.
Cuba abounds in wildlife! This biodiversity hotspot has over 6000 plant species and numerous unique animals (many endemic). 50 % of these trees are at risk of extinction and in urgent need of conservation. At the plaza, hundreds of trees, flowers, and bushes will be planted in lush biotopes. Together with the grid trees they will break up the huge space and create comfortable spaces for various activities. Animals will easily find sanctuary there too. 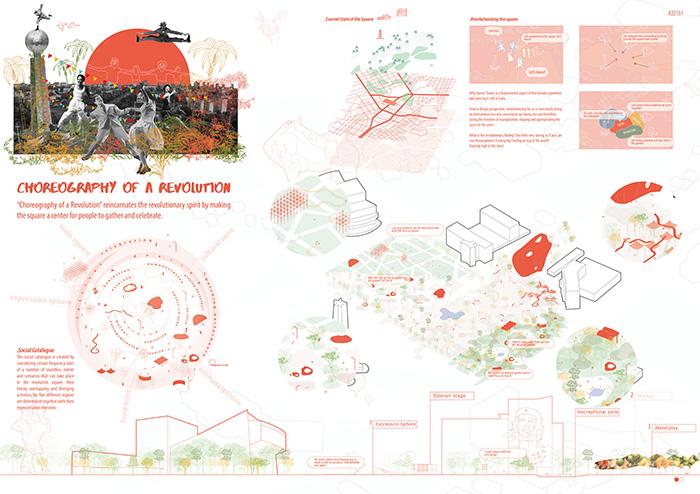 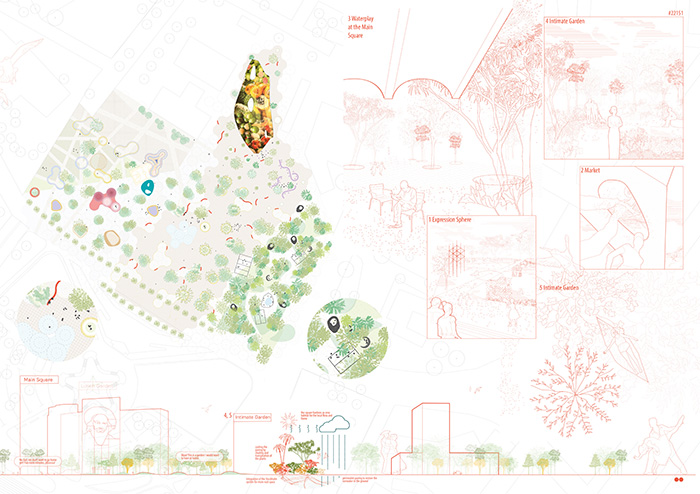 The name Plaza de la Revolución evokes an active and influential public space where a lot has been happening throughout its history. An image that does not match with the current state of the square: a large emptiness in a very formal setting with two murals hinting at a sense that is hardly there anymore.
Our design proposal consists of two main interventions:
1. Breaking down the space into a scale proportionate to humans, yet flexible enough to merge together and host big gatherings. This has resulted in 5 big zones:
a. Food Zone including the market and the lunch garden;
b. Intimate Garden for a more quiet time in an intense greenery;
c. Main Square to revolve the sense of togetherness;
d. Expression Sphere with the space in front of the Che Guevara mural and the national theater for recreational activities and artistic performances and installation and
e. Che from Cuba!
2. The main axis, driven from the street in the north of the square, intentionally and slightly shifts the attention away from the landmark to balance out the formality of the square.
Cuba is a place of dance and revolution! So why not “Choreography of a revolution” to be the backbone of the new design for the square?
Salsa, fun and popular like a market,
Mambo, very Cuban like Che!
Son, precise and energetic like a well designed public square,
Rumba, informal and spontaneous like an act of self-expression,
Danzon, elegant and delicate, like flirting in an intimate garden. 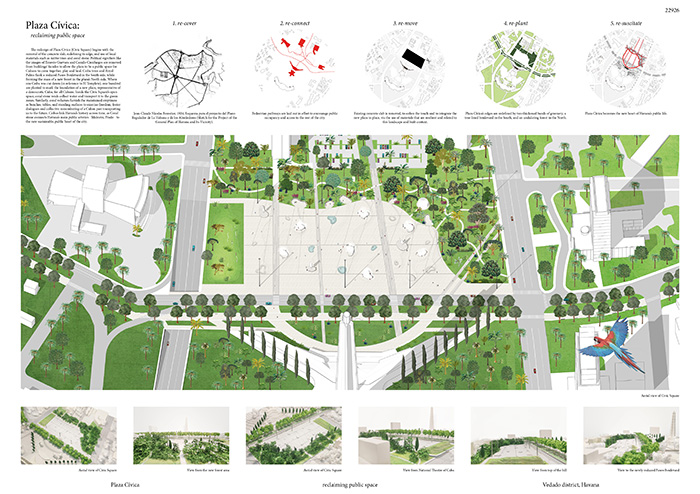 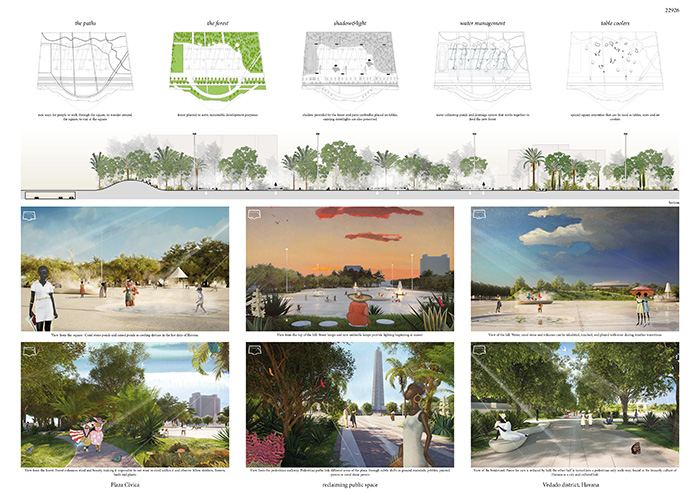 The redesign of Plaza Cívica (Civic Square) begins with the removal of the concrete slab, redefining its edge, and use of local materials such as native trees and coral stone. Political signifiers like the images of Ernesto Guevara and Camilo Cienfuegos are removed from buildings’ facades to allow the plaza to be a public space for Cubans to come together, play and heal. Ceiba trees and Royal Palms flank a reduced Paseo Boulevard in the South side, while forming the mass of a new forest in the plaza’s North side. Where one Ceiba was cut down (in reference to El Templete), one hundred are planted to mark the foundation of a new place, representative of a democratic Cuba, for all Cubans. Inside the Civic Square’s open space, coral stone voids collect water and transport it to the green zones. Similarly, coral volumes furnish the maintained emptiness as benches, tables, and standing surfaces to exercise freedom, foster dialogues and collective remembering of a Cuban past transporting us to the future. Ceibas link Havana’s history across time, as Coral stone connects Havana’s main public arteries – Malecón, Prado – to the new sustainable, public heart of the city. 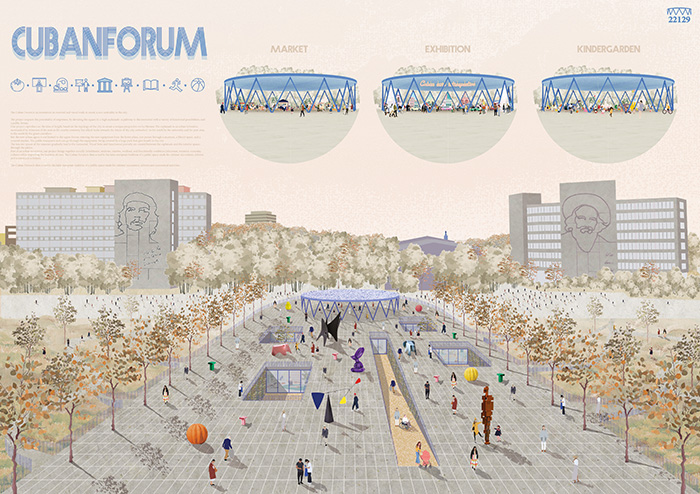 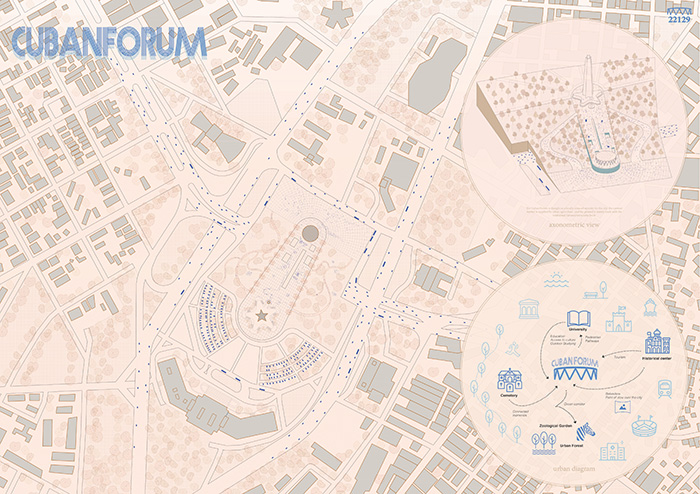 The Cuban Forum is an investment in material and visual voids to create a new centrality in the city.
The project respects the potentiality of emptiness, by elevating the square in a high esplanade: a pathway to the memorial with a variety of functional possibilities, and a public forum.
Our project capitalizes on the idea of height, based on the topology of the city, to create a unique perspective on La Havana. The esplanade is an urban belvedere, surrounded by witnesses of the past as the nearby cemetery, but which looks towards the future of the city, embodied: to the north by the university and the port area ; to the south by the green corridors.
But the new urban agora is not limited to the upper forum: entering the new equipment from the lower plaza, one passes through a museum, a library space, and a covered market. The public transports and cars go through the equipment, being covered by a huge park that give breath to the city. The interior spaces of the museum gradually lead to the memorial. Visual links and functional porosity are created between the esplanade and the interior spaces through the patios.
Part of an urban ecosystem, our project brings together socially (inhabitants, students, tourists, workers) and functionally combines (education, memory, economy, culture) while respecting the freedom of uses. The Cuban Forum is then a nod to the latin-european tradition of a public space made for citizens’ encounters, debates and economical activities. 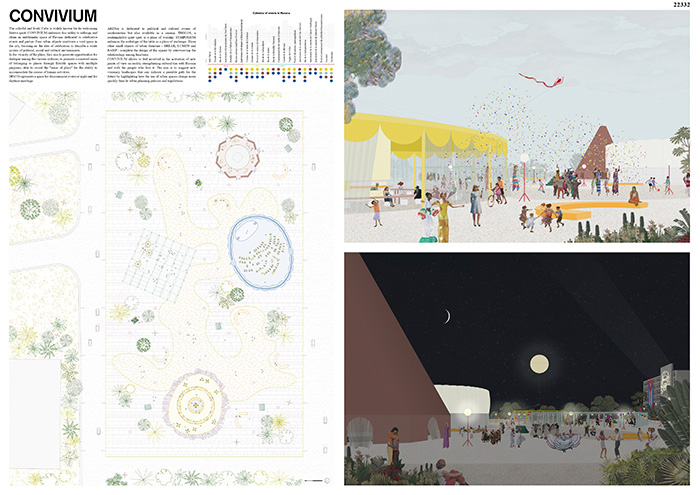 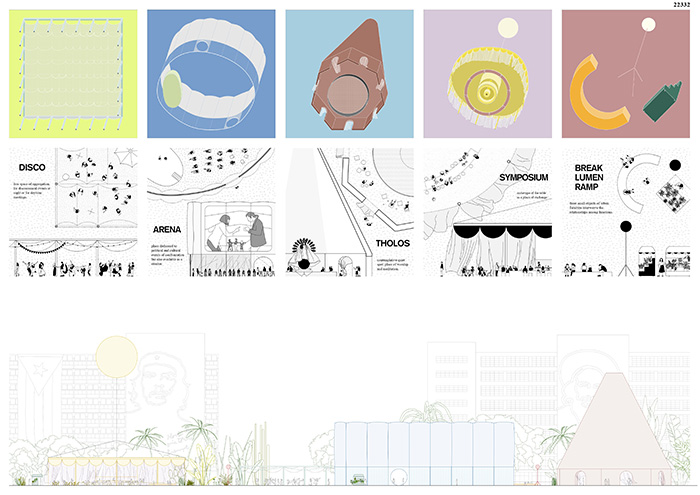 The colorful and lively Cuba is widely known for its welcoming festive spirit.
CONVIVIUM embraces this reality to redesign and claim an emblematic space of Havana dedicated to celebrative events and parties. Four urban objects reactivate a void space in the city, focusing on the idea of celebration to describe a wider system of political, social and cultural environments.
In the vivacity of the place, they aim to generate opportunities for dialogue among the various cultures, to promote a renewed sense of belonging to places through flexible spaces with multiple purposes, able to reveal the “sense of place” for the ability to accommodate the course of human activities.
DISCO represents a space for discomusical events at night and for daytime meetings. ARENA is dedicated to political and cultural events of confrontation but also available as a cinema. THOLOS, a contemplative quiet spot, is a place of worship. SYMPOSIUM enhances the archetype of the table as a place of exchange. Three other small objects of urban furniture – BREAK, LUMEN and RAMP – complete the design of the square by interweaving the relationships among functions.
CONVIVIUM allows to feel involved in the activation of new points of view on reality, strengthening cultural ties with Havana and with the people who live it. The aim is to suggest new visionary landscapes that can indicate a possible path for the future by highlighting how the use of urban spaces change more quickly than do urban planning policies and regulations. 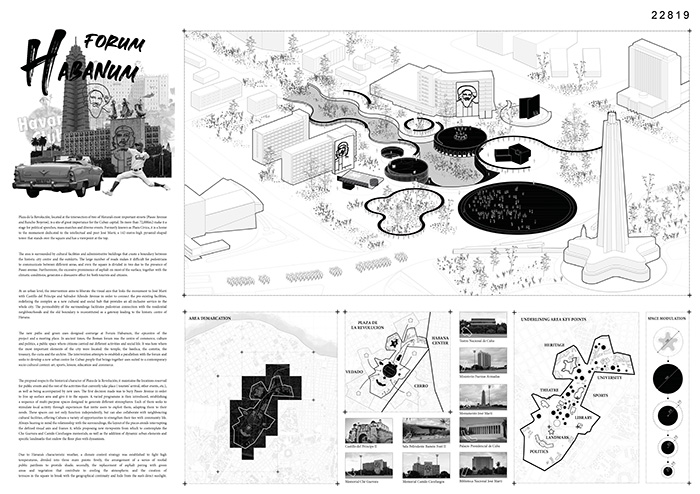 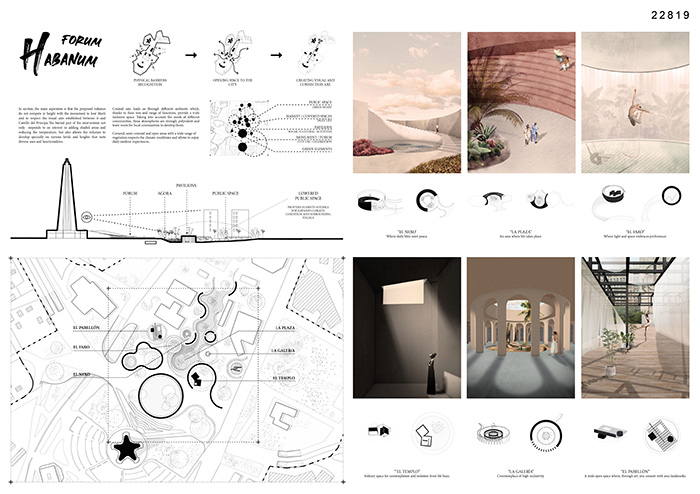 Plaza de la Revolución is a site of great importance for Havana. Its 72,000m2 make it a stage for political speeches, marches and diverse events. The area is surrounded by cultural facilities and administrative buildings that create a boundary between the historic city centre and the outskirts.
The intervention aims to eliminate the boundary and liberate the visual axis that links the monument to José Martí with Castillo del Príncipe in order to connect the pre-existing facilities, redefining the complex as a new cultural and social hub that provides an all-inclusive service to the city.
The new paths and green axes designed converge at Forum Habanum, the epicentre of the project and a meeting place. The intervention attempts to establish a parallelism with the Roman forum and seeks to develop a new urban centre for Cuban people that brings together uses suited to a contemporary socio-cultural context.
The proposal respects the historical character of Plaza de la Revolución; it maintains the locations reserved for public events as well as it accompanies them by adding new uses. A varied programme is then introduced, establishing a sequence of multi-purpose spaces designed to generate different atmospheres. These spaces can not only function independently, but can also collaborate with neighbouring cultural facilities. The layout of the pieces frames the visual axis and proposes new viewpoints from which to contemplate the Che Guevara and Camilo Cienfuegos memorials, as well as the addition of dynamic urban elements and specific landmarks that endow the floor plan with dynamism. 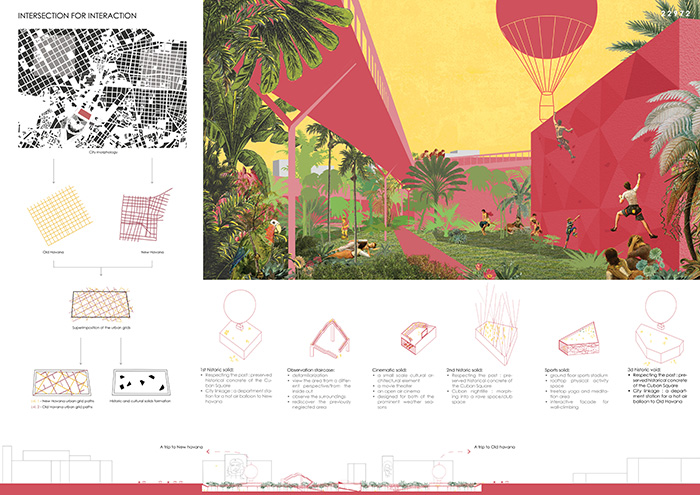 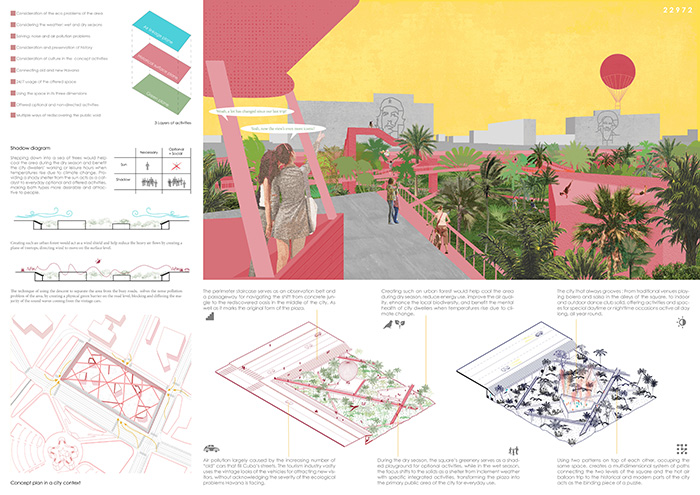 The conceptual integrity of the new square’s role as a linkage between old and new Havana is based on the superimposition of the urban grids of both parts, creating a multidimensional system of paths connecting the three levels of the square and a complex of solids, two of which serve as a platform for hot air balloon trips to the historical and modern parts of the city and act as a metaphor for unity.
By preserving some of its concrete surfaces as artifacts, Plaza de la Revolucion is being honored for its role as a spark for the reformatory era in Cuban history.
The technique of using the descent to defamiliarize the public void and make visitors see the square in a new way, pointing out the hidden beauty of the plain surface previously neglected by everyone, solves the noise pollution problem of the area, alongside sheltering people in windy weather. The perimeter staircase serves as an observation belt, marking the original form of the plaza, navigating the shift from concrete jungle to the rediscovered oasis in the middle of the city.
This greenery helps cool the area, reduce energy use, improve air quality, enhance the local biodiversity and serves as a shaded playground for all sorts of activities with the option of solid sites. Whereas, during the wet season, the focus shifts to the solids as a shelter from inclement weather with specific integrated activities and green surroundings, transforming the plaza into the primary public area of the city.