Participate in the ARCHsharing contest and come to build your first building with Techo Haiti. For the fifth edition, archsharing is in collaboration with Techo Haiti to build a school at 35 kilometers from port-au-Prince.

Haiti is a Caribbean country located on the western third of the island of Hispaniola and part of the group of archipelagos that form the Greater Antilles with Cuba, Jamaica, Puerto Rico and the Dominican Republic.

Its history has been turbulent since the arrival of the settlers with a Spanish and then a French governance. A large part of the indigenous population was exterminated and in order to promote colonial industry, hundreds of thousands of slaves from the African continent were brought in. Haiti became independent in 1804. Since then, various political systems have followed one after the other. Today, the Republic of Haiti is facing many problems, whether economic, political or environmental.

One of the country’s greatest current challenges is to recover from the natural disasters that have devastated the island in recent years, most notably the earthquake of 2010. Located only a few tens of kilometres from the capital, the epicenter of the 7.0 magnitude earthquake on the Richter scale killed more than 300,000 people and left 1 million homeless. In the same year, a cholera epidemic spread due to poor sanitary conditions, killing more than 7,000 people. The island was also affected by Hurricane Matthew in October 2016. If the Dominican Republic has had fewer than a dozen deaths during the hurricane, Haiti counted several hundred. This difference shows the delicate situation in which the country finds itself and its lack of resources to deal with crises. It will take several more decades for the country to recover from these successive disasters.

Following these events, the humanitarian association TECHO, already present in many South American countries, decided to participate in international aid by opening a branch in the country and creating TECHO Haiti. Their action, mainly focused on the demand of emergency housing, has resulted in the construction of more than 2541 houses. However, their action is not only concentrated on housing but also on improving access to education, which is a major concern. According to UNICEF, more than 25% of the population is illiterate (2012) and only 50% of children go to school. Following the earthquake, more than 80% of schools in the west of the country were destroyed or seriously damaged, leaving the government powerless.

ARCHsharing proposes, in partnership with the humanitarian association TECHO Haiti, the construction of a rural school for the TE NWA community, north of Port-au-Prince. The project will have to meet many social, constructive and economic challenges while proposing solutions that improve educational conditions. The school will include 7 levels of classes and will benefit more than 50 children in the community. Today, a tent houses the daycare and a classroom made of plywood panels serves as a school. The site planned for the construction of the school is on a large site where the class is currently taking place. The program proposes two phases of construction, and an exterior design. All the phases have to be thought simultaneously, it is simply necessary to think that the first phase must be able to function independently from the others. 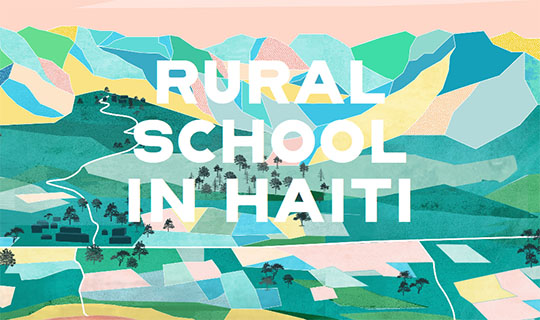