The Science Island Design Contest is a one-stage anonymous competitive process to select three finalist practices who will each be awarded an honorarium of €15,000. Following the conclusion of the competition, the three winners will enter into a Negotiated Procedure without Publication of a Contract Notice with Kaunas City Municipality, who will decide on a single, preferred bidder who will be awarded the contract and take the project through the design stages.

The competition is organised by London-based competition specialists Malcolm Reading Consultants (MRC). MRC’s role in the competition includes writing the brief and competition materials, consulting with stakeholders and ensuring absolute independence in the competition process. Competitors’ submissions must be sent to Kaunas to arrive no later than 14.00 GMT +3 Wednesday 14 September 2016.For full details, please see the Competition Conditions.

The project’s total allotted building-related project cost is €25M, including taxes. The new Centre can be located anywhere within Nemunas Island with a total site area of up to 13,000 m2, which includes 9,000 m2 for the Science and Innovation Centre building.
The new Centre will include a mixture of permanent and temporary galleries, a virtual planetarium, an ‘Experimentorium’, research laboratories, a cafeteria and a flexible events space. It is foreseen that circa 4,000 m2 of outdoor space around the Centre on the Island could be used as external exhibition space, creating an attractive green space in the. Visitors to Science Island are anticipated to number circa 300,000 per year.

As one of the key aims of the Centre is to promote visitors’ active engagement with renewable energy, the jury will give special attention to the functionality, innovation and energy-efficiency of the design; this should achieve the best use of natural and renewable resources. The contest requires teams to produce concept designs in physical and digital forms as six A1 presentation boards covering:

To accompany this, teams will need to produce a 500-word project description, and supply accompanying plans, sections and elevations.

The purpose of the design contest is to:
Develop an urban integration plan that identifies a suitable area on Nemunas Island for the new National Science and Innovation Centre and establishes a compelling setting and identity for the project;
Create a concept design for the new National Science and Innovation Centre;
The design for the new building should:
Be an exemplar of sustainability.
Sit comfortably within the Island and landscaped setting, retaining the Island’s panoramic views.
Be an original and distinctive architectural composition which could become a symbol of the Island.
Fit naturally within the urban grain of Kaunas, located in this strategic position within the city.
Enhance the image of Kaunas, becoming a part of the city’s identity.
Create harmony with the existing Arena, and develop a compositional relationship with the Naujamiestis and Aleksotas areas.
Consider routes through the Island to a potential new bridge link to the proposed concert and convention centre located on the south-bank of the Nemunas River in Aleksotas. 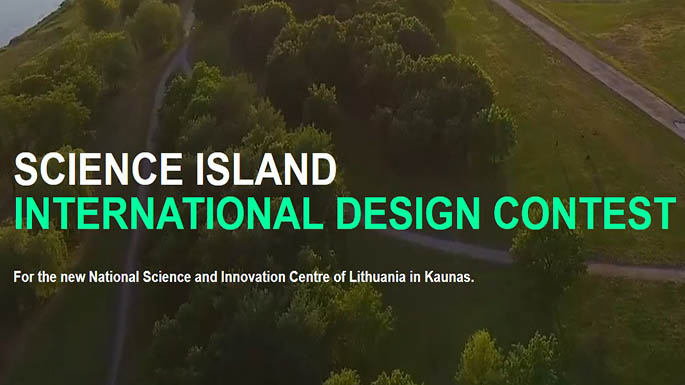