Self-Evolving City of the Future

The Organizing Committee of UIA Seoul 2017 invites brilliant ideas that best demonstrate the theme of the Self-Evolving City of the Future. Winning entries will be displayed in UIA Seoul’s special exhibition in September 2017, and their fabrication expenses will be supported.
THEME
Urban civilization is in transition. As climate change resulting from fossil fuel use is expected to have a catastrophic impact on human life in the near future, the meaning of visionary projects from the past will fade. In particular, East Asian mega-cities are in crisis; in order to make them more sustainable, there is a need to go beyond modern urban models. These models were predetermined, closed in end, and thus not responsive to self-evolving processes. By contrast, future cities will shift from the pursuit of material civilization to the pursuit of nature.
Planning and evolution are two processes that generate urban form and place in history. Whereas planning is designed to satisfy the ideologies and motivations for a built environment at a specific time, evolution refers to an accumulation of all changes that occur as a result of the unique conditions of a given place and lifestyle. Although sometimes contradictory, they are complementary processes. Many urban problems have occurred because architects did not effectively consider the combination of planning and evolution. However, future urban planning will include the two levels of planning and evolution simultaneously, which we refer to as The Self-Evolving City.
This reflects a sustainable city that can adapt to urban evolution, one that continues to evolve through a large dataset of urban plans, and for which new optimal solutions can be predicted by simulating all viable options. Similar to a human brain, such cities do not continue to function as automatic machines, but have their own value system on which to base judgments. To do this, Self-Evolving Cities utilize schemes, cognitive maps, and a model of mental states to represent the self. Through this self-awareness process, a city can evolve its own unique urban identity. The emergence of <The Self-Evolving City> will spur a drastic change in the role of architects in urban planning.
ELIGIBILITY
The competition is open internationally to professionals in the architectural, landscape, urban design, and artistic fields.
Students who are enrolled in the current academic year are not permitted to participate in this competition; we recommend that they participate in the other competition, Post-Human Urbanity,organized by the Executive Committee of UIA Seoul 2017.
Team size is limited to three or fewer members.*Note
All members in the team are regarded as co-authors of the submission. They will be acknowledged as such in all announcements, displays, exhibitions, and other materials related to the competition, in the order in which their details are listed in the registration form. However, you should select a team representative for effective communication.
SCHEDULE
SUBMISSION

We require two presentation images to be digitally submitted in separate files:

We also require a 100-word summary of your entry in English to be submitted with the presentation images.

PRIZES
Individuals or teams that secure the top five awards in the Idea Competition will be invited to display their brilliant ideas at the special exhibition The Self-Evolving City, which will be held at the Seoul Museum of Art on September 3, 2017.(The number of winners entries can be reduced or increased in accordance with the exhibition scheme)
The winners will be able to further develop their ideas with a cash prize of 7 million KW. This cash should be used for the fabrication and installation of the conceptual images in the exhibition.
Go to the competition’s website 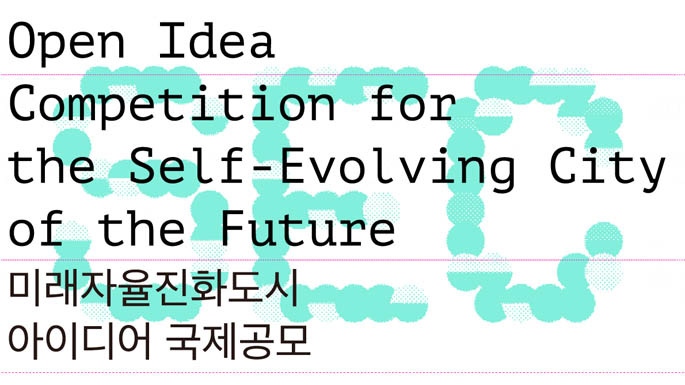