Located in the mid-east region of Henan Province, Kaifeng is the emerging sub-center city of Henan Province, city of core development zone of Central Henan Urban Agglomeration and core city of Zhengzhou metropolitan area. With a long history and abundant tourism resources, Kaifeng, the ancient capital of eight dynasties, is also the gathering place of intangible cultural heritage. With the planning advantage of integrated development of Zhengzhou and Kaifeng, the tourism economy and tertiary industry in Kaifeng enjoy further development. As the first batch of “famous national-level historic and cultural city” released by the State Council, Kaifeng boasts a profound history of thousands of years.

As the “first batch of provincial historical and cultural blocks” in Henan Province, Shuanglong Lane has traditional residences that boast significance in value and protection in architecture, art, history, culture, etc. Relevant data shows “Quadrangle dwellings in Shuanglong Lane Protection Zone is one of the quadrangle dwellings districts well-preserved in Central China and the model of civil architecture in the late Qing Dynasty and the early Republic of China. It carries the residence and custom culture of Kaifeng and plays an important role in the protection of ancient city features and continuation of historical context of Kaifeng. “The traditional residence protection zone to be established here constitutes an integral part and a new tourism spot with Bian embroidery, arts and crafts and official kilns of the Northern Song Dynasty.

Kaifeng Folding, Blur Shuanglong Currently, there are a number of urban improvement projects to repair ancient towns in the name of repairing traditional blocks. However, few of them succeed. This space scene design competition focuses on No. 24 court of Shuanglong Lane and collects various solutions for one court from global designers; starting from one point, the strong cultural IP of Shuanglong Lane is created to lead industrial upgrade and transformation of Shuanglong Lane; it’s a innovative design talents introduction, a collision with new scenes and an intensive and focus spread.

Through competitions with Shuanglong Lane No. 24 court as typical cases, we hope to motivate teams to review modern application of Song culture from the perspectives of art, drama, design, communication, consumer psychology after getting rid of restriction of traditional blocks renovation based on Song culture of Kaifeng, locality and historical inheritance of Shuanglong Lane. Meanwhile, they are motivated to explore the interaction between innovative types of business and space with techniques such as time-space folding and boundary blur to inspire new behavior mode and consumption scenes.

In the space of No. 24 court, participants can conduct business type designs including but not limited to homestay, catering, bars, cafes, book bars, little theatres, art galleries, museums, intangible cultural heritage workshops, flower shops, cultural and creative stores, integration space and any other types of business believed to show up in the space in light of historic culture and business performance of Kaifeng and Shuanglong Lane.

In the space design, space innovation triggered by collocation, integration and alternation of innovation business types is encouraged. However, feasibility and practicability are required with adequate consideration on cost. The application of new technologies of AI, 5G and VR is encouraged. For constructions, project plot ratio and max headroom requirements must be followed with considerations given to the coordination of the space and business type of the entire Shuanglong Lane and innovative usage of underground space.

We hope that Shuanglong Lane No. 24 Court competition can explore a new way for the improvement of ancient blocks in China and lay a brand new standard for the overall renovation of Shuanglong Lane. Meanwhile, it starts a brand new dimension for the application of aesthetics in Song Dynasty in the 21st Century.

Bonus （Bonuses are all pre-tax amounts）

The Most Popular Award, RMB 5,000/person 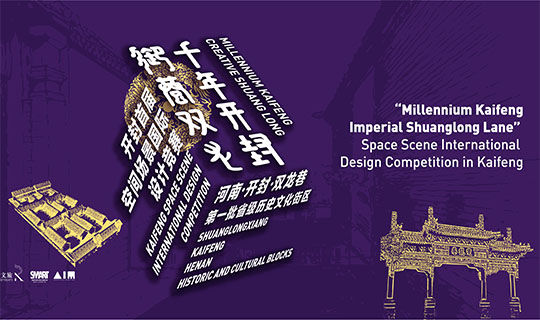