Design Competition Launched for Springdale’s Veterans Memorial – Unlike other NWA communities, Springdale currently lacks a monument to those who served our great nation. A campaign is now underway, however, to rectify this omission. The Springdale Veteran’s Memorial Organization (SVMO) is calling on all established and aspiring architects, designers and planners to participate in an open design competition for developing a portion of Springdale’s JB Hunt Park for the purpose of recognizing and honoring those who served.

The competition challenges participants to think about how this memorial should serve to provide a symbol of acknowledgement of the courage, sacrifice, and devotion to duty of those who were among the nation’s finest and whose service embodied values and ideals prized by this nation since its inception. The memorial should stand as a symbol of Springdale’s appreciation for the sacrifices of those who served our nation, expressing respect and gratitude. The memorial should be reflective and contemplative in character.

The leadership of Springdale’s City Council has given this veterans memorial effort overwhelming endorsement offering a parcel of land at JB Hunt Park for consideration in its establishment.

Jeffery Vinger, Colonel (USAF, Retired), SVMO Board member and professional advisor for the design competittion, said the competition aims to establish a prominent and artistic veterans memorial in a befitting setting that will further enhance the appearance of JB Hunt Park, its attraction and draw, its function and utility for our community on a year-round basis.

The competition announcement phase will last through 31 December allowing entrants the ability to register, review the design factors and criteria and ask any clarifying questions. The deadline to register is 31 December. The design phase will commence 1 January and conclude with the submission of all entries no later than 12PM 31 March 2020. A diverse jury with members who include the Dean of the School of Architecture at the University of Arkansas, the designer of the National WWI Memorial in Washington D.C., The President of SVMO, a local business owners and veterans will review all submissions. On Thursday, 7 May the SVMO will announce the winner and runners up during the Springdale Veterans Memorial Unveiling Event. Over $5,000 will be awarded in prizes. A public exhibition of entries will be held at the event.

Col. Vinger explained, ”The SVMO recognizes it’s pursuing a rather ambitious project and envisions the cost of the memorial to likely be in the millions of dollar range raised entirely through private contributions from individual donors, foundations and corporations. We’re under no illusions that fundraising for this memorial will be the most challenging action we face once a design is settled on.”

The SVMO hopes to raise sufficient funding to begin construction with a ground breaking ceremony on Memorial Day 27 May 2021 and commission the site with a ribbon cutting ceremony opening the the memorial to the public on Veterans Day 11 November 2021. Details about the design competition, including the competition rules document, registration forms and competition brief, can be found at the SVMO website. 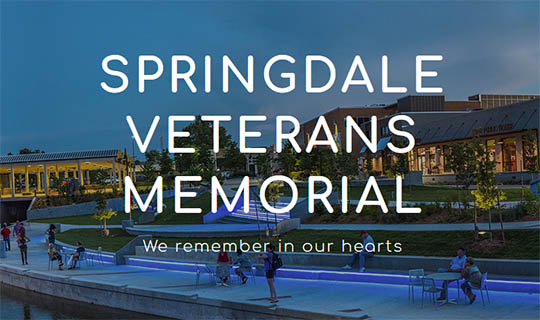