The winning entry, selected by the jury, will be constructed for public use during the summer and fall season of 2016.

All entries will be documented and exhibited for public viewing, to generate awareness and discussion about ‘street as public space’. The organizers of THE BENCH will facilitate ongoing discussions of the topic during the use of THE BENCH and will seek ways to disseminate THE BENCH (i.e. donate to public school/park) at the end of the season.

The objective of the competition is to re-envision and re-engage the street as a public space. The competition invites ideas to transform the street as a public space through an infrastructure intervention, a seating-space. The challenge is to design a public seating that can engage and transform the dynamics on the street, triggering and sustaining temporary (short) social and cultural transactions. THE BENCH will be installed on the street curb’s edge facing towards two local retail shops, MAKE Coffee + Stuff and Tutti Frutti Frozen Yogurt, framing an urban space.

THE BENCH must function as a public seating with minimum of 12 seating space-surfaces. Ease of use and access is important consideration to facilitate instant, ongoing and changing street dynamics. General street safety including traffic related issues and legibility of its physical presence are important considerations in the design. Ancillary functions such as bike racks, planting areas, and storage can be considered as a part of the design, as long as they do not interfere or compromise the ‘seating function’ and ‘street-safety’ aspects of THE BENCH.

THE BENCH, as a temporarily public infrastructure, will be installed on the street’s edge [see site description] during the summer and early fall of 2015. Once installed, THE BENCH will remain outdoors exposed to the weather conditions and public interactions for the entire duration of its season. The fabrication, installation and the material condition of THE BENCH must consider such exposure and interaction. The design must also consider the structural and functional integrity of THE BENCH for the entire duration of its installation season. The sponsoring businesses will assume the lease of the ‘site’ from the city and general public liability for the duration of the season.

From digital fabrication to reuse/recycle, the competition is open to all mediums and methods. However, all entries are expected to position their ideas in responding to following general criteria:

– Simplicity in construction and ease of assembly

– Exposure to elements of the street environment

– Ease of cleaning and maintenance of functional and structural integrity, including general safety within the street environment.

A set of three benches made out of stacked 2×4 lumber and painted plywood sheets has been planned for the site at a budget of CD$300. The entrants are asked to challenge this plan. A total amount of CD$500 will be granted to the winning entry as the project budget/stipend. The competition invites new ideas to realize an affordable and efficient public space-structure for individual retailers, including innovative fabrication-construction, in-kind donations, and recycle/reuse/re-purpose of materials. The entrants can use a portion or all of the budget/stipend towards the realization of THE BENCH. 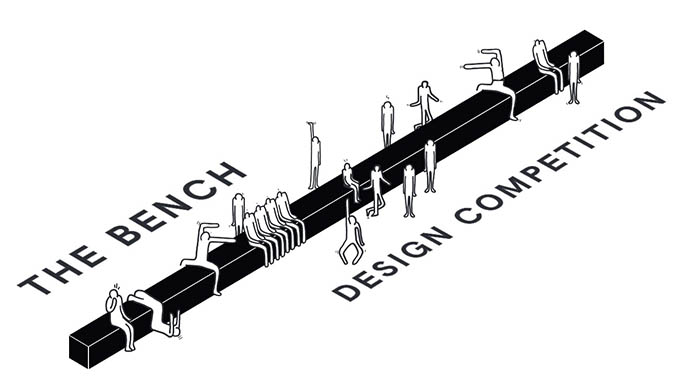