The Reconstruction of Commons today – Shelter 2017

In rural regions and fishing villages there still exist “commons” such as mountains, forests and water areas that are jointly managed and utilized by the local community. It could be said however, that such commons are almost nonexistent in urban areas (especially in Japan). This is because in the process of modernization, land, building, and objects were designated either under private ownership or public ownership, and a society based on systems of exchange through currency and redistribution through tax had in particular come to shape urban space. People are to an extent satisfied with such urban spaces so long as the increase in population and economic growth continues, yet when such aspects begin to show signs of decline it becomes a matter of the survival of the fittest, giving rise to various issues such as widening disparity. As a countermeasure, what is indeed necessitated is the reconstruction of commons that engage people within the urban context. Furthermore, in rural regions and fishing villages, the natural resources of commons that have been maintained thus far cannot be sufficiently utilized due to the declining population, as a result becoming more difficult to sustainably manage. That is to say, the reconstruction of commons is something that is necessitated not only within the city, but also in rural regions and fishing villages.

What do you consider as shared resources in the city? Can we maintain and manage the resources of rural regions and fishing villages as we have done so far? How can we ensure accessibility to resources? How can architecture respond to these issues? I look forward to receiving many dynamic and interesting proposals from students.

Works must be received at Shelter Design Competition Office no later than 18 October.
※Due to the large number of applicantions, we are unable to individually notify each applicant regarding receipt of their submission.
※Confirmation of receipt and the required time for delivery is the responsibility of the individual applicant. 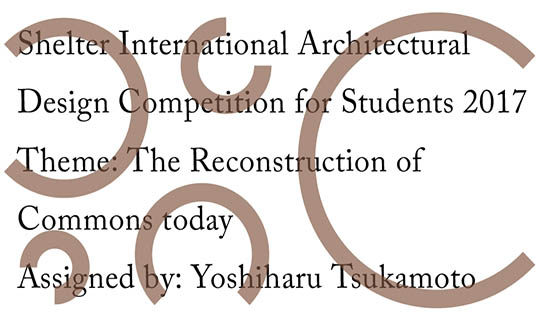