In the three years since our editorial collective launched The Site Magazine we have collaborated with designers and design institutions around the world to probe social, economic, cultural, and political questions through the lens of architectural knowledge. The discipline of architecture is simultaneously broad and incisive: the practice of architecture demands a constant reinvention of its role, a redefinition of design’s limits. Our forthcoming series “Does Architecture _______?” confronts the obstacles and opportunities afforded by architecture’s evolving agency while continuing to delineate relevant contexts for spatial design. “Does Architecture _______?” is conceived as a series of five thematic issues, each one curated to discursively champion or constructively critique the latent tensions and potential of the built environment that we know, or can imagine.

We are open for submissions for issue 1 and issue 2.

Originating in the necessity of providing shelter, architecture’s providential concerns are borne of a sensitivity to the land and its inhabitants. In designing for the well-being of humans, animals, and terrestrial and extra-terrestrial ecologies, architecture is capable of operating across intimate and infinite scales to transform  environments and enable new growth. In this issue, we want to discuss affirmative spaces. We’re interested in how material realities can concretize emotional and spiritual affect, how contested geographies can move towards processes of healing, how interiors affect health and consciousness, how a space can empower its users and bring emplacement to communities. We’re interested in paradigms of technology and tradition, in symbiotic relationships, holistic perspectives, and Indigenous knowledge. Space has a vitality that goes beyond the sterility of the drawing board or the virtual reality of the screen: in what ways can architecture and landscape embody physical, mental, emotional and spiritual connections? What makes a place sacred, healthy, inclusive? As a civic commitment, building has the potential to produce lasting good: how do we create from and for the primacy of interconnectedness rather than dissonance?

Today, the majority of people in the developed and developing world live either in cities that are the legacy of colonialism, capitalism, and other patriarchal structures, or in landscapes drawn and redrawn by the enterprises of colonial and corporate expansion. Given the magnitude of resources and capital needed to bring architectural design into fruition, the values and objectives of institutional stakeholders will inevitably continue to shape architecture. In other words, the built environment is never apolitical; it is persistently fashioned as a socioeconomic artifact. In this issue, we’re interested in the tectonics of inequality: Who are public spaces built to exclude? Will the robotization of the environment augment current cognitive biases? What xenophobic assumptions are embodied into the fabric of the spaces we must traverse on a daily basis? With contemporary geographies riddled by political divides, does architecture produce disparity or can it propagate new democracies? What tools do designers have to destabilize structural prejudice?

We’re interested in responses to either of the calls. We are also accepting submissions for two-part pieces that address both sides of the discussion. Proposals should be no more than 250 words and include sample images, anticipated length/format of the piece, and sources as well as a brief bio. 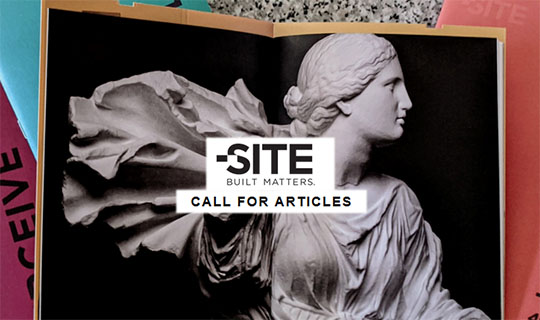