Japan and its people have been at the forefront of a digital revolution since the past four or five decades. The country has long existed between two realms. On the one hand, we have the traditional “old world” of temples, tea ceremonies and calligraphic cherry blossoms. On the other hand, there shines a futuristic “new” world of bullet trains, AI dogs, anime pilgrimages, 2.5-dimension theatres, digital currency like J-coin and receptive gaming consoles. Japan has been a place of fascination throughout the years, particularly to those interested in media and popular culture, business, science and technology, and other related areas such as transport and tourism.

Experts are debating the effects of ‘obsessive’ digitization in the country which is isolating the people from one another. A high percentage of Japanese people are aging while the younger people are staying away from interacting with one another. Contemporary Japan and the whole set of its younger population are immersed in high speed internet and mobile-app culture. With almost everything available to people virtually on the internet and a click away on the mobile applications, people in Japan are the most exposed to a digital culture than most of their contemporaries in the world.

The digital revolution stands out from its predecessors in a critical way: rather than making it easier for humans to use their surroundings more effectively for their own benefit, technology is displacing humans in the workplace. has the power to both reform the age-old education setup and even to destroy the ethics of the prevalent system? But its impact on the human institutions and functionalities can never be ignored.

The onset of digital revolution has questioned the existence of many institutions and technologies around the world. High speed internet and communication systems have made available a large pool of data online. It is easier than ever for any person to gain, share and spread knowledge on the internet than through traditional methods and institutions. Libraries have been considered as the ‘Temples of learning and knowledge’ through ages.  Libraries are knowledge-dispersion centers with a large pool of books, documents, manuscripts, papers and what not.” Because people so often identify libraries with physical books, new digital information and communication technologies have spawned speculation whether libraries, as such, are obsolete. Digitization creates new challenges and opportunities, however, forcing libraries to both take on new roles and perform traditional roles in new ways.

The aim of the competition is to create an iconic 21st century ‘public library’ in the city of Tokyo, Japan and debate its role in a ‘digital age’. The proposal must aim to become a solution to the frequently questioned vitality of a library by enhancing and transforming its capabilities as a ‘knowledge sharing and research prototype’ that will become a model for the future libraries of the world. The participants must strive to create the ‘right’ model for a library in the digital city of Tokyo. They must aim to justify the validity and viability of either a traditional library, a futuristic digital library or a ‘hybrid’ in a changing world. The participants are free to create their own interpretation of a library which should be more than just a ‘space to collect and store knowledge’. They are free to tweak the existing program of a library and make space for new spaces and technologies that will give a more holistic outlook to a public library.

As the roles of libraries change, so will the physical buildings they occupy. A library that lets people eat, drink, and converse while they share information could be “a strong mission statement” for a new-age library. A library building should aim to become more open, dynamic and permeable architecturally so that it could attract more and more people. The participants must aim to break down the rigidity of traditional library space and create an informal learning environment for the end users. Tokyo is a megapolis that is taking gigantic steps to become the city of the future. The library should become an icon and an important landmark for the city where people could converge and exchange knowledge. The impact of the library should be prolific, intense and symbolic that should reflect the contemporary nature of the city.

This is an open international competition hosted by archasm to generate progressive design ideas. There are no plans for the library to be built. The competition is organized for education purpose only. 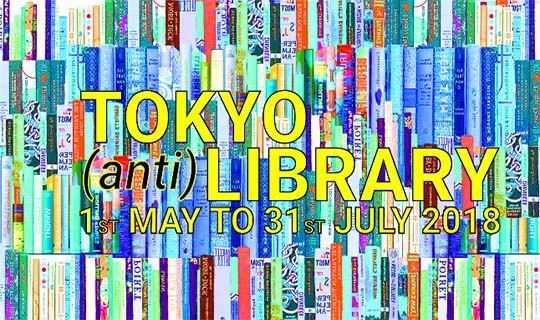