Plastic has a huge contribution in the making of the modern man. It has revolutionized human activity and living because of its versatility as a material. It made space travels possible. It has revolutionized medicine. Daily, it saves millions of people making food resources safe and accessible to the poorest populations of the planet. Modern life is addicted to and dependent on this versatile substance, which is found in everything from cars, planes, computers and equipment to clothes made of polyester and nylon, to the adhesive seal on most teabags.

However, plastic is and never was the real enemy. What is needed is not a world without plastic. What is needed now is a revolutionized awareness about waste management and the way it is practiced.  Our materialistic society has created a problem of consumption and a destructive cycle of overuse.  Architecture should lead by example and generate awareness about recycling waste and sustainable practices that can make way for a utopian setup.

Tomb of waste aims to create a powerful and a poetic architectural installation that raises awareness about the impact of plastic waste on our planet. The installation should captivate public attention and elevate people’s perception by promoting single use plastic as a valuable, versatile and an accessible material that can be used to creatively transform our built environment.

Tomb of waste competition should create an object to show the world the consequences of disposable culture. It should eradicate the concept of ‘waste materials’ and raise awareness of our own wasteful consumption of single use plastic. Architectural design should play an important role in supporting the circular economy of recycled plastic materials thus keeping plastic in the supply loop and out of our ecosystems.

Prizes worth EUR 2500 are up for claim with the distribution as follows:

Apart from the winners, the jury will select ’10 Editors’ Choices’ who will be featured on our website and several other international magazines and websites across the world. The winners and Editors’ Choices will be provided with an honorary certificate. 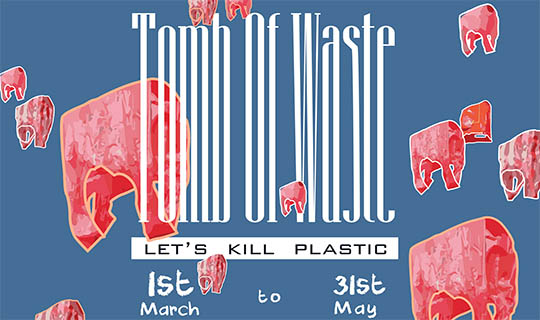