The Municipality of Kotor,Montenegro announces  the international single-stage anonymous competition for conceptual, architectural and urban solution for 4 star tourist settlement  on urban lots up26 and up 138, within the scope of detail urban plan ‘ Prcanj ‘.

Prcanj is one of the first settlements on the territory of Montenegro’s Kotor and Risan Bay which developed in the ancient period. The archaeological sites from the ancient period in the area of Prcanj, about which there are written texts, have not been explored yet. Prčanj (Perzagno) is part of a network of settlements which make an entirety with Kotor, enlisted on the UNESCO list of world natural and cultural heritage due to its specificity.

A tourism settlement should be designed on the concerned location which will consist of the main building of the hotel on UP26 (block 1) and villa objects on UP138′ (block 7). It is necessary to provide 90 beds at maximum.

2. Architectural and design solution of the facility and relation towards the area 0-15 points

3. The achieved spatial and functional qualities of the facility 0-15 points

4. Economic justification of the proposed solution as a whole 0-10 points

5. The achieved level of ecological standards within the framework of the proposed solution and the level of use of alternative energy sources 0-10 points

The jury will award the first, the second and the third prize in the following amounts:

Complete documentation for competition can be downloaded here 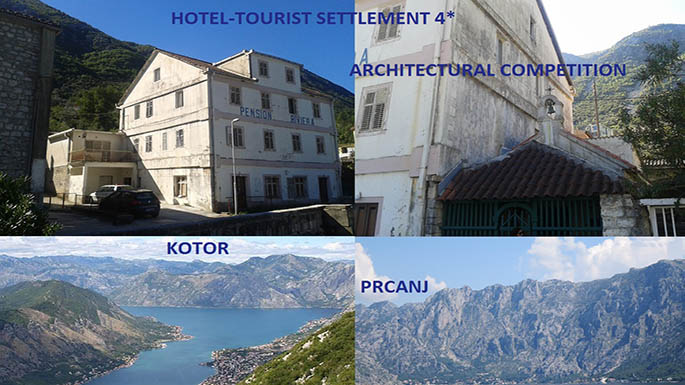