The overriding purpose of this proposed monument is to honor and express deep gratitude for the millions of Americans and Vietnamese who fought side-by-side to stop communist aggression and give the South Vietnamese people a chance to live in freedom. To give meaning to this difficult struggle, it is important for many of the Vietnamese people who fled their country and escaped communist persecution, to show their appreciation to those that helped them during and after the war.

In Louisville, Kentucky, a diverse group of citizens led by Yung Nguyen, an immigrant from Vietnam has conceived this idea of a monument of thanksgiving that would be a place of special recognition for the tremendous sacrifices the American and South Vietnamese Armed Forces made during the Vietnam War.

They formed a foundation to develop this concept and to raise private funds to implement it. The foundation’s name is “Tri Ân”, which means “deep gratitude” in the Vietnamese language. It is the foundation’s intent to fund and build the Tri Ân Monument based upon the selected design.

A one acre site was secured in an existing public park dedicated to veterans. It is in Jeffersontown, a suburb of Louisville. Wanting the most inspirational and unique monument possible, they decided to sponsor an architectural competition, open to everyone, to help them find the most creative ideas.

It is the aim to select a monument design that evokes from the visitor the strongest emotional response, the deepest sense of contemplation, the best spirit of thanksgiving, and the most respectful mood of remembrance. The selected entry will have been judged to:

Have many levels of meaning. Be unique, dramatic, timeless, and contemplative. Be in harmony with the landscape. Express the feeling of ‘Deep Gratitude’.

It is situated on a sloping hillside site within a park with other monuments to veterans nearby.  As envisioned by the Tri Ân Foundation, the physical monument is an environmental setting made up of an assemblage of features and spaces that will accommodate the anticipated uses, and serve to engage the attention, imagination and feelings of each visitor as they experience it.

There are many compositional elements which could be used to create the environmental setting. The infrastructure may include landscaping, pavement, architectural structures, fountains, walls, seating, fencing, and other site features; augmented by graphic depictions, sculptures, flags, military symbols, signage, exhibited artifacts, lighting, or any other methods that would help to achieve the monument’s purposes.

This is an open world-wide competition and anyone with an idea is welcome to submit an entry—artists, sculptors, architects, landscape architects, graphic designers, students, professionals, etc. Registrations will be accepted from individuals as well as from teams or firms.

In addition, the jury will select at least 10 entries for Honorable Mention, with no monetary award.

The second stage will involve a detailed evaluation of the three finalist’s designs, which will result in the selection of the winning design by the Tri Ân Foundation Board of Directors. 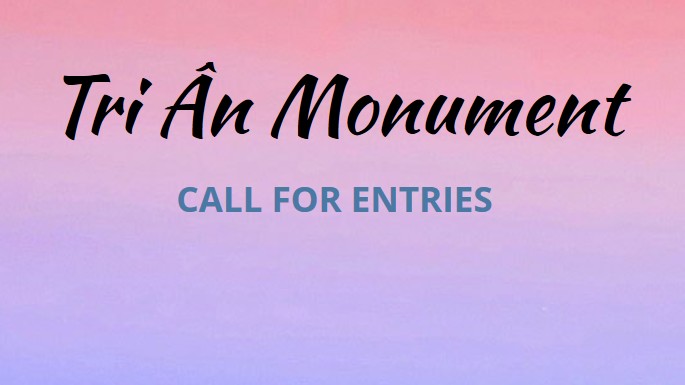