The Republic of Uganda is an East African nation and former British colony, which gained independence from the U.K. in 1962. Since then it has retained many of its anti-gay laws and even gone so far as to institute newer, harsher penalties for homosexual acts. There are a few brave individuals that are fighting for LGBT rights in Uganda, despite the huge risks they face for doing so.

One such individual is the Ugandan filmmaker and activist Kamoga Hassan whose new documentary follows Ugandan LGBT asylum seekers asking them to share their life experience. Bee Breeders architecture competition organisers were inspired by these bold efforts to promote equality, and so launched the Ugandan LGBT Youth Asylumarchitecture competition.

We are asking participants for ideas and visions of an Ugandan LGBT youth centre that will act as an asylum for those young people who are no longer welcome in their own homes. It will be a place that LGBT youths can go if they have been hurt or abused in any way, are looking for help or even just a place to meet other similarly affected individuals.

The Ugandan LGBT Youth Asylum should be a facility that offers help in the form of legal advice, psychological support, and basic accommodation for those who need a place to stay. The building itself should have recreational characteristics, as well as be able to heal and empower while being located in an extremely hostile and aggressive social environment.

Competition is open for all. No professional qualification is required. Design proposals can be developed individually or by teams (4 team members maximum).

3 winning proposals and 6 honourable mentions will be selected. Bee Breeders architecture competition organisers will award a total of US $5,000 in prize money to competition winners as follows:

The winners will get international art and design media coverage and will be featured on the Bee Breeders website.

Bee Breeders architecture competition organisers will also acknowledge the outstanding performance of all winners and honourable mentions with Certificates of Achievement. 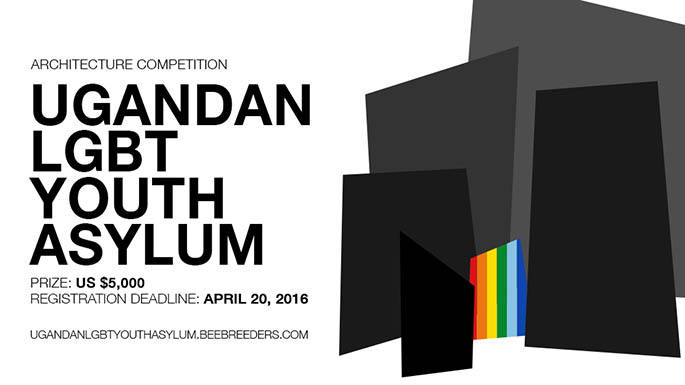