YAC with the support of RIAM, lays the foundations for University Island inviting all the designers to feel completely fascinated by the magnificence of one of the most breathtaking places of the Venetian Lagoon and to plan a new future composed by activities, good attendance and the vitality of thousands of students who every year choose Venice as an esteemed location for their studies.

A few kilometers from the San Marco bell tower in Venice sits the desert island of Poveglia. Having no connection to mainland Italy and with dark rumors abound, the island was eventually abandoned as visitors stopped traveling there. It remained that way for nearly 50 years until the Italian Government recently decided the island should be revived. YAC asks architects worldwide how they would transform Poveglia into a top research university campus where students can study and enjoy themselves?

€ 20.000 cash prizes and 1 year subscription CASABELLA. Awarded proposals will be internationally exhibited and published on architectural magazines and websites.

• 1 UNI A1 layout(594mm x 841mm), .pdf format, maximum size 10 mb, horizontal or vertical layout, to be uploaded on the personal login area. Such layout must contain:

Text shall be synthetic and written in English. Layouts cannot contain any name or reference to designers. Layouts cannot have nor group’s “TeamID” on it. Such code is meant to appear on the filename only, since jury will not be capable of seeing it during voting procedure. 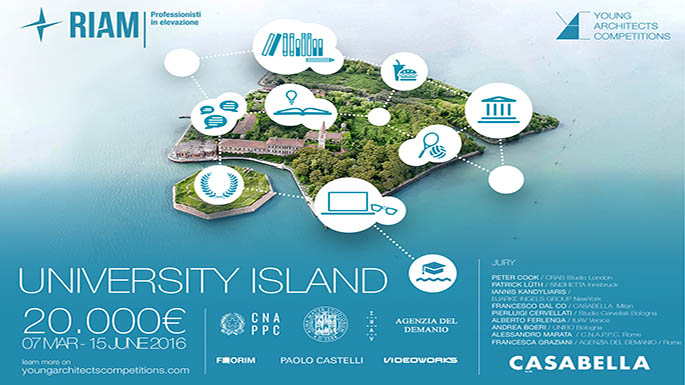