Cluj-Napoca City Hall & Order of Architects in Romania have the pleasure to invite you to a new international contest that aims to create solutions for the improvement of public space in the historical center of the city.

The subject of this contest is Kogălniceanu Street, known for both its religious, historical and cultural variety of the past, but also for the development of an educational network of universities and study centers (Babeş-Bolyai University, Faculty of Theater and Television, the former Jesuit school), colleges and high schools (Emil Racovita, Báthory István, Reformed Theological), as well as the library of the Romanian Academy.

The necessity of this contest comes from the desire to find contemporary solutions for this public space, both in terms of urban mobility and the identity of the street and its long-term potential.

The main objective of the design competition is for the Mayor’s Office of the City of Cluj-Napoca to conclude a contract on the design services required for a good quality development of the public space of street Mihail Kogălniceanu and adjacent streets: Universității, Em. de Martonne, north-south axis made from the streets János Bolyai – Hermann Oberth – Kovács Dezsö, Gaál Gábor and Baba Novac, including Cipariu Square.

Second, attention is also paid to a scenario for the extension of the intervention in the patios of some of the public institutions.

The design competition objective is the finding of a contemporary architectural-urbanistic solution, which should be discreet and reverent in relation to the built heritage, a solution to convert the street M.Kogălniceanu in a high quality, safe, comfortable and adaptable public space. The drafting of a poetic solution is preferable to a project with noticeable decorative aspects.

In the landscape of Cluj, the street Kogălniceanu is one of the most suggestive landscapes for the understanding of the architectural nature of the heritage city. Here we can find the successive layers of its profile, the baroque, neo-classicist, modernist and even brutalist buildings mixed in a genuine palimpsest. This temporal and stylistic mosaic is self-referential – as a true and natural witness of the character of a city whose mark is the diversity recognizable both in the profile and in the structure: ethnical, cultural, professional, etc. The street Kogălniceanu is the concentrated expression of a cosmopolitan city. 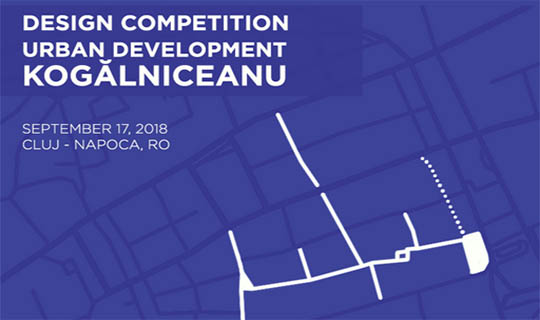