The “WOLFSBURG AWARD for urban vision” intends to add to Wolfsburg’s architectural-cultural dynamism as a model city. Fifty years after the high point of postwar modernism, many individual structures and residential areas are facing the issue of modernization. The principles of the modern city are increasingly called into question. People are looking for models to consider, e.g. for combined forms of mobility as an alternative to cities suited to automobiles or for urban, mixed residential areas offering sustainable energy solutions.

Wolfsburg lies about midway on the east-west axis between Berlin and the Ruhr region. Thanks to an ICE connection and its proximity to the A2 autobahn, this city in Lower Saxony can be reached in an hour from Berlin and a half hour from Hanover, the state capital.

An economically flourishing city, Wolfsburg now has a population of about 125,000, and has added 20,000 jobs in the last seven years. More than 75.000 people commute to Wolfsburg each day.

Newly constructed in its entirety, the city is playing a special, much-watched role and is offering unique opportunities. With its systematically executed idea for a city landscape and outstanding individual examples of architecture, Wolfsburg is perhaps the most important city representing the so-called postwar modernism in Europe. Founded on July 1, 1938, it emerged as a major city by the early 1970s.

The time between 1951 and 1972 is – from a structural standpoint – the most exciting epoch in the development of this new city. The city‘s growth paralleled the Volkswagen plant’s rise from individual auto production facilities to a globally active group with about 570,000 employees at 106 manufacturing locations worldwide.

Influenced by its close interrelationship with economic trends on one hand and with political and social changes on the other, the overall urban planning concepts of the 20th Century emerged in nearly unadulterated form over large expanses. They included models of the garden city from the 1930s, the principle of the “multi-limbed, relaxed city” of the postwar era and finally the ideals of the “Charter of Athens,” which led to the development of the first exurban cities in 1960.

The concept of a decentralized city was implemented – with the currently noticeable consequences for a “urban center.” Nearly pure residential areas were demarcated from one another with extensive green belts and linked by broad transportation axes. The “city fit for the automobile“ was developed here in a pure form.

In a fully new city structure, with practically no “built” models, outstanding individual examples of architecture became points of crystallization. Some of them are among the most important German building monuments of their time. For example, Wolfsburg witnessed the rise of three construction projects by the Finnish architect Alvar Aalto: the Cultural Center at city hall square, the Holy Ghost Community Center and Church of St. Stephen. Designed in 1965, the Wolfsburg Theater at Klieversberg by Hans Scharoun has been described as the little sister of the Berlin Philharmonic. Central figures in Germany’s overall development, such as Friedrich Wilhelm Kraemer, Dieter Oesterlen and Paul Baumgarten have left their mark on the city’s landscape. Beginning in 2000, star architect Zaha Hadid was given the chance to realize her first large museum project: the “phæno” world of experiment, which created a sensation worldwide.

The potential entries are not limited by topic. Their range is defined by the fields of urban and landscape planning, building and industrial construction, building history, historical preservation, structural engineering/structural framework planning, as well as a set of themes: “City Space History.”

There is a desire for contributions that further develop the architectural and urban development qualities of the City of Wolfsburg, works that grapple with the special history of its emergence, and new models for further consideration. Value is placed on innovative or experimental approaches that promise new stimuli. The limits of technology and thinking can be plumbed. Work with interdisciplinary results is especially welcome. 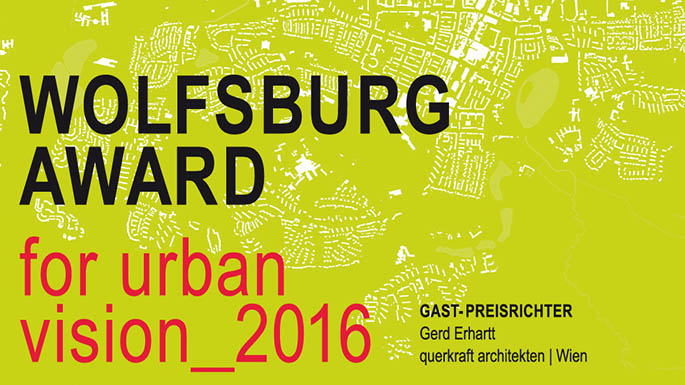