The call for ideas Leisure Harbor was launched on November 2020 by YAC – Young Architects Competitions – in collaboration with BT and Marina di Loano for a restyling of Marina di Loano, one of the most beautiful marinas in Europe. Designers from 70 countries took part in this compelling challenge proposing their concept idea for this tourist harbor needing to re-shape its image and turn into a proper place of the nautical soul and not only nautical infrastructures because harbors are the beginning and the end of the most outstanding adventures.

An outstanding jury panel including Manuel Aires Mateus, PatrickLüth (Snøhetta), Huang Wenjing (OPEN Architecture), Paolo Matteuzzi (Zaha Hadid Architects), among the others, evaluated the project proposals selecting those better responding to the competition’s brief. The winning projects have been awarded with a total cash prize of € 20,000 distributed to the first seven teams ranking. 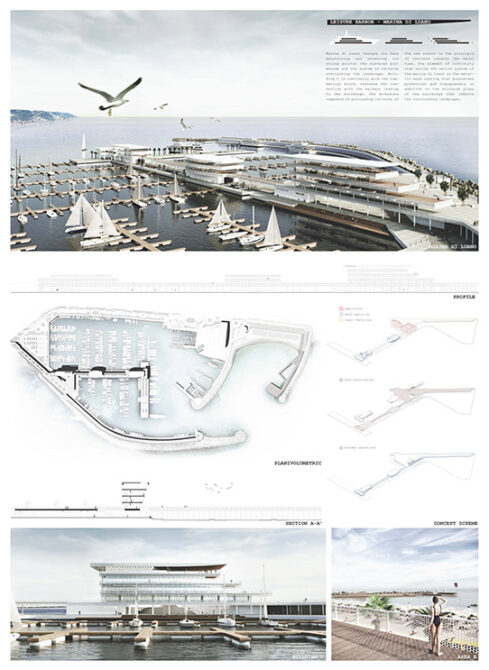 In particular, the Italian team MDarchitetti ranked first and was rewarded with € 10,000. The project was focused on “an element of continuity that unites the entire system of the marina: a metallic mesh coating that guarantees protection and transparency in addition to the mirrored glass of the buildings that reflects the surrounding landscape.”

picture to oneself
Pavlo Babiienko
from Germany 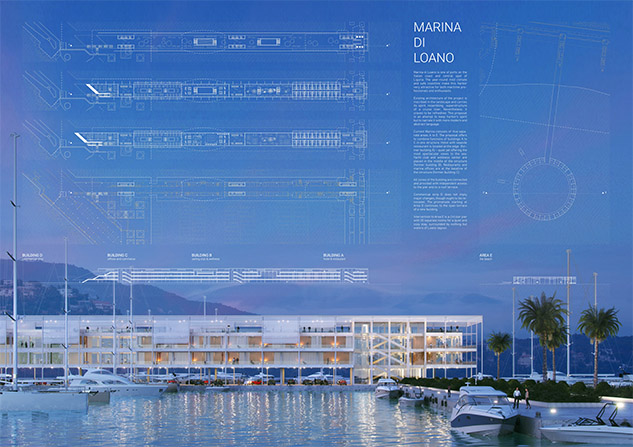 The second prize of € 4,000 was awarded to Pavlo Babiienko with “a concept idea to keep thee harbor’s spirit while narrating it in a modern and abstract language: a connection among all the zones of the building providing them with independent access to the pier and to a roof terrace.” 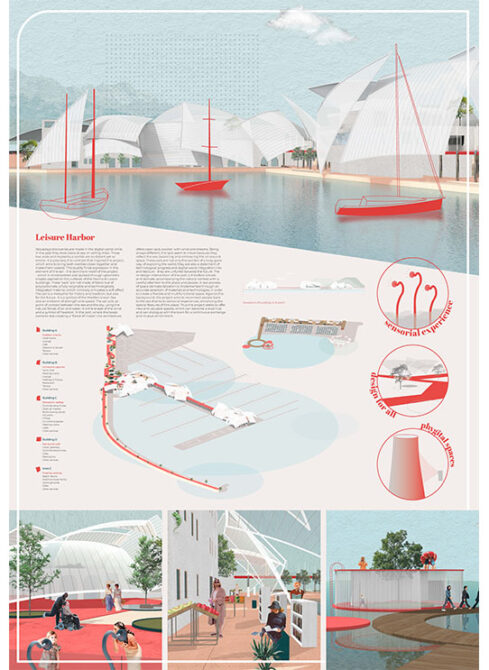 The team rēs design studio from Italy ranked third and won a cash prize of € 2,000 with a project proposal submitted by Veronika Merlin, Michele Corna – “The focus of this project aiming to reconnect people back to the sea thanks to sensorial experiences, enhancing the special features of this place. Thus, the project seeks to offer new and valuable spaces, which can become a local hub and can dialogue with the town for a continuous exchange and mutual enrichment.” 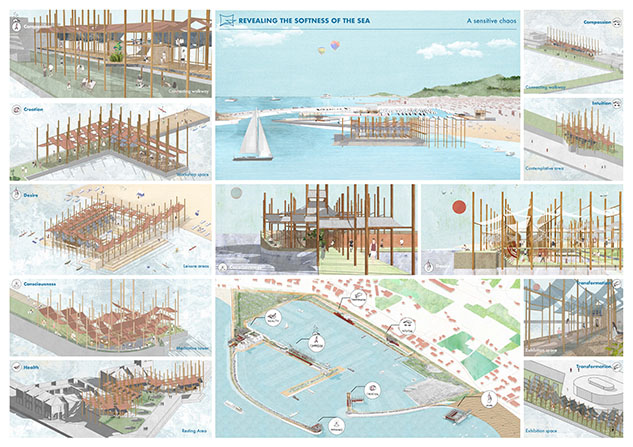 Four Gold Mentions rewarded with € 1,000 each follow in the ranking: the French team COMETLAB proposes “a sail architecture reminding an intimate shelter. Floating thanks to the movements due to the wind, through the more or less filtered light, with the suspended spaces where one can swing, everything gives the impression of being both in the flow of energy and immersed in water. The verticality of the new structures enhances the existing elevated infrastructure.“ 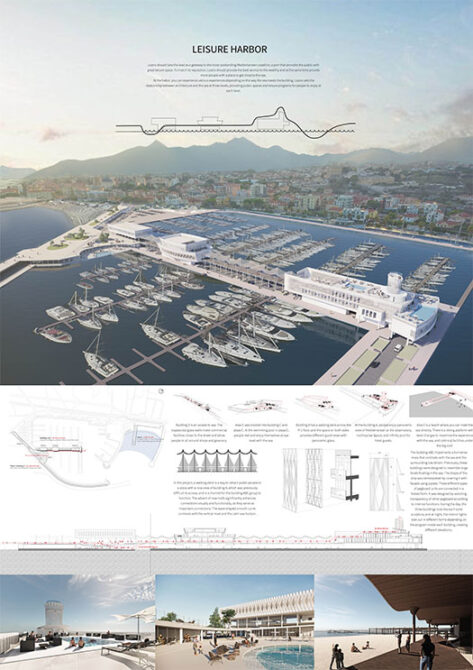 “The shape of the ship was reinterpreted by covering it with façade using a plate. Three different types of pegboard according to internal functions. During the day, the three buildings look like each solid sculpture and, at night, the interior lights leak out in different forms depending on the program inside each building, creating different elevations” – this is the main idea of the project submitted by team 70*3/8 from South Korea, also ranking as a Gold Mention. 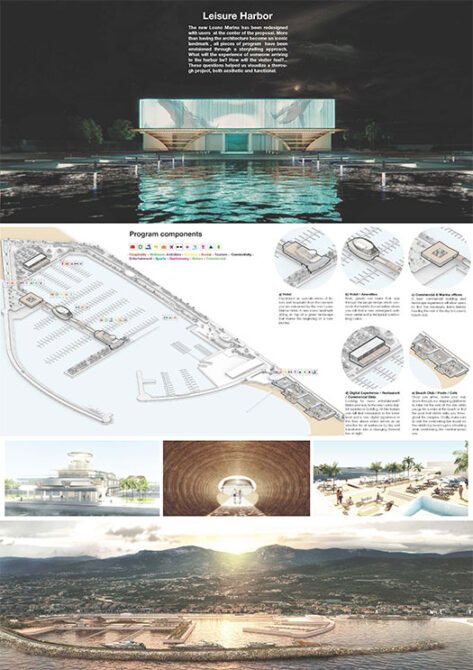 The Mexican team DG rewarded with a Gold Mention proposed a concept “with users at the center. More than having the architecture become an iconic landmark, all pieces of program have been envisioned through a storytelling approach. What will the experience of someone arriving to the harbor be? How will the visitor feel? These questions helped us visualize a thorough project, both aesthetic and functional.” 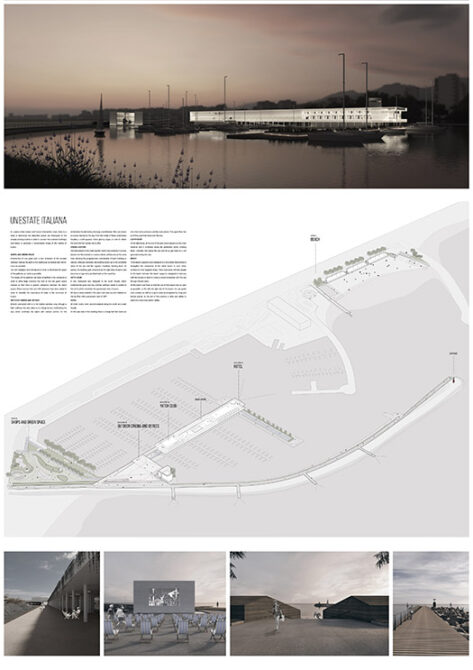 The fourth Gold Mention went to the team Norma studio from Portugal interpreting the harbor “as a place where nature and human intervention meet and where, therefore, there is the need to harmonize the latter. New pieces are introduced on the already existing Marina in order to connect the scattered buildings and generate a consolidated image of Marina di Loano”. 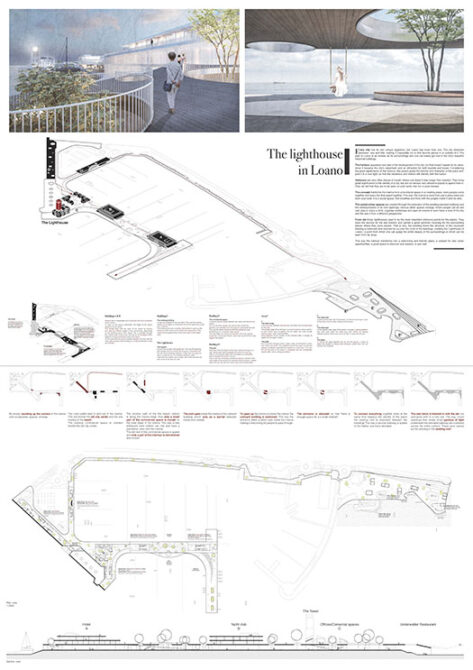 The concept transforms the marina from a functional space in a meeting place, were people come together and enjoy the time spent together. This way, the social-urban spaces are created through the extension of the existing elevated walkway and the reinterpretation of its roof openings, various urban spaces emerge, where people can sit and rest, play or enjoy a drink, organize workshops and open air events or even have a view of the city and the see it from a different perspective. 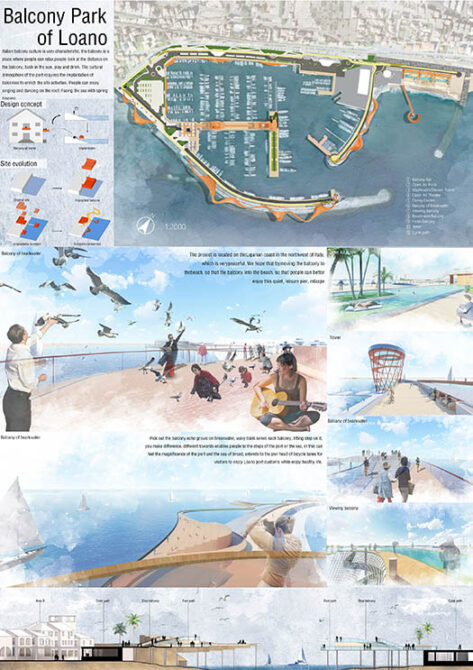 Italian balcony culture is very characteristic, the balcony is a place where people can relax, people look at the distance on the balcony, bask in the sun, play and drink. The cultural atmosphere of the port requires the implementation of balconies to enrich the site activities. People can enjoy singing and dancing on the roof, facing the seat with spring blooms. 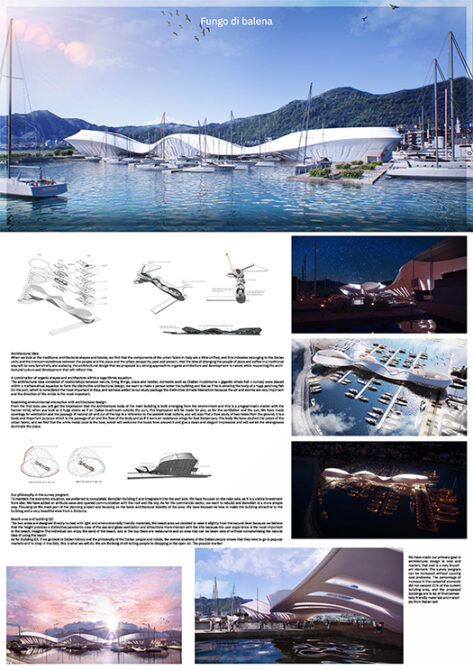 “The architectural idea consisted of relationships between nature, living things, place and habitat, elements such as (Italian mushrooms + gigantic whale fish + curves) we are placed within a mathematical equation to form the distinctive architectural design, we wanted to make a person enter the building and feel as if he is entering the body of a huge perching fish on the port, which is considered the most important in Italy, and we have added it to our study package the distinctive climate interaction because the air in storms are very important and the direction of the wind is the most important.” 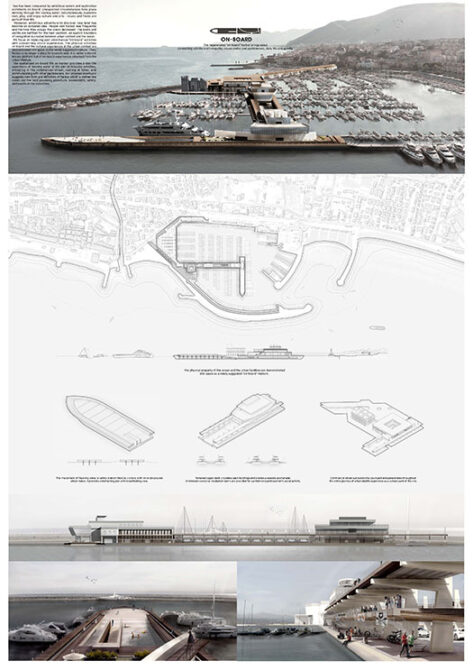 “We focus on replacing past adventurous “on-board” activities with present-day inland experiences. The physical activities on board and the cultural experiences in the urban context are demonstrated into space as the newly suggested mixture. Then, harbor is no longer a place for boats to wait, it is rather a vibrant leisure platform full of on-board experiences inherited from the urban lifestyle. The spatialized on-board life on harbor provides a day-life experience of heaving water at the pier as leisurely activities, shopping in the commercial street, resting at hotel, and communicating with other yachtowners. Our proposal eventually suggests new form and definition of harbor which is neither the ocean nor the land providing adventure, accessibility, safety, and events at the same time.” 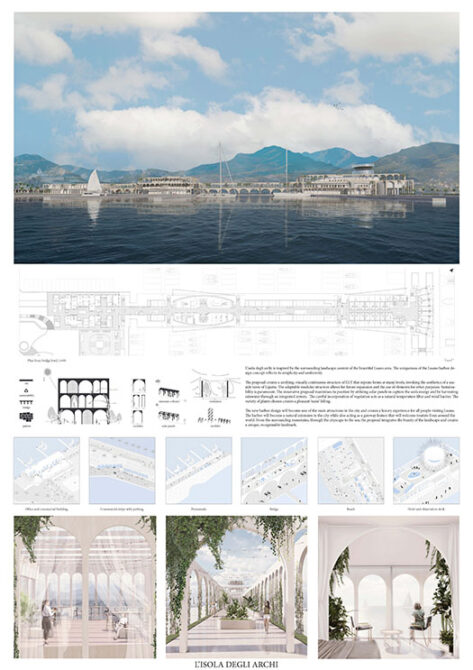 The proposal creates a unifying, visually continuous structure of CLT that repeats forms at many levels, invoking the aesthetics of a seaside town of Liguria. The adaptable modular structure allows for future expansion and the use of elements for other purposes. Sustainability is paramount. The innovative proposal maximizes its position by utilizing solar panels to capture the sun’s energy and by harvesting rainwater through an integrated system. The harbor will become a natural extension to the city while also acting as a gateway feature that will welcome tourists from around the world. From the surrounding mountains, through the cityscape to the sea; the proposal integrates the beauty of the landscape and creates a unique, recognizable landmark. 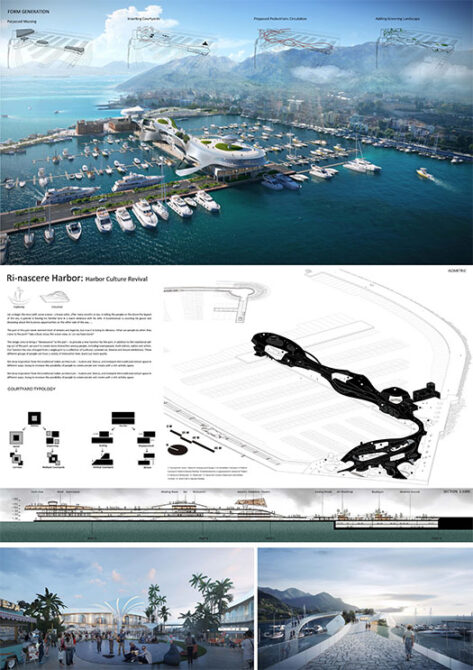 “The design is to bring a renaissance to the port – to provide a new function for the Port, addition to the traditional sailing out of the Port, we want to create more interaction among people, including towns people, Dock visitors, sailors and artists. Our function has also changed from a single port to a collection of cultural, commercial, theater and leisure exhibitions. These different groups of people can have a variety of interaction here, burst out more sparks.” 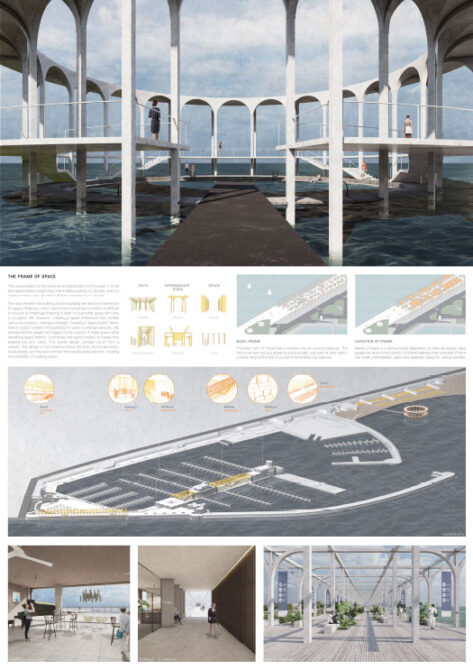 “The leisure harbor is the entrance and destination to the ocean. It is the last space people enjoy the endless scenery of the Sea, end it is a space where they can feel a different scenery from the Sea. The way between the building and the building can also be a framework for space. Walkway, used to be a horizontal circulation, it’s difficult to have an architectural meaning in itself. It’s just a flat space with only a circulation left. Whatever, creating a space framework that creates various encounters, changes will begin. Getting a space frame rather than a space creates the possibility for users to change variously. We attentioned the weight and dignity of the column. Make space while leaving space behind. Good minds with the good scenery to create new experiences and views. The overall design concept came from a column. Design of the column shows arch. Arches or structurally bowl, but they also connect horizontally listed columns, creating the possibility of creating space.” 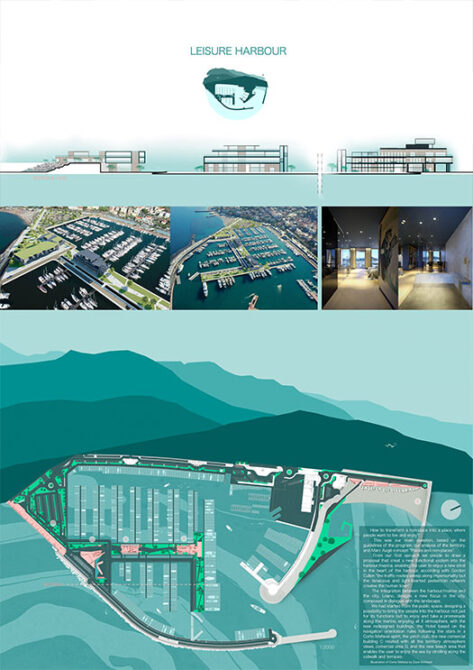 “From our first approach we decided to draw a proposal that creates a new functional system into the harbor, enabling the user to enjoy your new store in the heart of the harbor, according with Gordon Cullen “traffic route sweep along in personality but the tenacious and lighthearted pedestrians networks creates the human town”. The integration between the Harbor and the city, Loano, designs a new focus in the city, composed in dialogue with the landscape.” 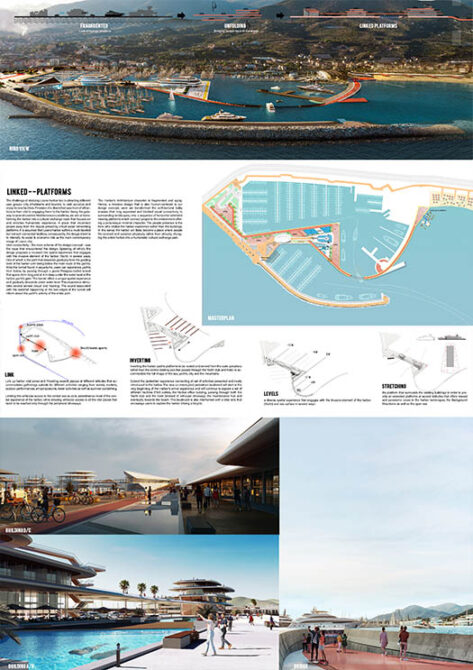 “The harbor’s architecture is fragmented and aging, hence, a timeless design that is also human centered is our design concept, where we transform the architectural bulky masses into a sequence of horizontal extended viewing platforms which connect people to the environment offering a picturesque minimal character. The people presents is the hero who vitalize the Harbor experience rather than the buildings.” 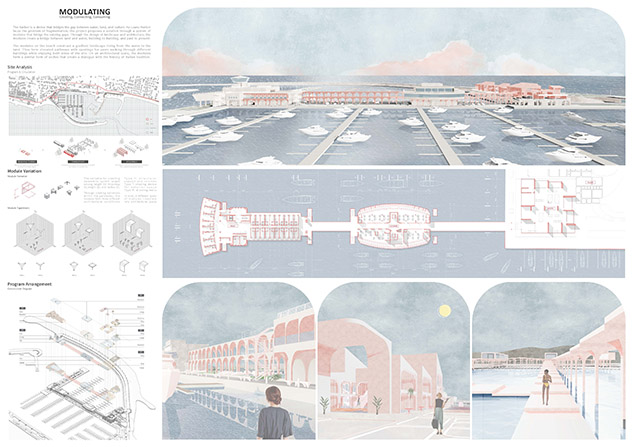 The harbor is a device that bridges the gap between water, land, and culture. As Loano Harbor faces the problem of fragmentation, the project proposes a solution through a system of modules that bridge the existing gaps. Through the design of landscape and architecture, the modules create a bridge between land and water, building to building, and past to present. The modules on the beach construct a gradient landscape rising from the water to the land. They form elevated pathways with openings for users walking through different buildings while enjoying both sides of the site. On an architectural scale, the modules form a similar form of arches that create a dialogue with the history of Italian tradition.

How to make your presentation board stand out? 5 simple tips to improve your architecture panels