Reuse Italy has just announced winners of Piscina Mirabilis Contemporary Art Museum. Those rouins  are a Roman reservoir built by Emperor Augustus in the 1st century AD, in order to feed with drinking water the headquarter of his western Mediterranean war fleet. Participants of this competitions were asked to reuse this space as a Contemporary Art Museum and to bring life back inside one of the most important reservoirs of the ancient world. There was a lot of interesting projects submitted. Below we present all winning entries:

Piscina Mirabilis is a wonderful space, an immense hypostyle hall punctuated by imposing columns; these support vaults which bring light. It is a beautiful container not designed to be inhabited, but to be filled with water. Impressed by the great fascination of the reflections generated by the light that hits the water from above, we tried to find a modern strategy to place at the centre the role played by water in this building.

Thus, the secondary functions are collocated in the two-storey metallic structure, which inserts itself in four perimetral aisles, leaving the main central space to the full-height exhibition room. In the central part, a transparent fabric covers the cistern and shapes its space: light effects are countless and the presence of tie-rods, which sustain the fabric and adjust on the metallic structure, ensure the utmost flexibility. Artworks settle to the bottom, like debris on the seabed, and visitors can “float” at various heights and deeply experience the works and the cistern itself. In this way, visitors come to know the cistern from different heights and the individual spaces can be opened for night events. The roof is the most “informal” part, where the museum faces the context, arousing amazement and making the museum visible from afar.

On the Roman ruin there are two super modern large-screen displays which indicate the current exhibition, the weather forecast and at night it can become an open-air cinema; the antenna is a meteorological station which shows the turnout (so that those who are in Bacoli can get organized in order to avoid queues and gatherings). The square can be used for conferences, cinema projection and parties, thanks to the semicircular pavilion in which bars and restrooms are located. 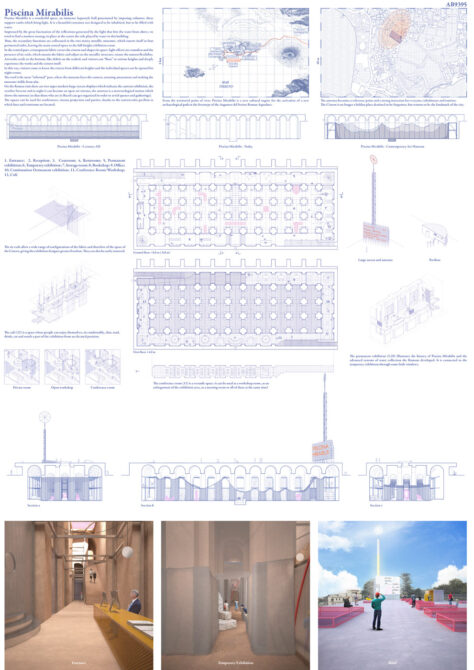 Isotropy and flexibility. The exhibition itinerary of the new museum Piscina Mirabilis develops without providing a monodirectional path, preferring instead a visual, spatial and movement experience in every direction. This project has been developed with the intent to preserve the original spaces and proportions of the ancient Roman cistern.

The sole internal volume is a large wooden staircase, which allows the viewer to observe the cistern and the exhibition from multiple viewpoints. The light-coloured stone interior flooring is designed to include a modular system that can accommodate the various devices used for the exhibition. The rest of the project is developed outdoor, and it is based on four main items: a tower-mirador, a large public square, a bar-restaurant, and a bookshop. The tower demarcates the intersection where the entrance to the museum is located and acts as a visual and signalling landmark. On the inside-at the street level-the tower encapsulates the reception and a small office. The summit of the tower can be comfortably accessed from the entrance situated at the terrace level and allows the visitor to take advantage of the breath-taking panoramic view of Golfo di Pozzuoli and Vesuvius.

The large public square is placed above the cistern’s roof. The pavement is partially lifted to ensure that the Roman remains underneath be fully preserved. The square grid flooring is developed to perfectly match the modules of the pillars and the skylights beneath. This warp creates a chessboard of glass panels, placed over the skylights, and wooden panels, placed over the structural part of the cistern. This ensures visual continuity between the square and the museum below and proper natural lighting for the exhibition. 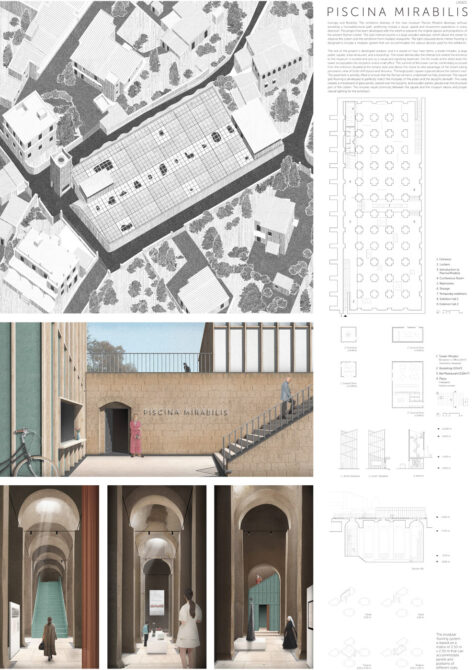 The approach to an architecture like this one must be based on respecting its memory as a ‘laica basilica’. Piscina Mirabilis is a monumental roman project that doesn’t need any superfetation. The functionalization of this space starts with the recovery of the element that represents its root, the water. The aim is to quietly insert the project, restoring and respecting the original beauty and function of Piscina Mirabilis, both inside and outside the cistern area. Suddenly, the sensory aspect takes place instead of the form, through the installation of full-height mirrors, between the 10th arches row from the main entry, which splits the exposition area from the supporting space and gives the visitors the impression of witnessing an ‘untouched basilica’, reflecting the space in front of it. Besides, the conquer of its height to appreciate the importance of the structure at different levels becomes the second main protagonist.

The contemporary art exhibition is entirely visitable by a pattern of paths surrounded by the water, that recover and point out the directional development of the space. The operas are always set in different ways using the natural peculiarity that the several conditions this place offers. The echo, the falling drops sound onto the water, the strips of natural light are used as an element in support of the artifacts and method to lead the visitor through the exhibition. The central path represents the pivot of this organism. At its left end, the visitor is attracted by the glow that comes from a mirror-cladding box (with a terrace on top) where the low light level creates an emotional environment for the glowing masterpieces of artists such as Dan Flavin. Continuing along the leading path, approximately at the middle point of the system, where the change of the water depth takes place ( know as ‘Piscina Limaria’ ) the visitor is invited by this alteration to stop and follow the transversal direction ( the Basilica’s ‘transetto’ ) to observe free-standing operas, like the Edoardo Tresoldi’s statues, placed on four islands and on the central exedra. Just before the passage through the mirrored surface, the paths are re-connected by a transversal one which leads to the longitudinal walls, where delicate supports find their place between the columns, to locate the operas. Beyond the mirror, an additional core element of the project takes place, the spiral stair. This one, built into the biggest existing hole, links the 3 levels ( lower, middle, upper/outdoor) and turn into a ‘shy tower’ when it pops out from the indoor area.

A panoramic terrace sits on top of the staircase, becoming an observatory point to admire the surrounding . In this second area, the bathrooms and the storage area take place, as well as the conference space, interpreted as an ancient theatre where people can sit on the ‘klimakes’. The core of this second part of the building is the ‘fonte’, a double-height space, used as a bookshop, where also the people on the first floor can look at. The first-floor hosts the administration office and the bar / restaurant, whose accessibility is independent of the exposition area and guaranteed by the spriral stair at the garden level. The external surface retains the existing central holes to bright the corresponding path at the museum level.

These ones are collected into a pool and are often provided with protections that prevent the water to fall into them and, in some strategical points, left protection-free to create an atmospherical waterfall into the space below. The upper level is mostly used as space open to the public and represents that element that completes a green belt made of the wood area at South- East and the ‘Villa Comunale’ at North-West. The light metal structure with a growing-vegetation on it, that follows the location of the existing coloums underneath, is used to create a natural corridor to provide shades to the visitors and a clear path to entry into the restaurant, theatre and the spaces below. A project created to preserve, not to change or astound. 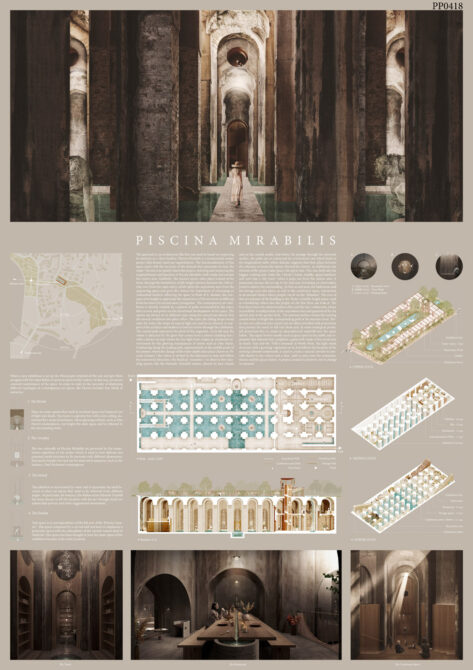 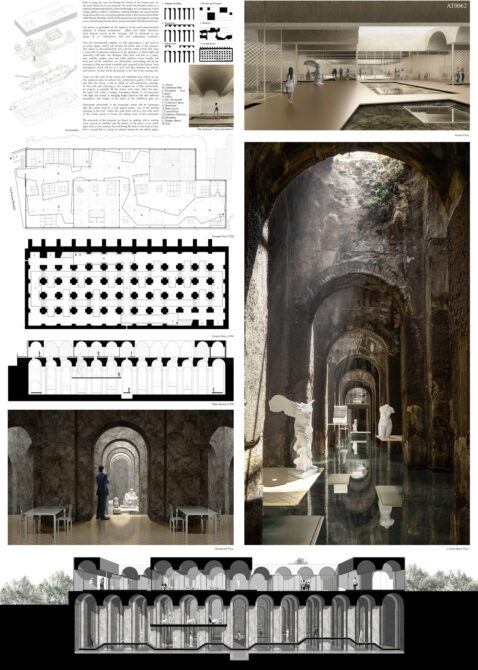 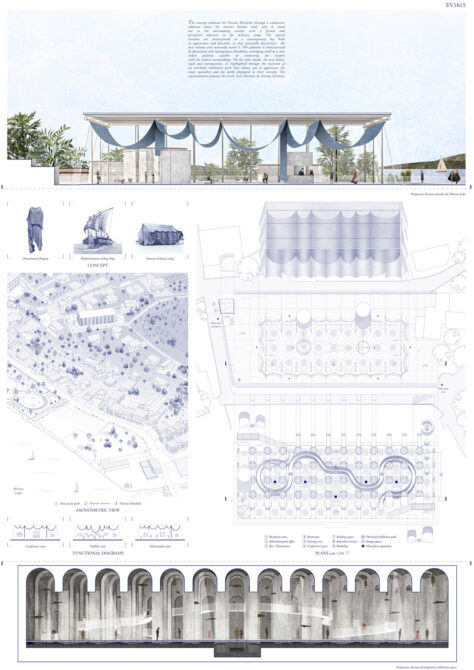 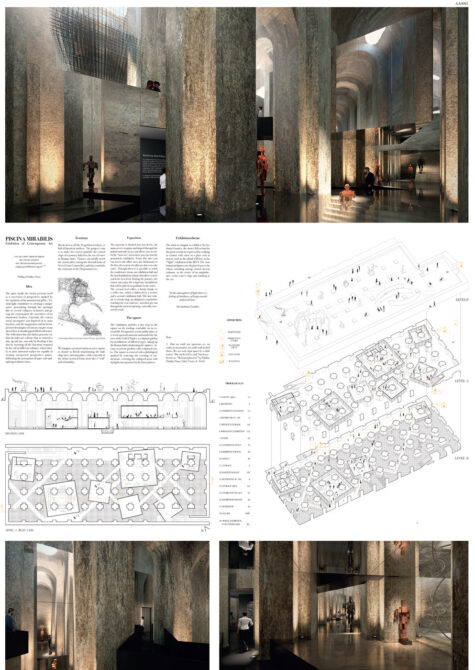 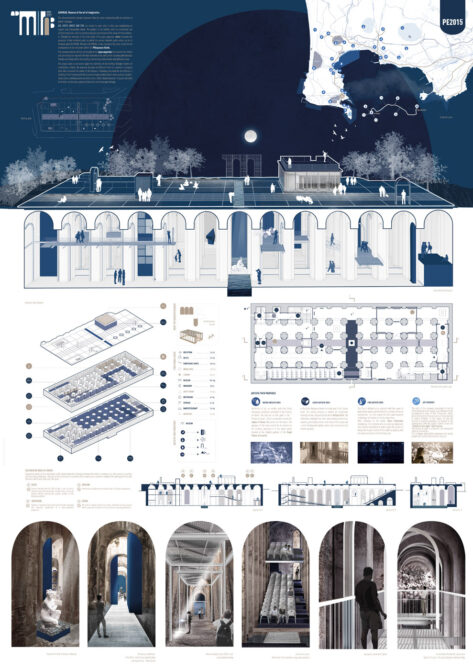 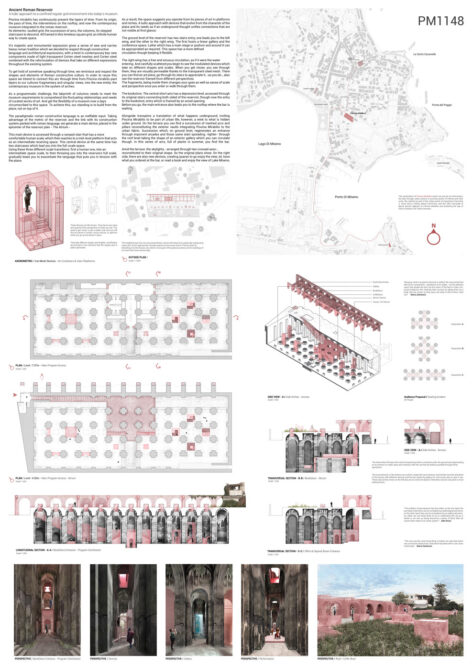 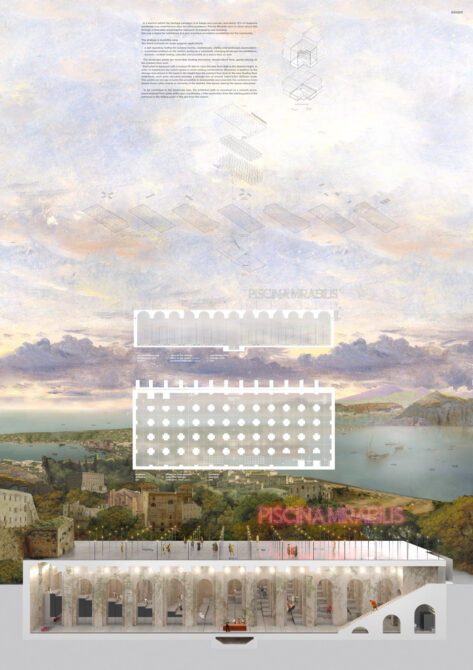 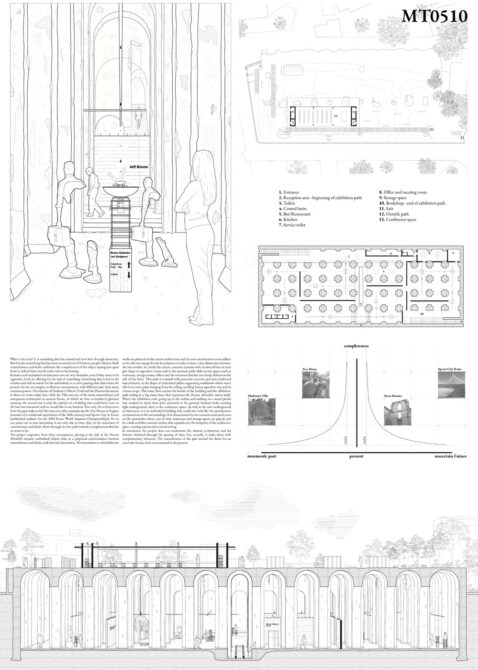