CIU HABITAT invites designers to submit proposals that compete for the solution of three real problems of the Ecuadorian popular habitat. Which are: for item 1, human settlements in mangrove ecosystems in the Gulf of Guayaquil; for item 2, the settlements located in areas of vulnerability and risk in the vicinity of the Tungurahua volcano; and item 3, housing solutions in marginal urban settlements with precarious levels in Guayaquil’s Estero Salado.

The MIDUVI and the Ecuadorian Architecture Association (CAE-P), as part of the national preparation process for Habitat III, invite the world’s academic community to assemble interdisciplinary teams to be a part of this pedagogical academic process. Such teams can consist of designers, urban planners, ecologists, environmentalists, biologists, scientists, specialists in risk and disaster management, students and professors of Architecture and Urbanism schools and universities. The teams will develop preliminary design proposals to solve three current issues of the Ecuadorian popular habitat: human settlements with environmental degradation, vulnerable settlements in risk due to volcanic activity, and highly marginal and precarious urban settlements.

Habitat III presents an opportunity to consider real and specific cases that imply difficult solving challenges, in a creative way with academic innovation. The objective is to obtain technical and conceptual contributions that allow to rethink existing interventions and generate elements that help improve the creation process of housing and public habitat policies in Ecuador. A pragmatic case study

for each problematic has been selected with the objective that the solutions of design and planning created for each case can be adapted or replicated in equivalent situations in Ecuador as well as other regions of the world.

The CIUHABITAT Competition Committee will have a Jury of 5 national and international members, 2 national and 3 foreign for each theme of the competition.

The academic community through universities around the world that have colleges or schools of Architecture, Planning, Design, Urban Planning, Geography, and other fields related to the issues of competition. These institutions can participate though their faculty that lead interdisciplinary teams made up of students who should be in the final two years of their majors.

Two members of each winning team for each theme of the competition will be invited to present in Quito, throughout the Habitat III activities. All participating proposals in the contest will be uploaded to the official website.

For each of the 3 themes of the contest, the Jury will select amongst all participant teams three finalists without any particular order. The jury will afterwards, select one winner out of the finalists.

The designation of awards in the competition does not imply any commitment on behalf of the promoter or organizing institution with the author or team members for the execution of the proposals. Neither with the teams that obtain the second place and third place or any awarded proposals.

As testimony of the Habitat conference, the promoting institution, MIDUVI will sponsor a publication that will gather the most important features of the conference and the most outstanding aspects of the contest for every theme. The publication will be sent to all Universities, Schools and teams that participate in the Academic International Contest of Preliminary Projects.

This requirements are established to recognize the participation of the teams according to the academic nature of the contest and also to allow the Jury committees to evaluate the proposals by providing all the necessary information. The Contest’s Technical Secretariat (STC) will present a report qualifying the suitability of the participants preceding the process of evaluation by the Jury. 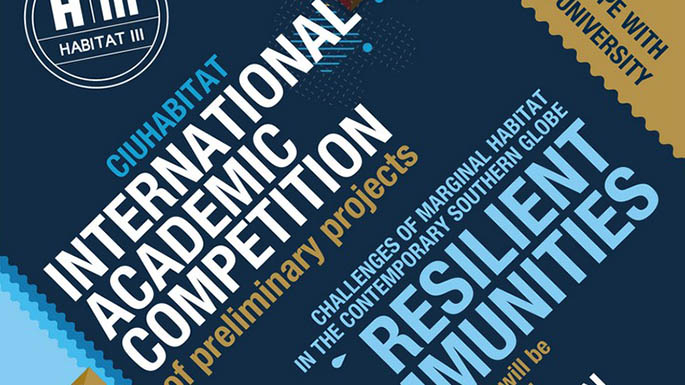