The Award for Architectural Heritage Intervention AADIPA, arises from the belief that heritage, as a vehicle for social integration and an economic vitalizing resource for the community, deserves to be appreciated and encouraged.

In the current context, in which architectural heritage is considered not only to be a fundamental instrument of knowledge but also a first rate socio-economic resource for the sustainable development of the territory, the disclosure, distinction and recognition of works and quality projects contributing to the preservation of the collective memory is imperative.

With this third call, the registration period for which is open from December 2016 to April 14, 2017 at 24:00, the contest aims to consolidate itself as a catalyst and observatory of new challenges added to the conservation and intervention in built heritage by the globalization of contemporary architecture. All those experts involved in the interdisciplinary heritage value chain -architects, historians, archaeologists…-, can participate in a contest that will end with the awards ceremony taking place in June 2017 in the city of Barcelona within the framework of the International Biennial of Architectural Heritage that is organized with the support of COAC, AADIPA and the Government of Catalonia.

The call is divided into four categories:

Category B: Exterior spaces
All interventions in the historic public space, in monumental and cultural landscape environments.

Category D: Disclosure
Those initiatives, activities and actions that are aimed at disseminating the values of architectural heritage.

And as a requirement, all entries submitted must have been completed, carried out or published in the European geographical area and within the period from January 1st, 2010 to December 31st, 2016.

The winners will be awarded a framed reproduction of an original photograph by Francesc Català Roca and finalists, a diploma of merit. The winning entries, finalists and submitted works will be part of the catalogue published for each issue to document the event.

Moreover, coinciding with the opening of registration, the organizing committee of the Awardannounces the publication of an international file on Heritage. A window to showcase all the works presented in the competition, as well as other interventions selected by a scientific committee of experts, which respond to criteria of good practice in the heritage field. An open file, which can be consulted on the web page of the award, aspiring to become a documentary benchmark on the state of affairs regarding European heritage intervention.

The European Award for Architectural Heritage Intervention AADIPA, led by Ramon Calonge, Oriol Cusidó, Marc Manzano, and Jordi Portal, architect members of the group AADIPA, in its first edition, held in 2013, saw 200 team projects being presented from 8 countries, while in its second edition, held in 2015, it revalidated the number of works submitted and quadrupled international participation, with the number of affiliated countries increasing to 26. 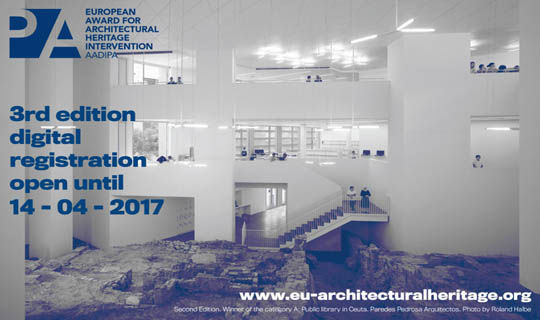