The call for ideas ARCTIC HOTEL was launched on April 2021 by YAC – Young Architects Competitions – for the design of accommodation facilities combining hospitality and unspoilt nature and offering a unique experience for the observation of the Aurora Borealis.

Capital of Finnish Lapland, Rovaniemi is one of the few cities in the world located at a few kilometres from the Arctic Circle: legacy of people with colourful clothes and special traditions, reindeer farmers and sleigh builders. Rovaniemi is a place made of snow, perpetual dawns and dusks, and it is home to the dancing lights that shine in the sky during cold winter nights – the Aurora Borealis. Home to Santa Claus- the Scandinavian myth that conquered the world through tales and folklore, the town of Rovaniemi had been considered inaccessible and remote for most of its history. Until last century, when it became the destination for visitors and tourists, who wanted to feel its magic and see the fascinating Northern Lights. Today Rovaniemi is no longer a prerogative of expert travellers and explorers, and new hospitality models are necessary in order to protect the remote identity of this land. An identity that is characterized by primitive beauty and harmony, and inaccessibility and the absence of humans greatly contributed to its shaping.

On Ounasvaara Hill, overlooking one of the most remote bases ever built, architects will have the opportunity to imagine a structure that blends with the forest, the snow and the sky. A place where visitors can find shelter from the freezing temperatures of the Arctic Circle, gather around a fire, and enjoy the rarest and most mysterious spectacle of nature: the Aurora Borealis. 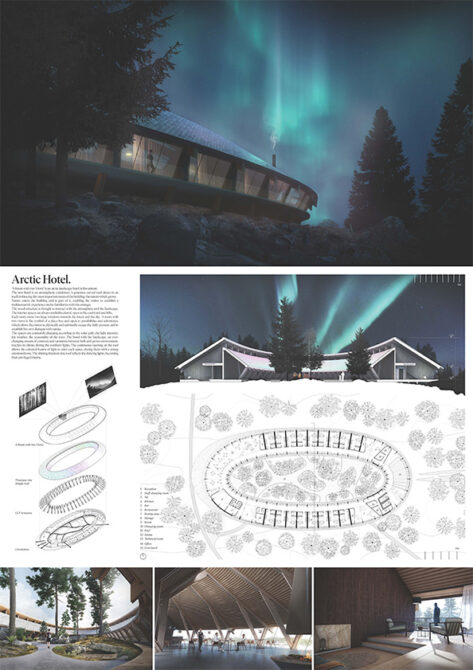 The Italian team OpenAgenda ranked first and was rewarded with € 8,000. The project was made by Alessandro Perri and Andrea Granieri; their proposal for the new hotel is  an atmospheric condenser. A generous curved roof closes in on itself embracing the most important room of the building: the nature which grows. Nature enters the building and is part of it, enabling the visitor to establish a multisensorial experience and to familiarize with the stranger. The wood structure is thought to interact with the atmosphere and the landscape. The interior spaces are always multidirectional, open to the courtyard and hills. Each room owns two large windows towards the forest and the sky. A room with two views is the symbol of a place free and open to possibilities and adventures, which allows the visitor to physically and spiritually escape the daily pressure and to establish his own dialogue with nature. The spaces are constantly changing according to the solar path, the light intensity, the weather, the seasonality of the trees. The bond with the landscape, an everchanging stream of contrasts and variations between built and grown environment, reaches its climax during the northern lights. The continuous opening on the roof allows the coloured beams of light to enter each space, dyeing them with a strong emotional tone. The shining titanium zinc roof reflects the dancing lights, becoming their privileged theater. 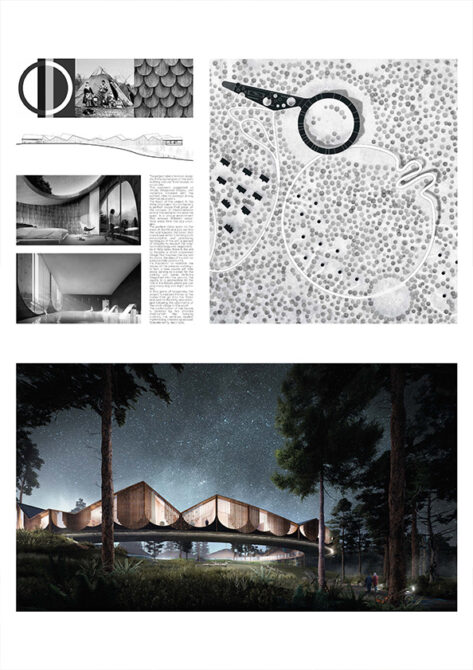 The second prize of € 4,000 was awarded to the team I.P.A. made by Mattia Bergamo and Nicolò Martin with a project that stems from an analysis of the archetypes of the Sami building culture: from houses to sculptures. This approach suggested us simple, integrated shapes, and materials coherent with the context, able to undergo strong thermal excursions. The heart of the project is the RARe (Rovaniemi Aurora Resort), a perfect shape that plays on the concept of interior-exterior and on the desire to immerse the guest in a unique environment that arouses different sensations every time the day changes. The perfect circle leans on the crest of the hill and juts out into the void towards the forest that is enclosed within it, limiting both consumption and processing techniques of the soil, a gesture of integrity to respect the original morphology and vegetation. As in fairy tales, there is the will to imagine a small suspended village that touches the sky and its colors, the idea of tourism as a responsible community. It’s important to maintain the traces of the previous building – in fact, a new square will take place, serving as a cover for the parking lots below. Perfectly integrated into the ground, the square is a promenade to the Hall of the Resort, where you can play many day and night activities. In this game of tangencies, the project is realized thanks to the routes that go into the forest and lead to the lofts, also arranged following the alignments of the small village to the south. The conformation of the façade is dictated by the binomial shell-curtain: like hanging curtains, the windows develop rhythmically, shielded by wooden flake elements, like a bark. 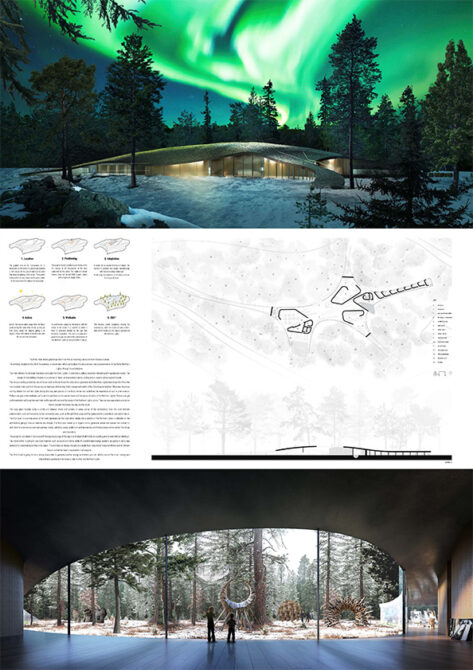 The team UNIAG including Domenico Falci, Michele  Piccolo, Antonio Carmisano won the 3rd prize of € 2,000 ; their idea was greatly inspired by the surrounding nature and from the local culture. The building, located on the hill of Ounasvaara, is a landmark, which symbolizes the extraordinary natural phenomenon of the Arctic Northern Lights, through its architecture. The hotel reflects the ethereal, transitory and poetic Northern Lights. It looks like a solitary sculpture interacting with spectacular nature. The design of the building is based on a contrast of ideas: an impressive material roofing and an organic ad transparent facade. The sinuous roofing eroded by natural forces such as the wind and the solar action generated by the Northern Lights takes inspiration from the monumental rocks and from the vernacular dwellings of the halde, that is benevolent spirits of the Scandinavian tradition. Moreover, the stone roofing reflects the northern lights during the long dark periods of the Arctic winter and underlines the experience of such a phenomenon. Visitors can get on the walkable roof to admire and listen to the sacred forest and the dance of colors of the Northern Lights. Visitors can get on the walkable roof to admire and listen to the sacred forest and the dance of the Northern Lights colors. They can also appreciate a structure that is one with the forest, the sky and the snow. The large glass facades allow a continuum between inside and outside. In every corner of the architecture, from the most intimate environments ,such as the rooms, to the community ones ,such as the exhibition areas and the restaurant, it is possible to connect to nature. The floor plan is a consequence of the flows generated by the solar wind. Ideally, the projection of the Northern Lights is reflected on the architecture, giving it sinuous features and shapes. The floor plan ,made up of organic forms, generates places and spaces that connect to each other in a harmonious and sensual way. Inside, exhibition areas, auditorium and laboratories are the ideal places where artists find refuge and inspiration. The project is conceived in harmony with the typical ecology of the region and adapts itself to the surrounding environment without altering it. The construction is going to use local materials such as wood and stone, while its sophisticated energy systems are going to set a new standard for sustainable planning in the region. The architectural design, thought on a single floor, reduces the impact of wind and other climatic factors so that the hotel is accessible in all seasons. The Artic hotel is going to be a unique place able to generate positive energy and where you can admire one of the most moving and indescribable spectacles that nature is able to offer: the Northern Lights.

Two Gold Mentions rewarded with € 500 each follow in the ranking: the Italian teams Matteo Foresti and fragment. 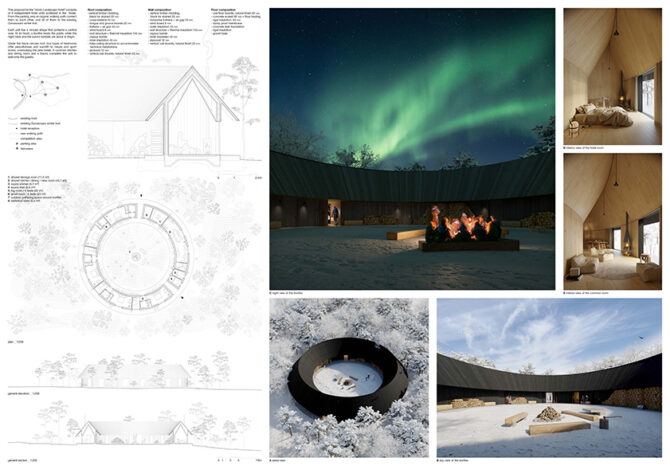 The proposal submitted by the first one consists of 3 independent hotel units scattered in the forest. From the parking area an organic walking path connect them to each other, and all of them to the existing Ounasvaara winter trail. Each unit has a circular shape that protects a central void. At its heart, a bonfire heats the public while the night rises and the aurora borealis are about to begin. Under the black circular roof, two types of bedrooms offer peacefulness and warmth to nature and sport lovers, overlooking the pine forest. A common kitchen and dining room and a Sauna complete the unit to welcome the guests. 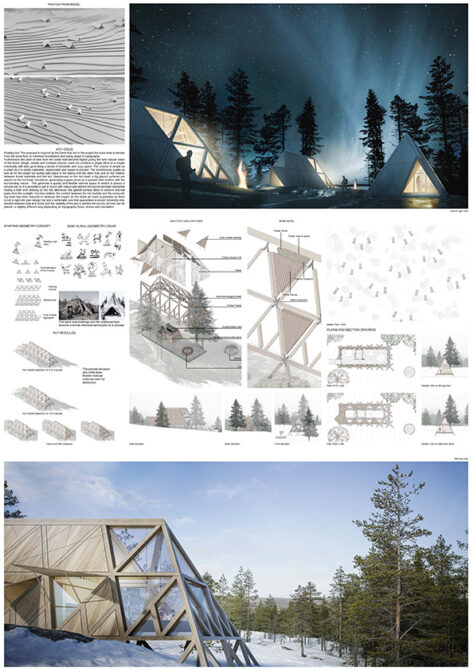 On the other hand, the team fragment submitted a Floating hut: The proposal is inspired by the Sami huts but in the project the main level is elevate from the wood floor to minimize foundations and easily adapt to topography. Furthermore the point of view from the inside huts become higher giving the best natural vision of the forest. Single, simple and compact volume: each hut contains a single client or a couple eventually with kids generating a sense of domestic and cosy space. The volume is simple as a prism so it is easily replicable, replaceable and easier to precast. The architectural quality as well as for the single hut quality take place in the dialog whit the other huts and on the relation between forest materials and the hut. Glasshouse on the hut head: a big glazed surfaces are placed on the hut head elevations generating a glaze prism as a space in total relation with the surrounding nature. This generate a quality and flexible internal space in which is placed a circular tub so it is possible to get in touch with nature and admire the aurora borealis meanwhile having a bath and relaxing on the tub. Moreover this glazed surface allow to achieve thermal gains from the sunlight. Hut-tree relation: the contact between the hut module and the surrounding trees has been reduced to minimize the impact on the forest as much is possible so there is not a rigid site plan design but just a schematic one that guarantees a proper interesting relationship between huts and forest and the visibility of the sky to admire the aurora. All huts can be placed i a slightly different way depending on topography, trees, stones and orientation. 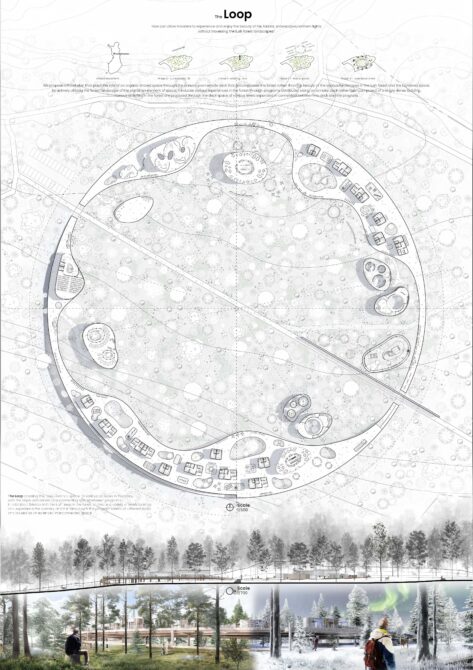 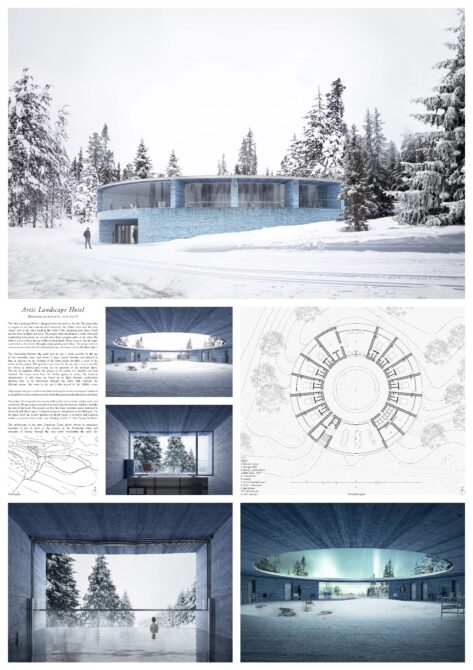 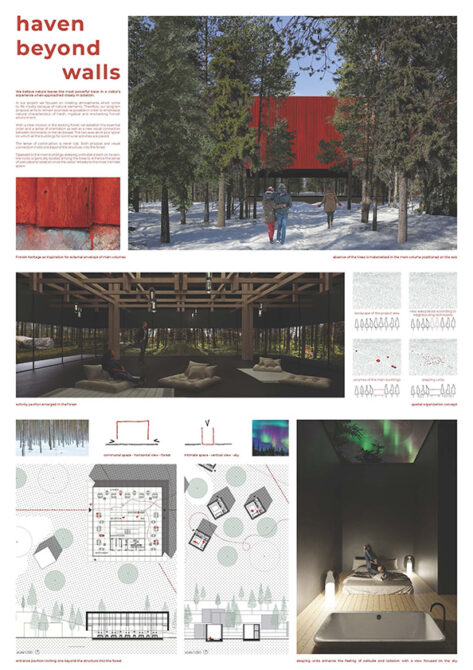 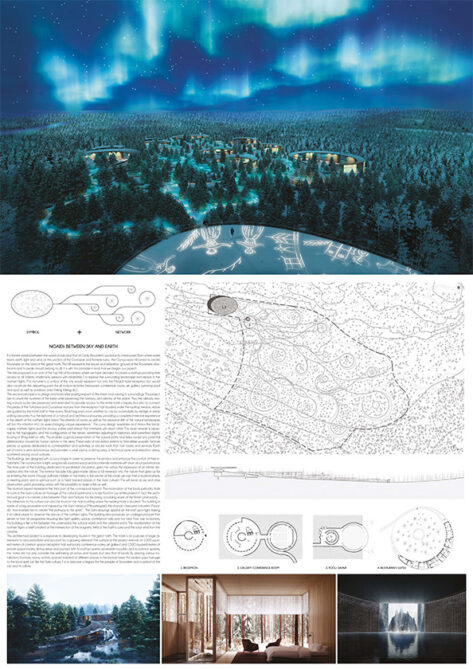 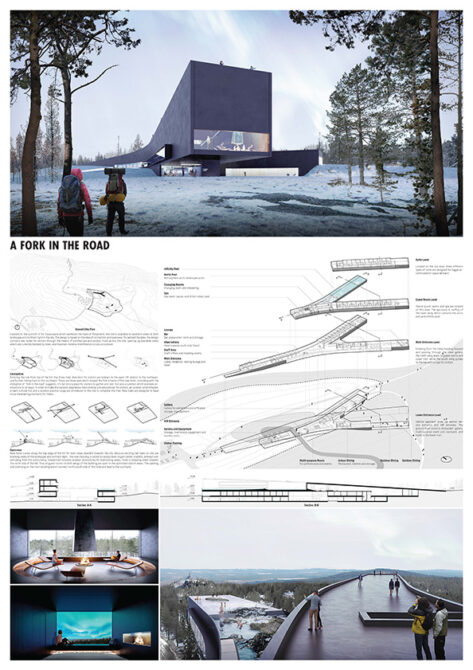 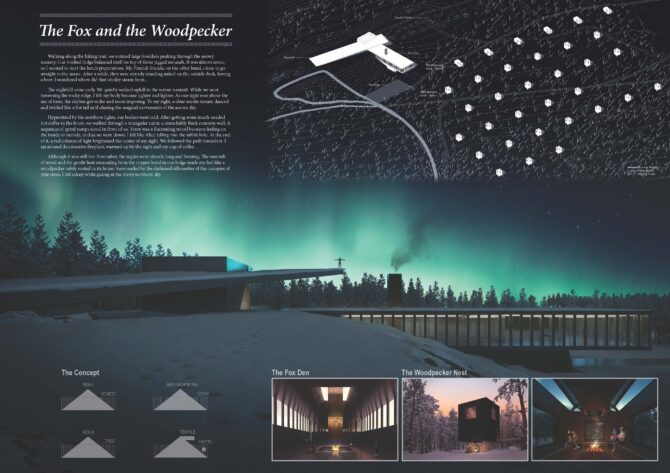 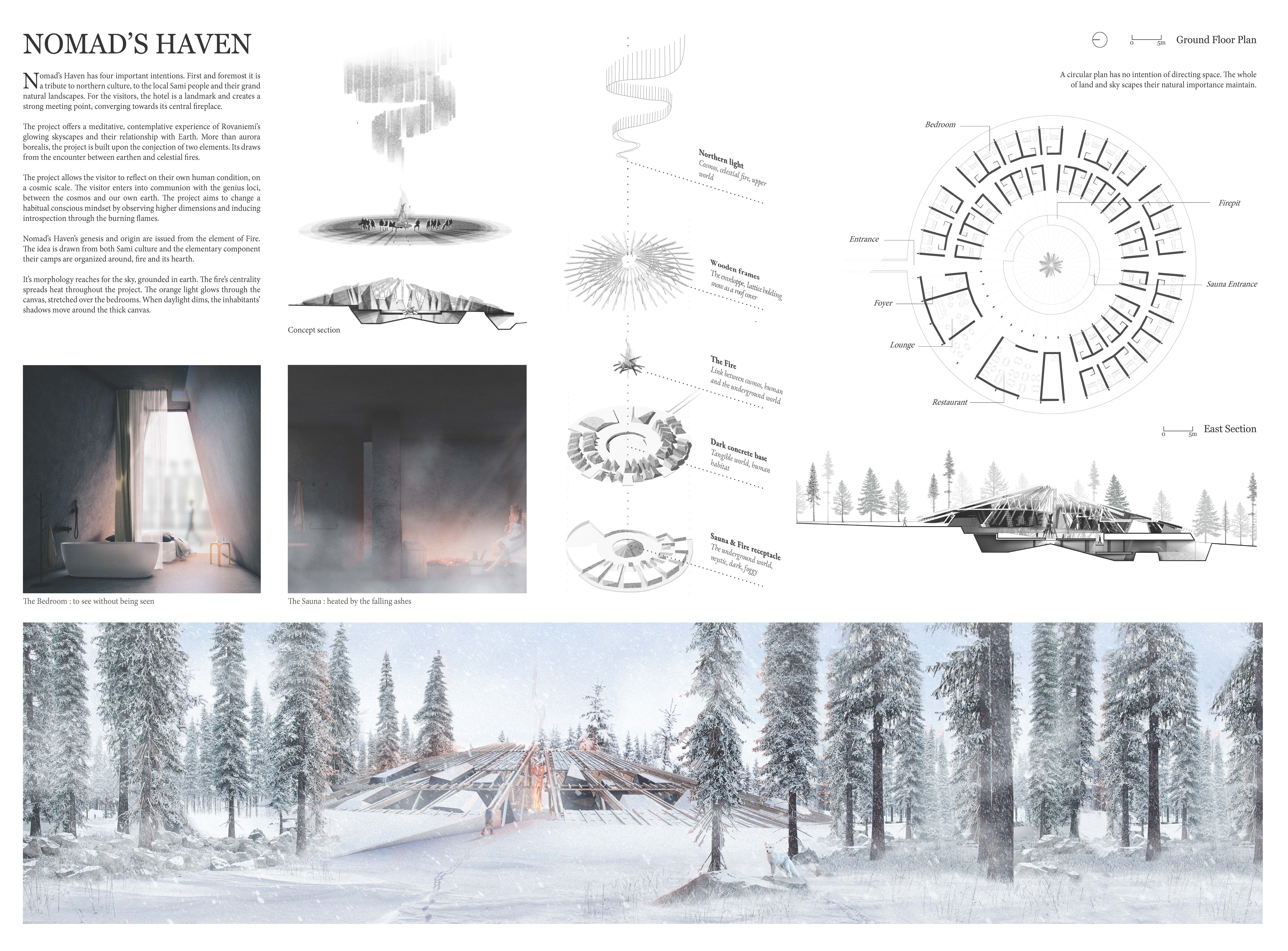 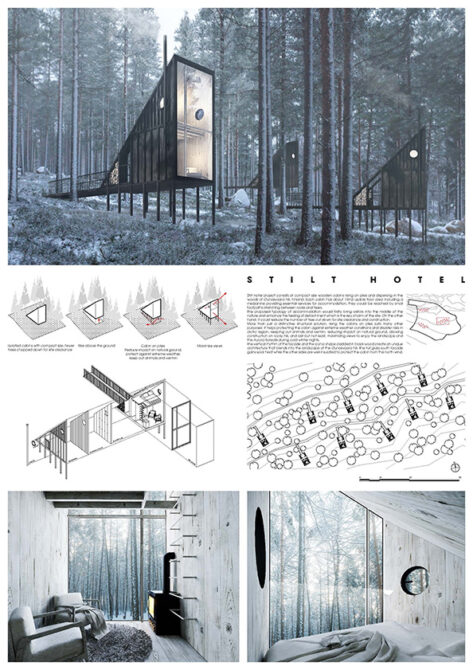 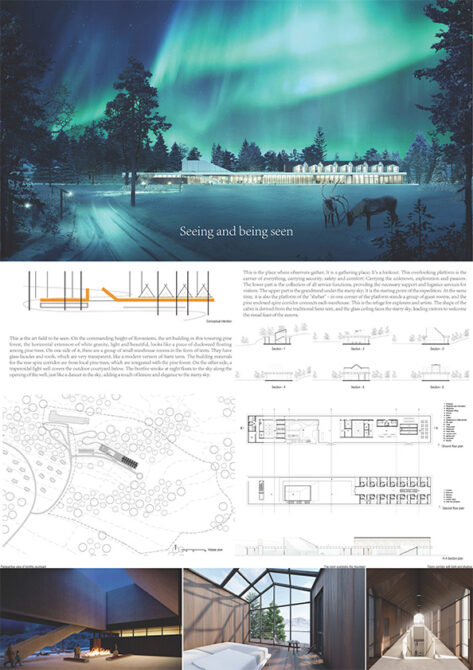 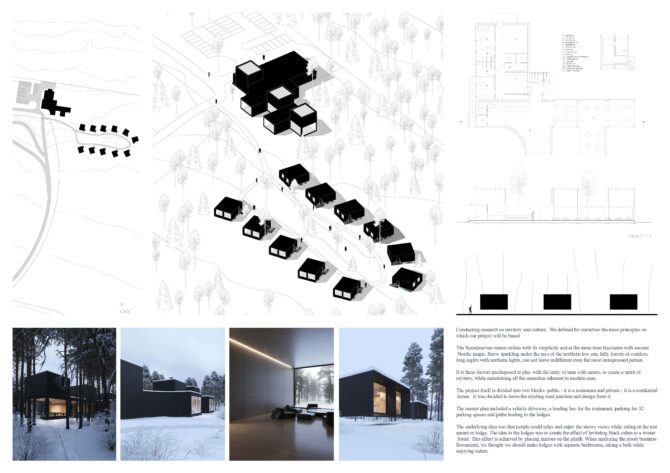