Riga Black Balsam is an iconic traditional Latvian drink, created from a combination of 24 ingredients, including herbs, roots, berries, and fruit juices. Its smooth and versatile taste can be enjoyed any number of ways, though it is often taken neat, or mixed into a cocktail of choice. More and more lately, younger audiences have begun to recognize that Black Balsam is great when mixed into cocktails.

In an attempt to further entice the younger fan base, the traditional Latvian liquor is launching the Black Balsam Laboratories competition, in which cocktail “workstations” would be situated in numerous locations around the world. The laboratories would need to accommodate one workstation for the bartender, as well as an area where visitors would be invited to mix and experiment in order to create their own Balsam-based cocktails.

The structure itself would need to be easily assembled and disassembled, and all of its parts should fit into one standard container to allow for easy transport. The design of the laboratories should integrate both the old and the new; combining the century-long traditions of Black Balsam with the innovations of modern cocktails.

The Black Balsam Laboratories should be a place for audiences to learn about Balsam’s history, while at the same time recognizing the new and bold qualities of it as a cocktail ingredient, encouraging fans to see the beverage in a different light.

Riga Black Balsam have expressed an intent to develop the structure in the future.

3 winning proposals + 2 special award recipients and 6 honourable mentions will be selected. Bee Breeders will award a total of US $6,000 in prize money to competition winners as follows:

More information about the special awards at BALSAMLABORATORY.beebreeders.com. 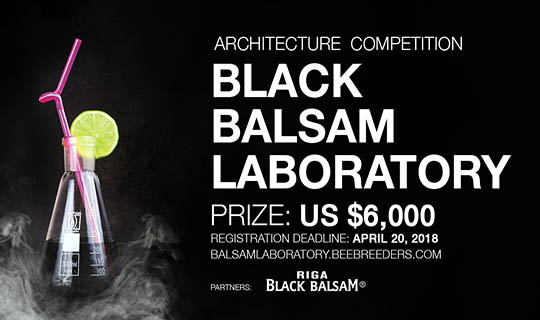