With this text, we continue series of articles on Competitions.archi. We will be showcasing the case studies of the projects that were awarded in various architecture competitions. Today’s article is about winners of  Senegal Elementary School Competition organized by Archstorming.

The main focus of this series is to understand the design process behind all winning submissions. That is why we will be asking all architects and designers ‘ How you won that competition? ‘. We’re curious about their path, from the first draft, the first blueprint to the full-scale plan. We’re also interested to see which solutions had been dropped on the way, what kind of choices had to be made, and most importantly, what was the grand idea behind the project. That is why we will be asking for sketches, drafts and detailed descriptions so that we can fully understand their technique and the process that resulted in the awarded works.

This article is part of Architecture Competitions Yearbook 2021 – where more stories and inspirations like the one below can be found.

Archstorming keeps working on humanitarian architecture and this new competition takes us to Senegal (Africa), a country with regions where only 50% of school-age children have access to education and where classrooms are often crammed with up to 80 students per class due to the limited number of structures.

In this project Archstorming collaborated with the NGO Let’s Build My School (LBMS), a UK registered charity which was founded in 2016 to build schools in developing countries with a particular focus on remote areas which lack educational facilities. Beyond delivering structures built using locally sourced, sustainable, recycled materials, LBMS researches and applies construction techniques which do not require any prior technical skills in construction so that the local community may be able to replicate the process and help to further develop their village long after LBMS has left. Archstorming was calling for proposals to design an elementary school in Marsassoum, Senegal. The school that is currently being used is built using bamboo walls and zinc roofs and it is in very bad conditions. The classrooms rarely survive the rainy season and that results in the cancellation of classes and students failing their academic year. This competition looked for innovative and low-cost construction techniques in order to replace this temporary school with built structures. One of the most important aspects of this competition was to inspire people so they can build their own houses using the same technique once the construction of the school has finished.

The new school will need 7 classrooms, a library, two offices, and latrines. In addition, each contestant could optionally include a canteen, an orchard and a small corral in the facility. Expert judges with experience in Africa, such as Francesca Vittorini and Andrea Tabocchini from Italy, Tore Grimstad from Norway, Ulrich Röhlen from Germany, Zani Gichuki from Kenya, ColectivoMEL from Portugal or Marc Thorpe from the USA thoughtfully selected the five winners and ten honorable mentions of the competition.

For us as architects, architecture competitions represent a great opportunity to learn, explore and think about projects that we do not always have the chance to design due to the dynamics of our local markets. These competitions also might be understood as the synonyms of a challenges. Their structure doesn´t allow for a frequent interaction with those who promote the project, thus the whole design process is an exclusive reflection and interpretation of the design team. This factor enriches the experience and at the end it is possible to see very clearly the vast variety of proposals and interpretations that can be developed around the same topic. 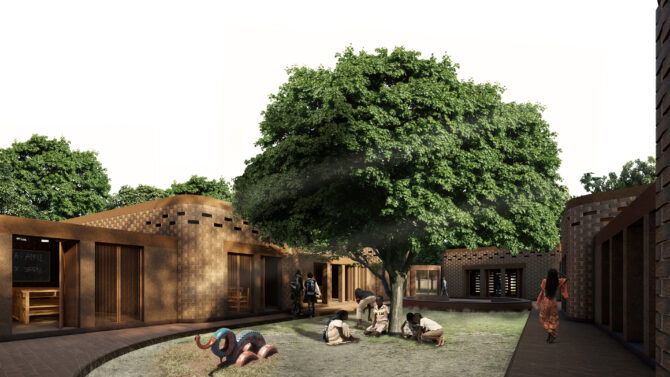 For the SENEGAL ELEMENTARY SCHOOL entry, we were motivated by every thought described previously as well as by the meaning of creation of an educational project in a developing country. This idea made us even more passionate. Even though Marsassoum (the city for the project in Senegal) is located very far away from our homeland Colombia, we could perceive many similarities with our own context. It made us feel very close to the problem and helped in understanding it better. With all of this in mind and with the faithful conviction that education is the greatest engine for change, we entered the contest organized by ARCHSTORMING. An additional factor that prompted us to participate was the certainty that the winning proposal was going to be materialized. 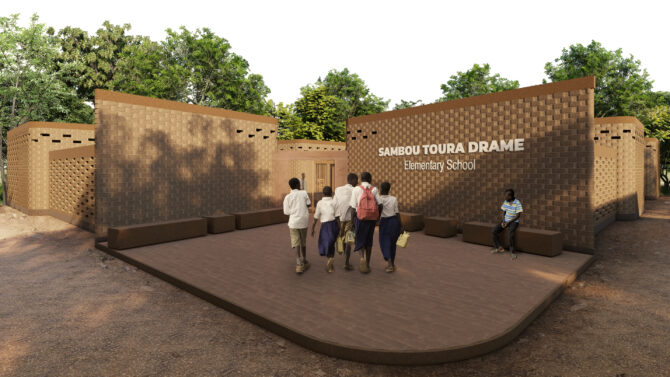 While we are approaching an architecture project, we usually start by questioning ourselves about it. We look for the key questions – what is relevant and what can boost our proposal. In this case, before asking the questions about the project itself, we decided to start by trying to understand the place where our project would be located. Inquire about its history, its geography, its culture, its traditions, the way in which they inhabit and many more allowed us to immerse ourselves in the local culture. In this way we capture the values that the project should have. We had not drawn the first line on paper up to this point. Nevertheless, we felt closer to the design. 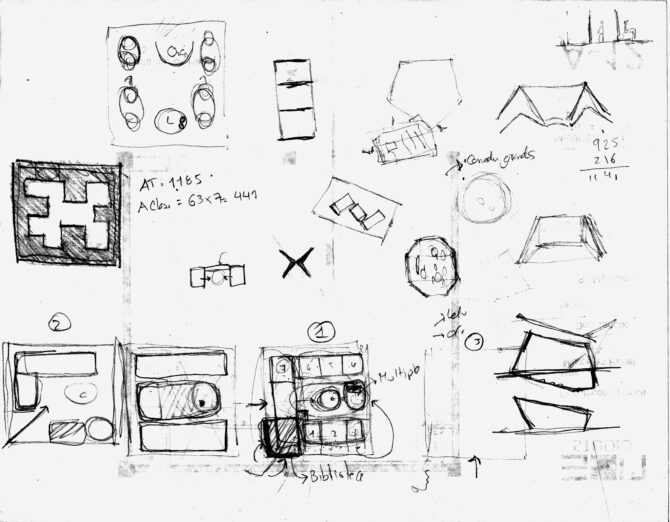 Researching about the social context, we discovered a strong tradition of grouping by families. The territory is occupied by small buildings that grow around a common space. When children grow up or a member marries, they become independent by forming small villages of organic shape and dispersed volumes. For this, the work called “La Vivienda Senegalesa Actual” by Elena Re Tarrero was important for us to understand how these relationships are reflected in their architecture and way of living.

In our architectural practice we faithfully believe that architecture is a cultural representation and that the built environments communicate a wisdom that reflects our own understanding of the world. Therefore investigating other cultural aspects such as crafts, dances, music, painting, etc. is essential to abstract transferable concepts to the project. For this reason, the project was conceived with a coherent image inspired by traditional architectural expression associated with local materials that have specific characteristics of color and texture.

The understanding of this topic is essential because the project is a physical element that interacts and is affected by the physical conditions of the place in terms of sunlight, rainfall and wind orientation. All these factors must be resolved. This is not negotiable in architecture. Water management was an essential aspect. The place presents seasons of high rainfall followed by seasons of intense sun, thus creating channeling and storing strategies of water was part of the proposal. The envelope of the project had to allow the passage of the wind while protecting the privacy of the internal spaces. In order to assure these conditions, openwork walls were implemented. It was supported by the materials selection, seeking for solutions obtaining comfort through high coefficient of thermal mass that would keep the internal spaces cool. 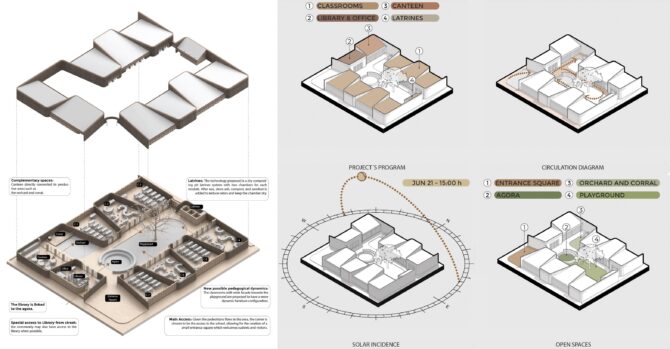 Once we had defined the most convenient scheme for the project based on the conditions of the place, the environment and the program, we examined the work and we wondered about the identity of the proposal. We asked questions such as: Does this project belong to the place? Does this project actually respond to the way of living of local people? And what is this project as an architectural idea? Among many others, they were part of the conversations in the workshop.

Another advice that we can mention involves a personal vision. For us, making architecture is about exploration, and this exploration is more fun and fruitful when it is done as a team. We believe that architecture should be debated, discussed. It should be dreamt and drawn. This is why we must be open to share our thoughts without shyness. Something we say can detonate an idea in the mind of another person and help to form a project with bigger value, as a team.

While all these questions were going through our heads, we made explorations in 3D models, sketches by hand and talked about the project. Step by step we got closer to the idea that pleased us. We finally decided to compose the entire project as the development of a single constructive element as a single and continuous wall that was developed by creating a series of dynamic spaces, (characteristic of contemporary educational spaces). This, in turn, expressed a constructive clarity ideal for local self-construction. After looking for the most appropriate development of the structure system, we started adding other elements according to it, such as complementary enclosures, openings and doors and their arrangement within the project, among others.

As we approached the development of the roof, we were very clear that it had to solve the collection of water for the use of the school. For this reason, we looked for different ways to channel the rain and solve the roof. We tried independent structures, for example continuous roofs, overlapping roofs, etc. Finally, we decided to look beyond the function and find a way to integrate this element to the identity we were looking for. This is why we thought about subdividing each space with a different roof slope. The variation allowed us to have a less monotonous and richer image of the project. Differentiating each roof granted us the possibility to resemble traditional constructions that are based on the dispersed grouping of various volumes on the ground. Therefore, we decided that this roof option was the most conducive to solving the water collection requirement in small areas and to convey a project idea closer to the place and culture.

When the design was complete, it was time to think about the representation of the project. In our case, we wanted to include diagrams with plans and renders, we began by explaining with some graphics the volumetric transformations of the building, the generalities of the composition and the so-called genesis of the project as well. Then we showed general plans covering the necessary information to explain and express the ideas of the entire proposal. We wanted to be strategic with the use of graphics and texts, so we didn´t saturate the boards with too much information. We go from the general ideas to the particular ones, which is a strategy that we recommend, but that will really depend on each project and what each competition is looking for. After preparing the general diagrams, we continued with the explanation of the construction details of the building, the development of the technique and the operation of some important areas and elements such as latrines, walls and classrooms, clarifying concepts that are not shown in the general plans. After defining the series of graphics that strategically best explained the proposal, we sought to unite them in a general composition for the board.

Here we can provide another advice: Never forget that we communicate with everything we do. Pay attention to every detail of a presentation, such as choosing a color palette, looking for correspondence between the proportions of different graphics, minimizing the amount of text to the fundamentals and creating a clear and well-organized composition. 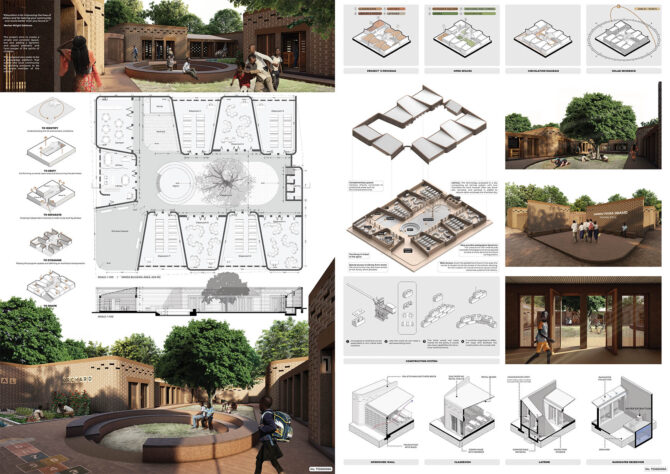 Each of the previous steps led us to discover the project we were looking for. We firmly believe that the process is sometimes more important than the result. Even before knowing the results of the competition, we already felt enriched by having absorbed the ideas and concepts in the definition of this project. By daring to explore solutions in an unusual context and think of the capacity, we all have to empathize with the needs and conditions of people from another place.

If you would like to ready more case studies like the one above please check our annual publication – Architecture Competitions Yearbook. This book is perfect for you if you want to know: 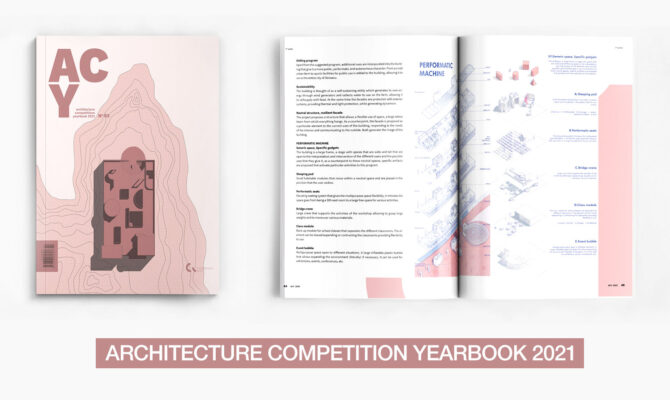