Wilmotte Foundation is pleased to invite you to bring new life to Pondorly, a bridge-building and southern gateway to Paris, which shall serve as the support for a reflection on the nature of the contemporary graft.

The best projects, selected by an international jury, will be remunerated, exhibited in Venice at the Gallery of the Wilmotte Foundation, and published in a book dedicated to the competition.

We count on you to innovate within the project constraints, stimulate your creativity, and propose a project at the level of the site and its future ambitions.

Pondorly connects the city of Rungis to the Marché d’Intérêt National (M.I.N), the biggest food market in the world. Il’s spans highway A106, which connects Paris with the Orly airport.

It is surrounded by hotels, parking lots and a gas station.

The new Pondorly will be dedicated to host events of every dimension. You’re invited to create a festive place for use during the day as well as during the night. Your project could include: a nightclub, a concert hall, a cinema, a restaurant, an exhibition hall, a bar, etc…

The ability to cross the bridge must be preserved.

Your architectural graft can assume any form or scale; however, the existing structure of the building must be retained in your proposition.

Your intervention should also turn the bridge into an architectural signal; a true symbol for anyone entering Paris from the south.

The 7th edition of the Prix W has been launched on December 11th, 2015. The deadline to submit your projects is:

Early April 2016, an international panel including experts in architecture, urban planning, and landscape design, will select the best projects.

The three winning projects as well as those receiving honorable mentions will be exhibited in Venice at the Wilmotte Foundation Pavillon as part of the International Architecture biennial. The exhibition opening will be held in May in the presence of the winning teams.

The winning teams will also be invited to Venice for the exhibition opening. Winning projects will also be presented in a book dedicated to the competition. 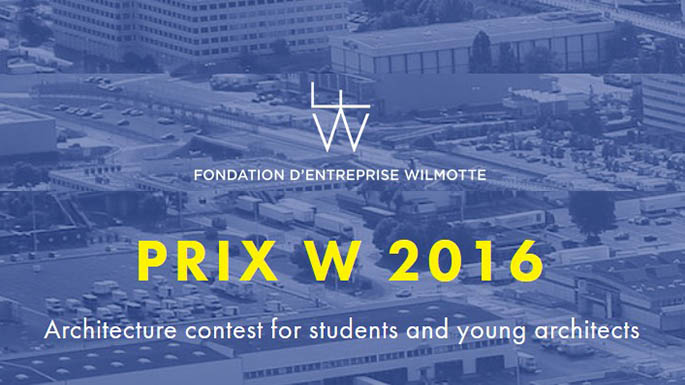