In this competition, we encourage participants to come up with visionary concepts to reinvent an urban hotspot for biodiversity, within and beyond urban parks – only 2 drawings, absolute freedom of scale, or program. Participants are asked to imagine a new urban model, to promote biodiversity into the specific context of the city of Rome, Italy. Submissions can be ideas for new green infrastructure, parks, green buildings, or any kind of strategy that would boost biodiversity while enhancing the urban experience of a historical city such as Rome.

Increasing biodiversity of urban areas requires a great creative effort, trying to find quality in linking nature and the city. Solutions can be focusing on architectural aspects, green urban systems, parks, public space, and the cityscape as a whole. Natural hotspots serve both citizens and biodiversity. On one hand, they can improve air quality, provide quality public space and generate a unique urban experience. On the other, they can create green links, protect different habitats and restore ecosystems for endangered species.

Re-Nature Rome is part of the “Cities of Tomorrow” competition series, developed to reimagine urban life through a variety of creative design concepts and ideas. What kind of role can we play as designers in reimagining urban life? How can we produce new inspiring visions to trigger a discussion around alternative models of living?

Re-Nature Rome aims to answer those questions with a particular focus on biodiversity in urban areas.

Non Architecture Competitions are open to all human beings, from every age and cultural background, working in groups or individually. The registration fee is paid per team, regardless of how many members form it. Personal information of all the team members can be uploaded during the submission procedure of the final drawing.

Thinking about the participants interested in registering in our different competitions, we are giving the possibility to register to more than one competition with a special price. 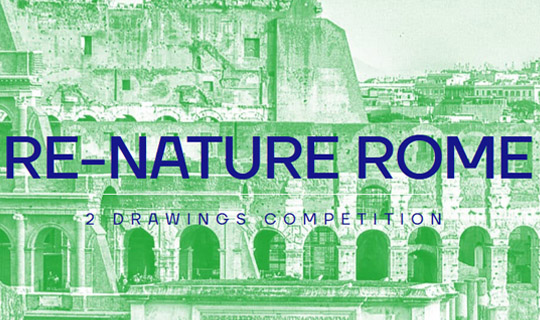