For The Last Genocide Memorial competition, we are calling for submissions for a memorial that honours all the victims of genocides throughout history. Participants are tasked with exploring architecture as a tool that can help to communicate these tragedies to different groups of people around the world. The memorial needs to educate visitors of the causes of these terrible events, the impact on the wider communities, how they’re still affected to this day, and do so in a sensitive way that shows respect to the many individuals who lost their lives during genocides.

The number of deaths caused by genocide during the 20th Century was at its peak during World War II, and the Holocaust remains one of the darkest moments in human history. Since then, the number of people killed in genocides has drastically decreased, but the number of communities still targeted specifically for their ethnicity, religion or political beliefs has remained fairly consistent.

Unfortunately, since World War II ended, genocides have still occurred, during the communization of Eastern Europe, China’s land reform and Chinese collectivization, as well as the genocides that have taken place in Pakistan, Cambodia, Rwanda and Sri Lanka.

The Last Genocide Memorial competition is being run in partnership with the City of Brampton Canada, Brampton Tamil Association (BTA) and Brampton Tamil Seniors Association (BTSA). They’re currently calling for legislation to recognise the atrocities that took place in the Sri Lankan Civil War, in which thousands of civilians lost their lives.

Winning designs of the Last Genocide Memorial competition will be put forward for consideration for construction, and so practical aspects will need to be carefully considered for a proposed site with a 3.7 meter diameter and 5.5 meter height.

Competition is open to all. No professional qualification is required. Design proposals can be developed individually or by teams (4 team members maximum). Correspondence with organizers must be conducted in English. All information submitted by participants must be in English. 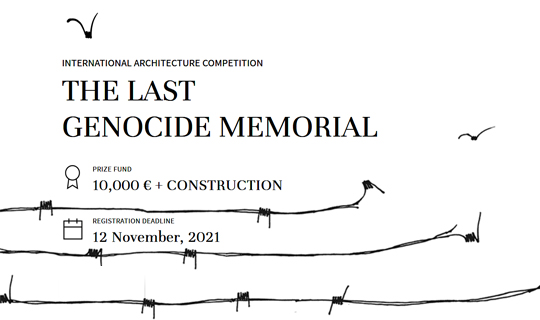