This competition is the first annual Viktor Nilsen Architecture Ideas Competition, established in the frame of the Mariupol City Urban Development program.

To determine the best ideas and authors of the subsequent project for the landscaping of the Vyzvolennia Square, the revitalization of the DASU building and the adjacent area; to boost further sustainable development of the site as one of the epicenters of the City Strategy 2021 implementation.

1. To reconfigure a part of Mira Avenue between the intersections with Zemska and Torgova Streets into a pedestrian zone with the possibility of the further usage of the project proposal for the whole Mira Avenue. Consequently, to turn it into a pedestrian area and provide transport traffic proposals on the site.

2. To convert the competition site into a pedestrian public space.
Project proposals are required to guarantee:

Project proposals has to provide the landscape solutions in terms of:

The use of sustainable energy-efficient techniques and materials is appreciated.

The competitors are encouraged to:

– old tram tracks and paving on the Vyzvolennia Square;
– lawn on the territory of Kozatsky Park in the mode of its year-round functioning as a public space and a fair that entails a crowd of people;

3. To reclassify the DASU building into a City Community Center

Architects, landscape architects and urban planners from around the world are invited to contribute to the Open international architectural ideas competition for the landscaping of the Vyzvolennia square and the revitalization of the DASU building with the adjacent territory in Mariupol, Ukraine

The site is situated in the central and the most populous district of Mariupol called Tsentralnyi (Central). The district represents the Old Mariupol, its historical core. Tsentralnyi district is defined by the coast of the Sea of Azov, Kalmius river to the east, Shevchenko Boulevard on the north and Metalurhiv Avenue to the west.

The peculiarity of the competition site lies in its historical significance and unique ability to boost further sustainable development of the site as one of the epicenters of the City Strategy 2021 implementation.

The competition site consists of the section of the Mira Avenue between the intersections with Torgova and Zemska Streets, Vyzvolennia Square with the Cossacks Park and the DASU building with the adjacent territory located at Mira Avenue, 1.

The competition site consists of three parts:
part 1 – section of the Mira Avenue between the intersections with Torgova and Zemska Streets
part 2 – Vyzvolennia Square together with the Cossacks Park
part 3 – DASU building with the adjacent territory 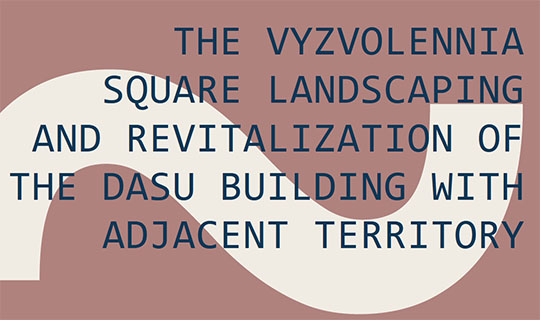