Call for Ideas: Adaptive Reuse of a Tourist Office

Skagen is the northernmost town in Denmark, located on the top of the Jutland peninsula. It is widely known for the Scandinavian artist colony ‘Skagensmalerne’, who assembled and worked in Skagen from the late 1870s until the turn of the century. But it is also one of Denmark’s main fishing ports, and the unique nature in the area in addition to the large number of architectural and cultural sights attract up to two million tourists annually, making it what you might call a seasonal town.

The Skagen station is the main railway station in the town of Skagen. The station opened in 1890 and the main building was rebuild by architect Ulrik Plesner in 1919. The building has recently been sold to Danish investors and the small arrival hall is now empty and closed off. A bike rental shop is housed in one end of the station behind the small tourist office. They now also own the former tourist office and would like to add a garage extension while restoring the small building to a new use.

Each conceptual design proposal should include the following:

1. New use
What could this tiny building be used for? Should it be a workshop for an artist, a tiny bar, an interactive information kiosk, a huge fish tank or whatever would benefit the local community as well as all the visitors that pass by each year.

2. Restoration
The identity and shape of the building including the existing brickwork should be kept and restored. The surfaces, the interior, the extension(s) can be anything that fits the new use.

Deadline January 18, 2019
One A4 page with a conceptual sketch of the adaptive reuse of the building.
Including a plan, one perspective sketch and a 200 word description.

Exhibition February 10 – March 9 2019.
The three projects will be exhibited in the building for a month, and the locals will have the opportunity to vote for their favourite project. 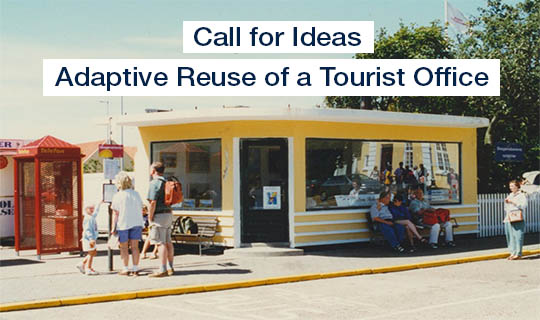