Climate change chaos is upon us. Driven mostly by the massive release of carbondioxide from burning fossil fuels, the average temperature of the Earth has risen 1°C. This temperature increase has led to droughts, famine, floods, increased extreme weather events, displacement of thousands of people, the rapid disintegration of ecosystems, and a foreboding promise of mass extinction. Even under painstaking carbon management plans, such as the Paris Agreement, Earth is locked into 3.5°C of warming, enough to collapse every ecosystem upon which our lives depend.

The reality is bleak – but solutions are real. Architects, engineers, scientists, artists and visionary politicians are creating realistic and attainable ways transfer to 100% renewable energy and bring atmospheric carbon dioxide back to a safe level. However, current economic and political forces are in direct opposition with the solutions, ensuring our course toward catastrophe. Fossil fuel industries are entangled with national leaders, policy makers and global economies
Design and architecture cannot fight this system of corrupt wealth and power from within it. Therefore, design must not only move outside the realm of money and politics, it must move to actively oppose money and politics. To stop climate chaos, design must amplify the power of dissent. With protest and design ingenuity, collective action will create real progress on climate change.

Temperature increases have led to droughts, famine, floods, displacement of thousands of people, and the rapid decline of many ecosystems.

Business as usual will not solve it.

Current economic and political forces are in direct opposition with the solutions to climate change.

Business as usual must be disrupted.

By holding politicians, investors, and business leaders accountable for their climate-wrecking practices, acts of dissent can save the planet from climate catastrophe.

We can design that disruption.

Climate of Dissent is a climate change protest design Competition.

For dissent to be effective, it must be rigorously designed. Significant acts of protest may appear to spontaneously erupt, but the reality involves months of brainstorming, planning, organizing and training. Similarly, acts of architecture require immense coordination of moving parts, attention to detail and choreography of people. This overlap suggests that architectural designers can make powerful facilitators of successful dissent. As protest becomes an increasingly vital tool for expression, it offers architects and designers a new role to serve public interest.

Radical acts of protest redefine the rules of the space they inhabit. They can challenge the ownership of city spaces by reclaiming public space. A march can challenge the conventional use of city streets. Banners and projections can transform building façades into messages. An occupation can reprogram spaces beyond their originally designed intent. With the right amount of coordination, there is no end to the possibilities. Any of the elements that affect the experience of a space are at play, but achieving impact is not simple, nor incidental. As a design problem, the challenge is to understand power and control in a space, who wields it and how can those forces can be rearranged to achieve a goal.

For the competition, participants will design an act of protest centered on climate change.

The action can be performed on a single site, or coordinate across several sites. As an architecture and design competition, the action should exist spatially – whether by transforming city plazas into occupation sites, redesigning building facades through guerrilla banners or projections, reorganizing circulation routes through creative blockades, etc. Examples of tools and methodologies used by creative activists can be explored in the Toolbox section on the competition website. Be bold, be strategic, and cause some trouble. 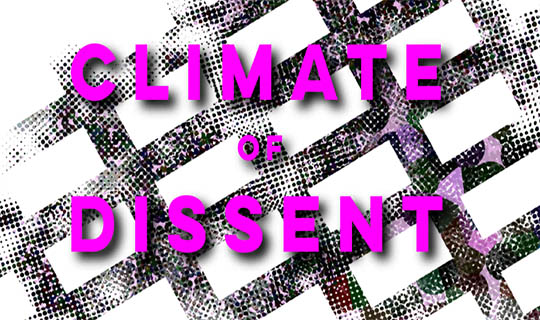