Located between China and India, Nepal is all along the Himalayas. These high mountains offer a range of beautiful landscapes with the eight highest summits of the world. Nepal gets an important profit from the hiking tourism, which represents at least 10% of the GDP of the country. Although well exploited by the country, its environment is a difficult aspect for its development with a complex topography and a rough climate. Seasons rhythm the country’s activities with dry winter and summer marked by important monsoons.

The diversity of its ethnic groups, its castes, and its languages contribute to the richness of the culture of this country. Cults and religions take an important part of the Nepalese daily life; Hinduism, practiced by the majority of the population, has been coexisting with Buddhism for centuries. Architecture, culture and religion are tightly connected in Nepal, where the most beautiful wood or rock sculptures mainly stand in temples and monasteries. Nowadays cities and villages still come alive at the rhythm of religious festivities.

With 29 million inhabitants, more than 85% of the population live in rural area. Nepal is divided in 75 districts, then in «VDCs» (Village Development Committee) who correspond to municipalities. Villages’ structure can differ from one place to another. Some are composed by groups of houses, with a dense typology. Other are more scattered, with houses separated from each other. Time perception is felt differently: it is common to have to walk for a few hours to walk across a village. These villages are sometimes badly connected or even not connected at all to the main cities, which is why education has been hard to access for a long time. Nowadays an important improvement is visible, with 84% of alphabetization in the young population.

Nepal has been benefiting of its geographic situation between its bordering countries for a long time, being a natural stop for merchants and travellers. Today, it is left behind as compared to its neighbours. There are many challenges to development: drinkable water, electricity support, communication infrastructure, wastewater management, infrastructure for transportation… However, these last years, some aspects of the development have been considerably improved. Electricity support became constant in the major part of the country and communication infrastructure have improved even in really retreated villages.

During the last ten years, Nepal has got through economic and political crisis, but its biggest challenge is to recover from the terrible earthquake that has devastated part of the country on 25 April and 12 May 2015. In the area around Kathmandu, earthquakes have destroyed a huge amount of constructions and caused more than 9000 deaths.

In the aftermath of this disaster, international assistance has worked together to rebuild the country. The outcome was positive but not to the scale of the real needs. Two years after, the mains NGOs are leaving to other assignments, but the damage is still present.

In this context, ARCHsharing, in partnership with Rook’n Wood NGO, invites participants to imagine the construction of a community center in an area 20km away from Kathmandu.

The goal is to propose a useful infrastructure which improves the daily life of the inhabitants. It shall be a community a building serving several of the village’s unaddressed needs. The facility will provide a community room, an atelier, a kitchen, a media/cultural space and bathroom (shower and toilets).

The winner will get the opportunity to build his/ her project with Rock’n Wood humanitarian NGO.

Registration is open to all students of schools and universities in relation with architecture, and to young architects less than three years after graduation. Teams can be multidisciplinary (architect, engineer, landscaper, …). An official proof will be asked during registration (student card, diploma, …).

Participants will submit two types of documents. One panel, A1 size, (landscape or portrait), and one explanatory notice, A4 size. The A1 panel shall contain all graphical elements needed for a proper understanding of the project. Any kind of representation is accepted (plan, section, 3D, axonometry, models, …). Files must be JPG format and no bigger than 10 Mo. File names will follow this template: TEAMCODE_A1_CCN (example: ACS_A1_CCN). Explanatory notice will be clear and concise, no longer than one A4 page. Font shall be Arial 12. Notice name shall follow this template: TEAMCODE_A4_CCN (example: ACS_A4_CCN).

For the good understanding of the participants, the following documents will be given:

-Brief stating the objective for the works

-Photos from the site and from Nepal

-Map for the plot of land (autocad and Archicad)

-Poster for the competition 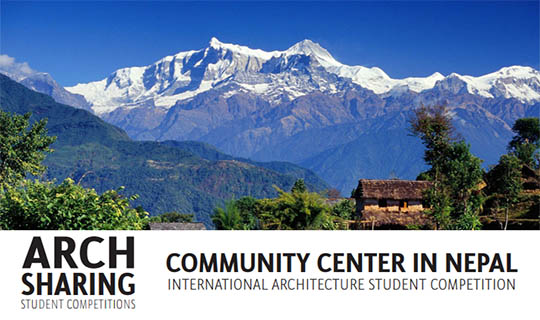