City of Ryde is inviting the world’s most talented and creative design professionals to submit their vision for an iconic gateway concept that encapsulates the urban identity of the City. The elevated position of the site has been a compelling component of Ryde’s history and skyline since early settlement and offers spectacular views of the Sydney basin, from the Blue Mountains to the Harbour.

The aim of the International Design Competition is to produce a bold solution that can generate broad consensus and community pride.

It will bring insightful design and creative solutions to the summit of our City that will guide future development of the site for the use and benefit of future generations.

This Design Ideas Competition will help define the future of the City of Ryde Civic Centre (the Site). The Site is prominent in the local and regional context. Sitting at
the crest of a ridge-line running northeast and southwest through Ryde town centre and situated 12 kilometres from the centre of Sydney, the Site presents an opportunity for speculation about the identity of town centres relative to proximate major centres.

The Competition comes at an interesting time in Sydney and Ryde local government politics. The New South Wales State Government has initiated a process to enlarge local government and to merge the City of Ryde with neighbouring local authorities. If the Site continues its long-standing use as civic administration the land area which it administers is likely to change profoundly.

This is an opportunity to undertake a creative re-imagining of the Site as it moves into a cycle of renewal.

The Competition seeks ideas from talented designers locally and internationally to provide an iconic architectural vision of the future.

The Competition is guided and underpinned by the core principles of the Ryde 2025 Community Strategic Plan to make Ryde a place where lifestyle and opportunities are available close to where people live, work and play.

THE GOALS FOR THE SITE

The Competition will be divided into two stages:

Stage One is an open and anonymous design competition, comprising the following key components:

• The Jury, provided with the comments of the general public, will determine the winner of the Competition

All submissions will be evaluated by the Jury for the quality of their response to the Brief based on the following design objectives. The criteria are weighted to assist the judging process. Indicative weightings are shown below.

The Jury is to review the submissions against their ability to deliver the following: 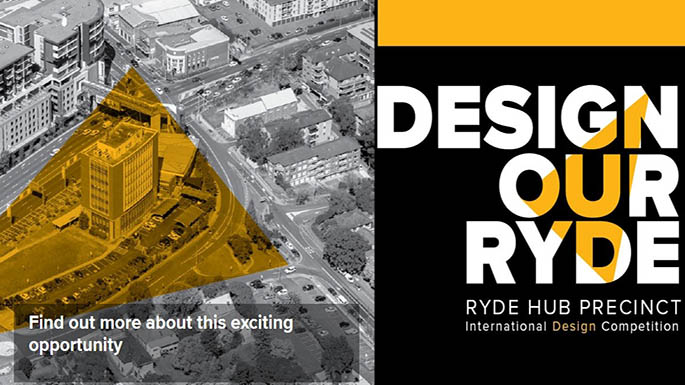