You should dream the possible knowing that your ideas may transform how Londoners live, work and play!

For inspiration, explore our website to learn more about what it would mean for London to be a National Park City. There are some useful FAQs here. Tweet any questions to us at @LondonNPC #NationalParkCity.

The best submissions will be published on our website and on social media, and will be released to the media in June 2017. They may also appear in Time Out magazine.

The London National Park City draws from the values of the UK’s rural National Parks – better conservation, better enjoyment and better economy – and extends these values into the urban context.

The initiative is about transforming London’s entire habitat. It’s about seeing the gardens, streets, rivers, buildings and parks as one landscape. It’s about protecting and improving the city’s existing green and blue spaces and developing other outdoor spaces to ensure that all Londoners have easy and free access to high-quality green space and to boost London’s biodiversity.

The initiative will inspire and educate Londoners, persuading them to get outdoors by stimulating an immense variety of exciting and imaginative activities and driving new opportunities. It will enhance the quality of life in London and make it a more attractive place for activities of all kinds, including business and investment. As the world’s first National Park City, London’s brand and its place as a global city will be enhanced.

Find out more about the aims of the London National Park City campaign on this website. Then… set your imagination to work!

We are running this competition because we want to attract the best ideas for achieving the aims of making London a National Park City. We are keen to not just see ideas for future urban developments, but re-imaginations of London’s current cityscape. Your ideas could be small scale and design in small changes into Londoners’ lives that have a big impact. Or they could be transformative on a large scale.

You can imagine London at any scale:

* What ‘micro-greening’ (eg a single balcony) can give a home to wildlife?
* Can a commuter route become a ‘green corridor’?
* How could a high-rise block enable children to play outdoors easily?
* What plans for streetscapes, neighbourhoods, or even London’s entire watershed could transform London lifestyles and address London’s challenges including air quality, increasing biodiversity, road congestion, community cohesion, mental health, and childhood obesity? 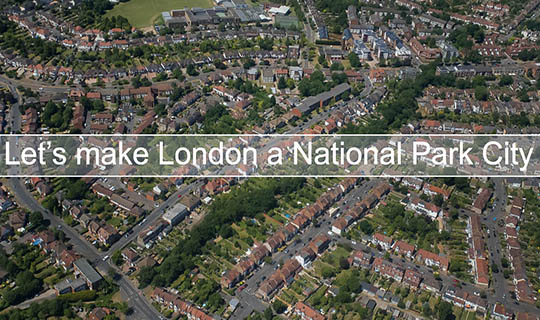