The second stage of the creative competition of the state Corporation Rosatom.

State Corporation for atomic energy Rosatom with the assistance of the communications ProjectNext agency and OfficeNext portal offers to take part in the second stage of the international creative competition for the development of the concept design the workspace of Rosatom for architects, designers, graphic designers, specialists in computer graphics and visual design.

The aim of the new phase of competition is to search for creative ideas and solutions in the design of the space which represent a concept of the “Rosatom – corporation of Knowledge” for replication it in all companies in the industry. Another important objective of the competition is an extension of the ranking of architects and designers recommended to work with facilities and objects of Rosatom.

As a result of the first stage of the competition in the 2014-2016 it was offered non-standard concept of architectural-planning decisions and interior design for offices, laboratories, manufactories and spaces for communication and recreation for employees of nuclear industry, some of which have been successfully implemented in the pilot sites of the first and second waves of implementation (the work can be viewed on the website: http://design-rosatom.ru/pilot ), and several architectural Bureaus received orders for the development of detailed design and support of projects.

The task of the contestants is to develop a design concept for the design of various working and public spaces of Rosatom, which reflect the values and image of the State Corporation and can be used in the Standard / brand-book of the working space of Rosatom State Corporation.

Prizes and conditions of participation
The contestants who submitted the best work will have an opportunity on a contractual basis to participate in developing the final version of the Standard/brand book of the working space of the state Corporation Rosatom. Also, the participants of the contest, whose work will be highly appreciated by the jury, will get to the ranking of architects and designers formed in 2014, according to the results of International creative competition “New space Rosatom”, which will become the executor at the project office “New space Rosatom”.

The contest period: April — June 2017
Dead-line for submitting concepts to the competition — 19 June 2017 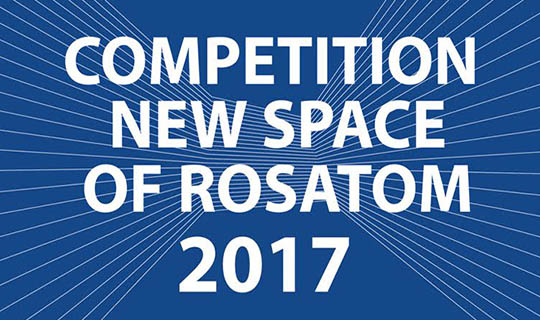