For this year’s Chicago Prize, we are calling for visionary proposals for Chicago’s Lakefront in consideration of the stated issues that imagine and speculate its scape.
Chicago’s Lakefront is a great contribution to the public it serves. This metropolitan edge has been defined by its industrial and commercial past, along with its recreational and cultural present. Figured through expansion and contraction, both naturally and artificially, its metamorphic transformation empowers the identity of the Lakefront.

Visionary plans, policy, and infrastructure have all played crucial roles in the development of the city and consequently in the definition of its edge. Today, conflicting interests regarding ownership, use, and value of the Lakefront have produced a stalemate of what this civic treasure could become.

As such, recent media coverage surrounding the Lucas Museum of Narrative Art and the Barack H. Obama Presidential Library, revealed the ongoing dispute about land-use along the edge of the city. Much of this debate grounds itself in the Public Trust Doctrine that seeks to ensure the preservation of the lakefront as a natural habitat for civic use.

A further dispute is anchored in two contracting conditions. Considered as one of the world’s best urban drives, riding along Lake Shore Drive (LSD) becomes an experience in motion that exposes the contrast between city and nature and a collision between the vertical urban wall and the horizon. Meanwhile, Lake Shore Drive disrupts the continuity and the ease of pedestrian accessibility between the urban fabric and the parkland along the shoreline.

As ones easily forgets, the Lakefront has been contoured artificially and manipulated throughout history beyond its once original natural boundary. Disputes, such as the retainage and continued development of a traditional park versus the restoration of the native Midwestern dune scape ought to be reviewed beyond discussions among preferences in landscape development, as this newly gained land should be understood as new ground for new visions.

For this year’s Chicago Prize, we are calling for visionary proposals for Chicago’s Lakefront in consideration of the stated issues that imagine and speculate its scape.

Would new strategies of zoning recharge this long strip of stand-alone city-land? Can architectural interventions function as a framework for the excitation of the edge? How will the collision of the metropolis and the lake create a radical emergence of the unimaginable?

Competitors are limited to the site area along Chicago’s Lakefront. Please see the attached Site Plan for details. The approximate length of the public Lakefront accessible to all residents is roughly 18 miles (28.96km), consisting of a trail for its entire length.

This is a speculative ideas competition. There is no set program for this competition; your definition of the program is part of the design problem.

*Answers to all questions will be posted to the competition website.

To register, send an email to chicagoprize2016@chicagoarchitecturalclub.org with the contact information for the entrant or designated team leader. 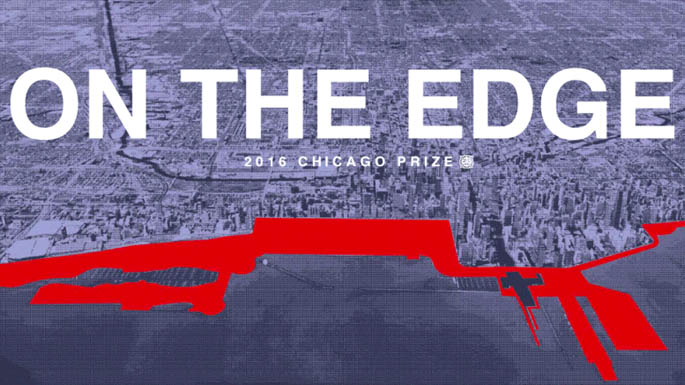