Collettivo Migrante has launched a call for projects for the design of a temporary installation: a ‘treasure room’ for Pennabilli, an ancient hamlet in the Romagna Appennines (Italy). The installation will be active during the International Street Art Festival “Artisti in Piazza” (1-5 June 2016). The device will be used as a camera obscura during the day and as performance space during the night.

This open call is part of the project Migrant Landscape, curated by Collettivo Migrante a collective formed by designers, educators and artists which are actively involved in a reading and interpretative process of the landscape surrounding the historical centre of Pennabilli. The aim is to experiment communication and participation strategies regarding the territory and directed towards the identification of possible valorisation processes.

The Chinese philosopher and founder of Mohism, Mo Di, formally described, in the 5th century BC, the creation of an inverted image of the world formed by light rays passing through a pinhole and projecting inside a dark room. He called this invention the “locked treasure room”. Across the centuries, this device has been used by artists and travellers to capture the elusive presence of the outside world. The camera obscura is a machine to collect fragments of reality as if they were precious objects, as living images capable to frame portions of complexity.

Once upon a time a constellation of rocks that generated from a whole calcareous block started to ‘navigate’ over the clay beds moving from the north and eventually fragmented in nu- merous pieces, thus generating the distinctive soil of not only of Pennabilli, but of the entire Valmarecchia area.

Two of these emerging rocks are the “roccione” in Penna and the “rupe” in Billi, as well as many other rocks that became strategic points for all the villages born from the so called en- castellation during the Middle Ages. This phenomenon gave origin to many urban centres that favoured the construction of a dense network of transport routes and that made this terri- tory an important area for medieval and renaissance Italy.

The camera obscura will take place right on top of Roccione, the navigating mountain.

This call is open to architects, designers, artists, sce- nographers or anyone interested in articulating a pro- ject of a camera obscura.
Individuals and groups of maximum 5 components can participate.

The winning proposal will have the possibility of constructing the camera obscura through technical support of local artisans dealing with recycled material, and being hosted in a young and creative environment during Artisti in Piazza Festival.

The winning entry will also be exhibit in a publication promoted by Collettivo Migrante and spread over archi- tecture, design and visual art magazines.

Once announced, the winning group will be contacted by Collettivo Migrante and given instructions for the re- alisation of the Camera Obscura. If necessary, the group will be asked to deepen con- struction details, and to implement the project or build only a part of it, according to the material available for construction. 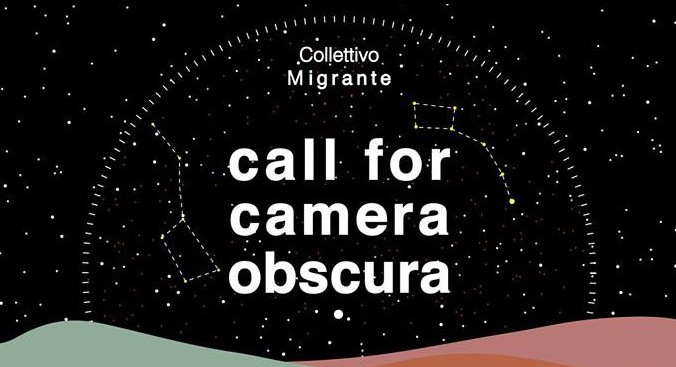