Results | Into the Rabbit Hole 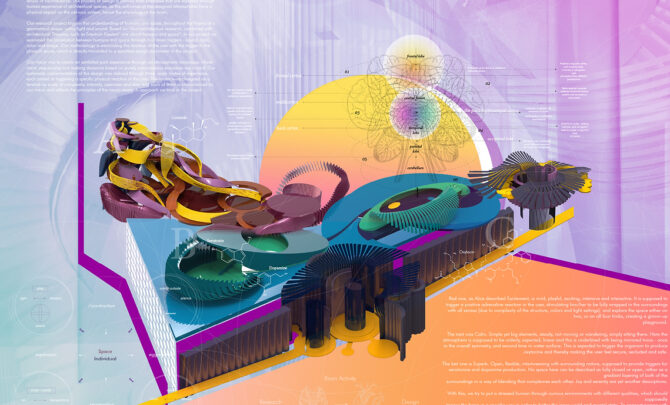 Red. Shining red, subtle pink, berry red, neon pink, hibiscus pink, salmon orange, fuchsia purple and all the red-purple colors were making Alice feeling like in ecstasy. So many shapes, so many routes and stairs that she could climb! Alice did not know where it was exactly that she was going, but something was telling her this was fun and she will find out later. Purple, red, berry red, purple, light, shadow, light, shadow, and she was on another platform.

– Oh, this is really high, where I am at. I can see so much from this point! But it doesn’t help much, because we don’t know where we are – consciousness said.

– well, but wasn’t it fun? you can’t deny that! – sub-consciousness didn’t want to be left behind.

-Because….. – consciousness was taking its time to define the reason, when subconsciousness jumped in with no hesitation: – It feels right.

Alice was feeling a little confused, but aren’t we all a little confused at a time? So she took the opportunity and went left.
Well, this was new to her. Violet shapes that surrounded her were suddenly high and stable, so she thought – this feels like a shelter, isn’t it lovely, how the space hugs me? – As she went, the shimmering light kept dancing on the surfaces of the shapes, so she touched it

-How soft and neat, and it’s looking nearly like marble, but it is not cold at all, that’s so oddly beautiful! – Alice thought. 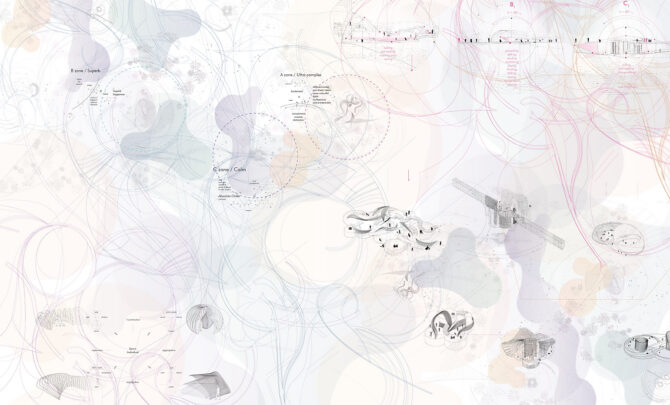 She liked the touch so much that she kept on walking with her hand on the surface. Each step at a time she was passing these voids, more and more light was in the way and suddenly she appeared to be above ground again. Awkwardly, she felt very calm, so she wasn’t even shocked or surprised, when the space continued to evolve into something very curvy, elegant, subtle, harmonic… something she would surely describe as supreme. The brilliance of the space kept amazing her. This time she did not pass through, but rather went in a more circular movement and she could get a new and even more brilliant view each time, as the shapes and spaces were interlacing each other and also interlacing out- and in- side. Something that looked like its a wall suddenly became a floor, or even a roof. Alice liked it very much. – This is a wonderful place to be, very excellent – this time consciousness and subconsciousness agreed.
For us, to design a space that can heal the mind it was crucial to know how the mind works.

Neuroarchitecture is a term describing the relationship between spaces and humans, through the lenses of neuroscience. The process of design is derived from principles that are explored through human experience of architectural spaces, as the outcomes of the designed atmospheres have a physical impact on the nervous system, hence the physiology of the brain.

Our research project lays on this understanding of humans and space, throughout the Prisma of a geometrical shape, color, light and sound. Based on Neuroarchitecture research, combined with architectural Theories, such as Friedrich Kieslers’ one about humans and space*. In our project we examined the correlation between humans and space through four main triggers – sound, light, color and shape. Our methodology is associating the reaction of the user with the trigger in the physical space, which is directly translated to a specified design parameter in the project.

Our vision was to create an exhibited park experience through an atmospheric landscape. Movement, sequencing and making decisions based on purely subconscious processes are crucial. Our systematic implementation of the design was defined through three main routes of experience, each aimed at triggering a specific physical reaction in the user. The routes were designed on a leveled-up scale of complexity, intensity, openness and size, and each of them is characterized by our vision and reflects the principles of the neuro-research approach we took in the project.

Red one, as Alice described Excitement, is vivid, playful, exciting, intensive and interactive. It is supposed to trigger a positive adrenaline reaction in the user, stimulating him/her to be fully wrapped in the surroundings with all senses (due to complexity of the structure, colors and light settings) and explore the space either on two, or on all four limbs, creating a grown-up playground.

The next was Calm. Simple yet big elements, steady, not moving or wandering, simply sitting there. Here the atmosphere is supposed to be orderly, expected, linear and this is underlined with being mirrored twice – once in the overall symmetry, and second time in water surface. This is expected to trigger the organism to produce oxytocine and thereby making the user feel secure, secluded and safe. 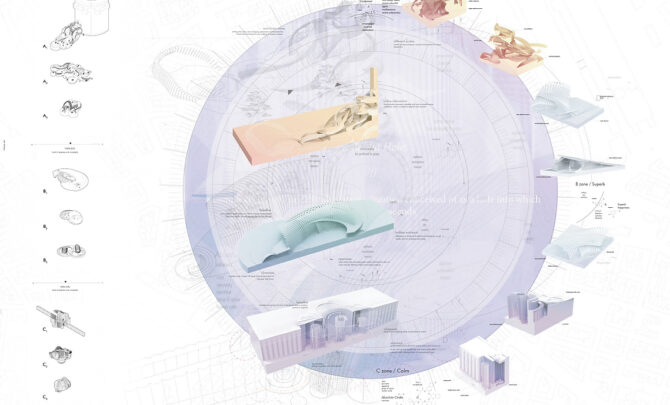 The last one is Superb. Open, flexible, intertwining with surrounding nature, supposed to provide triggers for serotonine and dopamine production. No space here can be described as fully closed or open, rather as a gradient layering of both of the surroundings in a way of blending that complements each other. Joy and serenity are yet another descriptions.

With this, we try to put a stressed human through curious environments with different qualities, which should supposedly trigger the brain in a specific way in order to better the inner world and mental state. To connect person with his/hers inner voice by detouching him/her from the outer world. Is this truly working like this? We can’t say, as the reaction of an organism is defined by far more factors than the direct scientific research based on outer impulses – but we can try.

Is this real or fully imaginary? Everyone can decide for himself. 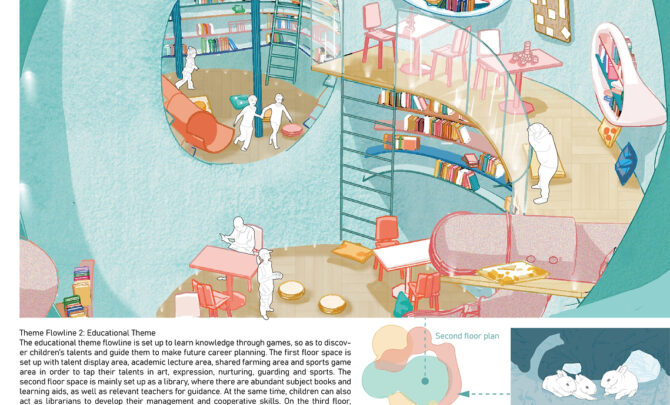 There are 6.97 million “left-behind” children in China. Their parents left hometowns to work in China’s big cities when they were very young, leaving them behind without parental care from an early age. Most of them are brought up by their grandparents or relatives, or even by their neighbours. The largest number of “left-behind” children is found in Sichuan province. We conducted a field study in the rural-urban bordering area of Cuiping District, where there are more than 7,000 “left-behind” children. Due to the lack of parental support and educational resources, these children suffer from character defects, depression, violent tendencies, resentment towards their parents and confusion about their future. We designed Bunnies in Burrowland to address these issues.

Bunnies in Burrowland is a subterranean healing building modelled on a rabbit hole. Its overall spatial relationship from top to bottom takes the form of being open to being semi-open and being private. The space is filled with plenty of play space for children to immerse and discover themselves. The aim is to guide the children to gradually open themselves up through the playfulness of the space.

Bunnies in Burrowland has three thematic flowlines that address the many issues that arise for “left-behind” children.
1. Family Affection Flowline
2. Education Flowline
3. Self Cognition Flowline 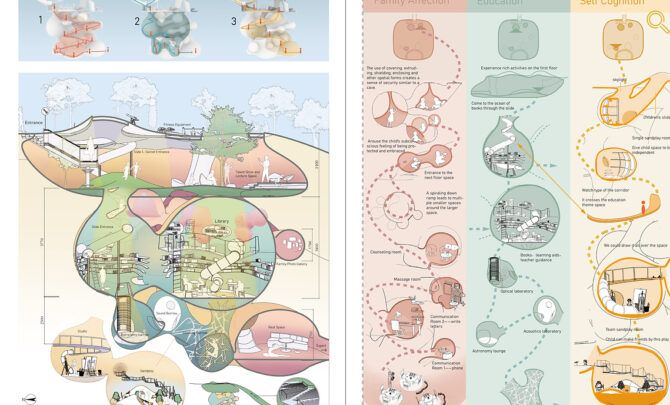 Theme Flowline 1: Affection Theme
The affection theme flowline is divided into two parts: One is a warm shelter space, and the other is a functional behavior space. The first three small spaces are sheltered spaces that imitate the nest form through the compression of space and soft materials, giving children an embrace, creating a sense of security for children to compensate for the instability caused by the lack of affection. The behavior space is the space connected by the 2-story photo gallery. The purpose of the space is to provide psychological guidance for children through external means, and then to gradually guide children to face their own feelings and to explore the right direction of affection.

Theme Flowline 2: Educational Theme
The educational theme flowline is set up to learn knowledge through games, so as to discover children’s talents and guide them to make future career planning. The first floor space is set up with talent display area, academic lecture area, shared farming area and sports game area in order to tap their talents in art, expression, nurturing, guarding and sports. The second floor space is mainly set up as a library, where there are abundant subject books and learning aids, as well as relevant teachers for guidance. At the same time, children can also act as librarians to develop their management and cooperative skills. On the third floor, there are four fun laboratories, namely, optical laboratory, acoustics laboratory, astronomy lounge and sports agility room, which are fun and educational areas.

Theme Flowline 3: Self Cognition Theme
Constrained by the level of physical and mental development, especially the level of language development, it is difficult for children to fully express their negative experiences in their growth process. When the backlog of negative emotions or experiences exceeds the threshold range of their own control, children may develop some degree of behavioral abnormality or psychological disorder. In the self cognition flowline, children can do what they are not allowed to do at ordinary times. Through sandbox games and drawings, scenarios of traumatic events can be slowly introduced to help children realize that “they can heal themselves” through scenario reenactment so that they can talk to their subconscious mind, understand their deep needs and invisibly release the stress and negative emotions from their life. At the same time, team sandbox games are added to cultivate children’s sense of companionship and fill the gaps of affection through companionship and games. 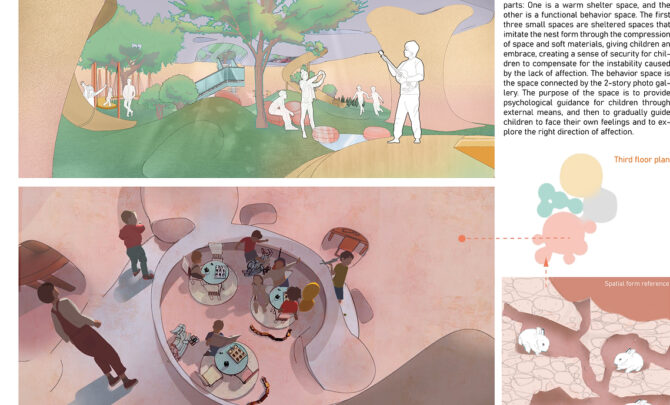 Bunnies in Burrowland Wandering in Wonderland:
In this space created for the mental health of left-behind children, we can heal the spiritual world of children from three aspects: Family Affaction, Education and Self Cognition. Children are no longer confined t o the unsatisfactory reality and boring square box, but have a physical and mental tour in this Wonderful, imaginative space. 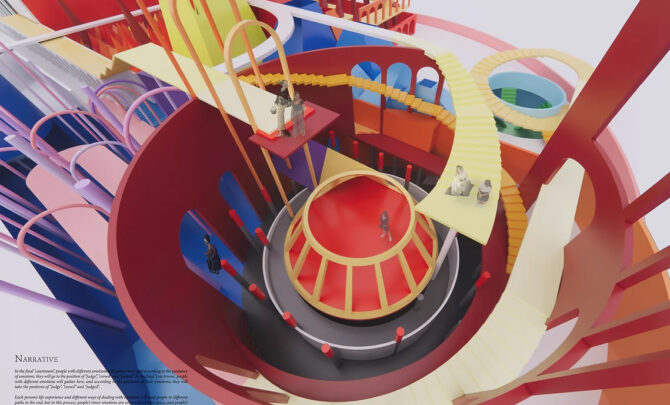 The pandemic brought about by the COVID-19 is now in its third year, and in different parts of the world, each country is fighting in its own way to combat this historic epidemic with major implications. The social impact of the pandemic is not only a huge challenge to the global economy, but also has a different level of psychological impact on each and every one of the people. The psychological problems of isolation affect all who experience it, and the psychological problems that arise in a small space can be masked, but are difficult to eliminate completely. We hope to create an emotionally healing space that brings a wonderful experience to de-escalate negative emotions in Shanghai, a megalopolis that has just been forced to close for 3 months due to the Omicron pandemic.
The American Psychological Association’s Rational Emotive Therapy, also known as ABC Theory, states that a person constantly repeats an irrational belief in internalized language, leading to unresolved emotional distress. This is one of the reasons why many people are addicted to their emotions and cannot extricate themselves from them. So we want to create a series of spaces to externalize and expand each emotion, and create certain connections between these emotional spaces. People can walk in this series of spaces and empathize with one of them, and experience the relationship between emotions and their development. And we also hope that the binary relationship created between different emotions will allow people to understand the emotional relationship of each other’s position. To create a wonderful sequence of emotional spaces to heal or relieve people’s emotional distress. 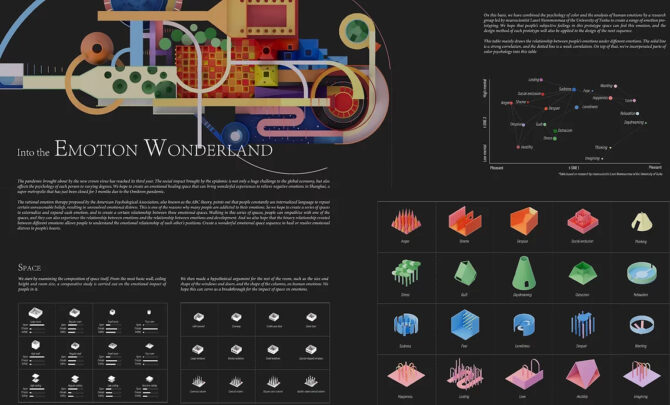 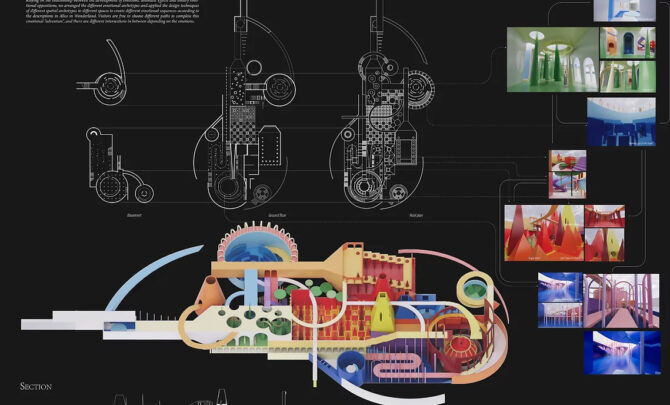 Each person’s life experience and different ways of dealing with emotions will lead people to different paths in the end, but in this process, people’s inner emotions are externalized into space, and people’s own emotions can be channeled through the guidance of the external space, so that they can get out of their own predicament and complete the healing process.
This is what our project is about: Alice in Wonderland, emotions and healing.

Congratulations to all the winners !