The competition is currently asked about how to define “Nature”. For instance, “Anthropocene” means a new stratum formed by the activity of mankind which has a significant influence on the global environment, such as massive emissions of carbon dioxide and large-scale reclamation. It has been advocated as a geological time after the Holocene. How should we live on such an unstable Earth which is susceptible to human influence?

Design for Ecological Democracy by Randolph T. Hester (Cambridge, Massachusetts: MIT Press, 2006) lets us think about the relationship between nature and human activity by simultaneously considering ecology and democracy. We must also think about living with changes in the weather, such as global warming, torrential downpours, and bomb cyclones.

Therefore, the team have decided “LIVING upon the NATURE” as this theme. It might be referred to problems around you. Once again, think about what nature is and what life is. The competition is looking forward to your proposals.

“The phrase “Living upon the Nature” might seem somewhat a strange expression. Rather than an image like a comfortable villa in nature, the meaning can be taken as living on the history of Earth or may be considered as living based on the large context of global environment. Looking forward to seeing architectures and cities that suggest rich relationship between Earth and humans,” said Ryue Nishizawa.

“We are living in this century in a world where human and nature are subsumed into each other, neither by artificial existence in nature nor human beings completely controlling nature. In my opinion, the architecture leading our era is vividly constructed by stating the way such world is,” said Akihisa Hirata.

“Think carefully of the word “up on” of “LIVING upon the NATURE”. If the word was “in”, life blending in with the rich forest may be imaginable, or if the word was “with” the term “symbiosis” may come to mind. “Up on” seems to encompass the life of the city, assuming the existence of nature. Looking forward to proposals responding to new perceptions towards nature,” said Yasutaka Yoshimura.

“The current situation which the impact on global environment by human activities has manifested, and the word “Anthropocene” is frequently adopted, it seems to show the spread of recognition that people, cities, and nature are always related and mixed continuously. On the other hand, frequent disasters bring the perception that people and nature are still different beings. How can we feel the reality of life in this chaotic view of nature and the world? Hoping to see proposals of diverse viewpoints,” said Tatsuya Hatori.

“Introducing “LIVING upon the NATURE” to our imaginations greatly expands the horizon for our immediate problems and enables us to draw new visions for our societies that are predicted to be severely fluctuating in the foreseeable future. Looking forward to seeing the advent of such new and dynamic art creators,” said Ryuji Fujimura

“Since the ancient times, humankind has developed and formed a culture by using its abundant imagination and wisdom. Essentially, nature is a state without artificial participation, and the human race who can change the providence has to take responsibility. How do we coexist with nature through architecture, or Anticipated to see your proposals for the future,” said Yukihiro Sohdai.

The results will be informed to the winners and will be announced in the January 2020 issue of SHINKENCHIKU. 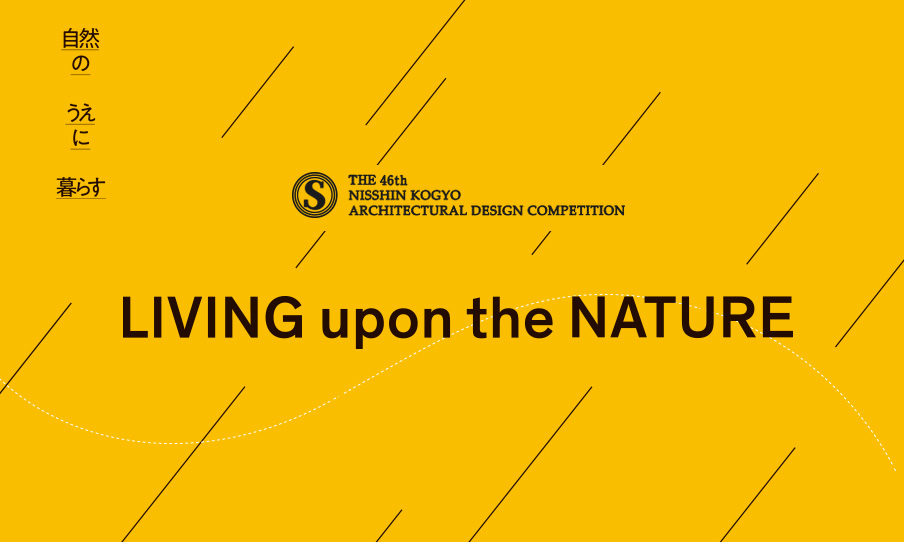