THE BENCH is an idea based design competition open to all ages and backgrounds. The challenge of the competition is to design and install a temporary structure on a street to transform the street environment to a form of public space. The challenge of THE BENCH 2017 is to design a seasonal seating- space along the street edge(s) defined by the competition. The competition will unfold in two phases: selection by jury and installation for seasonal use. Multiple entries will be chosen as winning entries and will be constructed for public use during the 2017 WINNIPEG DESIGN FESTIVAL.

During the festival, the organizers will schedule and facilitate THE BENCH TALKs alongside the benches and the festival grounds. The talks will invite urban designers/planners and the public to discuss ‘street as public space’ and specific resonances that the installed entries bring to the topic. Designers of the winning entries invited to take part in THE BENCH TALK.

All entries will be documented and exhibited for public viewing, to generate awareness and discussion about ‘street as public space’. The organizers of THE BENCH will facilitate ongoing discussions of the topic during the use of THE BENCH and will seek ways to disseminate THE BENCH (i.e. donate to public school/ park) at the end of the season.

PUBLIC SPACE | The objective of the competition is to re-envision and re-engage the street as a public space. The competition invites ideas to transform the street as a public space through an infrastructure intervention, a seating-space. The challenge is to design a public seating that can engage and transform the dynamics on the street, triggering and sustaining temporary (short) social and cultural transactions. THE BENCH will be installed on street edges during the 2017 WINNIPEG DESIGN FESTIVAL, at predesignated areas of the festival grounds.

FUNCTIONAL SPACE | THE BENCH must function as a public seating with minimum of 12 seating space-surfaces. Ease of use and access is important consideration to facilitate instant, ongoing and changing street dynamics. General street safety including trac related issues and legibility of its physical presence are important considerations in the design. Ancillary functions such as bike racks, planting areas, and storage can be considered as a part of the design, as long as they do not interfere or compromise the ‘seating function’ and ‘street-safety’ aspects of THE BENCH.

TEMPORARY STRUCTURE | THE BENCH, as a temporarily public infrastructure, will be installed on the street’s edge [see site description] during the festival and possibly through the fall season. Once installed, THE BENCH will remain outdoors exposed to the weather conditions and public interactions for the entire duration of its season. The fabrication, installation and the material condition of THE BENCH must consider such exposures and interactions. The design must also consider the structural and functional integrity of THE BENCH for the entire duration of its installation season. THE WINNIPEG DESIGN FESTIVAL and sponsoring businesses will assume the use of the ‘site’ from the city and general public liability for the duration of their use.

FABRICATION INSTALLATION | From digital fabrication to reuse/recycle, the competition is open to all mediums and methods. However, all entries are expected to position their ideas in responding to following general criteria: 1. Simplicity in construction and ease of assembly, 2. exposure to elements of the street environment, and 3. ease of cleaning and maintenance of functional and structural integrity, including general safety within the street environment.

Two sheets of 11”x17” (horizontal) with graphic illustration of the proposal including important dimensions, fabrication methods, and spatial/street use scenarios
Design Document must be anonymous without any elements of identification
A unique five-digit project ID number generated by the entrant is the be positioned at the bottom right corner of both graphic sheets.

Additional materials (including drawings and/or rendering) may be requested to better facilitate the fabrication and installation.
VIDEO: a video file (up to two-minute in length) explaining the project, the team, and its response to ‘street as public space’, will be requested. This video may be used for promotion and crowdfunding purposes. 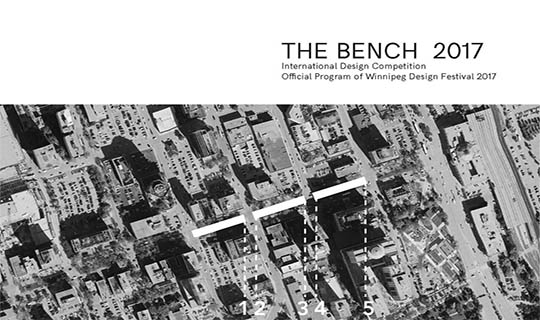