Seoul Metropolitan City executes a design contest targeting native and foreign experts in order to construct a women and family complex facility, ‘Space Salim’, at Dongjak-gu Daebang-dong 340-3 and three lots near Dongjak-gu Daebang Station (near Daebang Station exit 2 and 3, total area 8,874.8㎡).
This contest is held as a part of the Seoul Foundation of Women and Family’s ‘Space Salim formation plan’ that was selected through the presentation competition for redevelopment of U.S. Army base at Daebang-dong in 2014. Through this contest, it is planned to improve the dignity of the public buildings of the Seoul, to promote the development of the architectural service industry, and to utilize the complex facility as a major public building of women and family policy.

The district of Dongjak-gu Daebang Station is the place at which the U.S. Army base, ‘Camp Gray’, and the ‘Seoul Women’s Shelter’ that accommodates prostituted women, the runaway and demented elderly, and vagrants were located for 55 years before the retrocession at 2007. It is the place where the division, poverty, and women’s tough life are accumulated, and it is able to feel a pain of our modern and contemporary history.

CHALLENGE
The new women and family complex facility to be made will be the space of ‘Salim’ that revive the relationship among family members and female households. The facility is the space that tests and extends insoluble and old tasks like increase in single-person household, disintegration of social relationship network, lack of communication among family members, low female labor market participation for 20 years, gender inference, and everything with interesting ways.

Referred issues are slow and social issues to be solved by moving people’s hearts and building up heavy relationships. Also, it is not solved by a single political solution, but by cooperation among several areas and creative ideas. This is why a social renovation platform where citizens themselves could be subjects of problem solving, and various private groups could be facilitators in the process of problem solving of citizens is needed. Escaping from the unilateral and passive management system for vulnerable social group led by the administration, the bilateral, active, and positive participation system where a majority of the public take part in should be created.

The space happened to meet, the space forming the culture and habit of creative community, the space expanding the worth of gender equality in the family and community, you will see here in Seoul.

Design contest will start from 4th. The Seoul City will open the design contest website (http://space-salim.org) and the register will be held until June 6th. Once a designer is determined through the design contest, the construction of the building is planned to start on August 2017 and to be complete by the end of August 2019 after the intermediate and final design process.

Any native and foreign experts of architecture, landscape, and urban design could participate in, and it is possible for up to 5 persons of a co-application.
The reception of works is due on June 17th, and the field presentation at Seoul Women’s Plaza on following 8th will be held in order to help participants to understand about the contest. The examination results will be announced on June 30th.

1 Attractive Public Buildings
– Construct a public building which citizen visit due to uniqueness and attraction the building itself has.
– Create a space where mainly women and families visit and warm/comfortable and innovative/fun space as there are handwork workspace and workshops.

2 Participation-Innovation-Connection Place with Citizen as Owner
– Design the space that people can peep into Space Salim and see various activities and create the space where these activities and people can naturally meet and connected by utilizing public spaces and outdoor spaces.
– It aims for variable space composition to run innovative and fun experiments whenever.
– Allow people to perceive this space as ‘Public Space which I created’ by leaving rooms for citizens to participate on space construction process.

3 Architecture that integrates Gender Equality and Ecological Value
– Reflect gender equality and ecological value on entire building.
Ex) Pedestrian oriented design where people can walk around comfortably by composition of men/women’s restroom (accompany baby), shape and color of pictogram, gender equality graffiti, and locating corridor on center and install elevator around it. 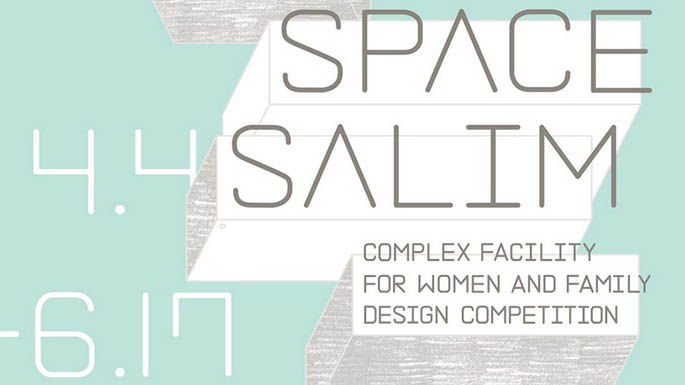